Moving Beyond the “Wow Factor”

Figure 1. A dilated fundus exam led to a diagnosis of quiescent PDR after treatment with PRP laser. 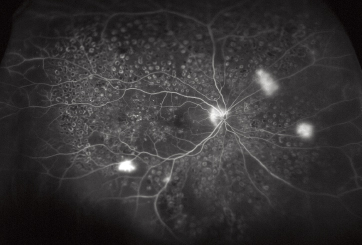 Figure 2. UWFFA revealed extensive areas of peripheral ischemia and active neovascularization that was not detected on the dilated fundus exam.

Dr. Kitchens: I like what the ultra-widefield image can tell me about the seemingly good eye, the 20/20 eye, in patients who present with something going on in the other eye — for example, a vitreous hemorrhage in a diabetic patient. Almost invariably, I identify areas of either vast nonperfusion or “occult” neovascularization of the retina that wasn’t picked up at the time of the examination. I tell these patients they are 20/400 in the eye that bled, but that’s not the eye I’m going to work on. I’m worried about that other eye because if it bleeds, they won’t be able to drive, give themselves their insulin or make it to the doctor. Because I can show this to them with the Optos pictures, they understand that the 20/20 eye could bleed at any time. They readily accept and understand why I want to perform PRP on their “good” eye.

I can administer an anti-VEGF injection in the hemorrhaged eye, or give it time to clear then perform PRP, but it’s critically important to treat that other eye so they don’t end up losing vision bilaterally.

Dr. MacCumber: I recently used the UWFFA on a patient who had a mild vitreous hemorrhage. Sure enough, it showed peripheral neovascularization that had been missed on a standard angiogram just a few months before.

Regarding what Dr. Kitchens mentioned about the fellow eye, it has not been proven yet, but it makes sense to treat those small areas of peripheral nonperfusion as imaged by UWFFA rather than doing a complete PRP, which can end up limiting the patient’s visual field. If patients have lost vision in one eye, they’re already worried about the second, and, as we know, some are suspicious about treatment. With the more targeted laser approach, we tell them we can limit the treatment and follow it with fluorescein angiography. It should be proven with a clinical trial, but it’s a logical next step for exploration.

Dr. Kiss: That’s an important question. My colleagues and I at Weill Cornell evaluated this question systematically. In approximately 10% of more than 200 eyes with diabetic retinopathy that we studied, seven standard field imaging missed pathology that UWFFA detected.3 In addition, we found three distinct patterns of retinopathy: pathology primarily outside of ETDRS 7SF; involvement of both posterior and peripheral retina; and pathology confined to posterior pole. There was also a ‘hotbed’ of diabetic retinopathy just outside the arcades.

In this particular study, we were just asking whether we see more with UWFFA and whether it is clinically relevant. The answer was ‘yes’, it changed how we categorized patient’s disease.

In a second study, to be published in the British Journal of Ophthalmology, we explored how peripheral pathology can relate to the posterior pathology. In diabetic eyes, we saw a correlation between the extent of nonperfusion/ischemia in the periphery, and the presence of macular edema. The next obvious step would be to evaluate targeted peripheral photocoagulation as well as the effect of anti-VEGF in this setting. Seven standard fields cover approximately 100º, and now we’re visualizing about double that, so targeted photocoagulation, either for macular edema or proliferative disease, might play a role.

Dr. Hariprasad: As we conduct research, examining hundreds of UWFFA images, we’re realizing that in patients who have undergone PRP, the neovascularization occurs right at the border of the lasered and non-lasered retina. We see this over and over again. These are the types of hints that start to pop up in these images that will help us to figure out why neovascularization occurs in certain locations that we see clinically.

Dr. Hariprasad: Absolutely. I think when we learn more about targeted retinal photocoagulation, the key will be to overlap a bit into the healthy retina and not just stop at the border. Right at that border, in my experience, is where there is a great deal of activity.

Theoretically, can peripheral nonperfusion have any effect on the macula?

Dr. Kiss: We have only recently begun to talk about this because we hadn’t seen it previously. You cannot describe what you do not see. We’re talking about it now because we’re noticing things in the periphery in several diseases, including macular degeneration, vein occlusion and diabetes. Theoretically, it does make sense. The proof is going to be whether treatment in the periphery changes disease progression. At least now we’re evaluating the peripheral retina and correlating it with disease burden.

In terms of biochemical signals, one can imagine if the peripheral retina is dead, it’s not seeing and probably not contributing considerably to the pathology. However, it’s that dying retina that is calling out for nutrients and for oxygen that we really need to start evaluating and perhaps targeting. We know dying retina sends signals, cytokines, including, but not limited to the VEGF.

An inflammatory cascade also seems to be activated. Therefore, it makes sense to think attacking that area in whatever fashion will yield better patient results.

Dr. Hariprasad: Based on what we know now, can we say this is VEGF mediated?

Dr. Kiss: No, it’s not confined only to VEGF, as it is just one of several of the mediators in the pathological processes of diabetic retinopathy. If we look at the progression of diabetic retinopathy, we can find many aspects that appear very similar to chronic inflammation. In addition to VEGF, we have adhesion molecule (e.g. I-CAM) upregulation, leukocyte and monocyte migration, with further elaboration and upregulation of destructive cytokines. VEGF is important in this process, but it is not the only factor.

Dr. Hariprasad: The Optos 200Tx is the first imaging device that allows ultra-widefield visualization of autofluorescence changes in the retinal pigment epithelium.

Dr. MacCumber: Yes, this is a new frontier. We’re now able to see autofluorescence abnormalities in a variety of conditions. To give just one example, I recently saw a patient with a history of AIDS who had atypical autofluorescence in the periphery. It turns out that these changes were most likely from dideoxyinosine toxicity.

Dr. Kitchens: When we use micropulse laser, it may be important to be able to see where we’ve treated, and autofluorescence may be one of the only ways to visualize it. The Optos system surprises me by capturing these images with a single pass, without averaging or any kind of algorithm. That said, autofluorescence is interesting, but right now it raises more questions than it answers.

Like UWFFA, autofluorescence is adding insight into disease processes, and then it will be a matter of correlating what we see with disease burden. Ultimately, the utility of autofluorescence will come when we can better define how to use the information to treat patients more effectively.

Dr. Hariprasad: Do you feel some sort of correlation exists between macular edema or recalcitrant macular edema and the amount of peripheral nonperfusion quantified by the Optos imaging and software? Might a “tipping point,” so to speak, exist?

Dr. Kitchens: Macular edema in the setting of diabetes is just so variable. It could be VEGF-driven. It could be due to chronic endothelial damage or nonperfusion, which leads to diffuse edema, or it can be tractional. What UWFFA does is begin to provide a roadmap of what we should do in the given situation. Maybe patients with substantial peripheral nonperfusion are better candidates for anti-VEGF treatment than patients with good peripheral perfusion, for example.

Dr. MacCumber: I agree. We also may have an underappreciated retinal neuropathy component. I think we’ll have to approach this with as many different modalities as we can muster. RP