SPONSORED BY ELLEX, INC. AND PRN

The advent of telemedicine heralds a new era in ophthalmology, helping to bridge the gap between physician and patient and offering many benefits for the screening, diagnosis, monitoring and management of eye disease. Advances in computing and telecommunications technology enable ophthalmologists and optometrists to offer a higher standard of care despite geographic distance. Significant cost savings can be realized by using telemedicine instead of annual eye exams.1

Diabetic retinopathy is now considered to be one of the leading causes of vision impairment in the developed world. Experts at the National Institutes of Health estimate that by 2020, there will be more than 7.2 million Americans with diabetic retinopathy. Right now, nearly 26 million Americans have diabetes, and there are an additional 79 million Americans who are pre-diabetic.2 The estimated 20,000 ophthalmologists and 30,000 optometrists in practice aren't nearly enough to screen and treat the aging “Baby Boomer” population, much less the growing population of younger diabetics.

At present, “…fewer patients with diabetes are referred by their primary care physicians for ophthalmic care than would be expected according to guidelines by the American Diabetes Association and the American Academy of Ophthalmology,”3 which suggests that more diabetic patients should be sent for annual eye exams by their GPs. The demand for eye care will increase when that occurs. Furthermore, as demand for eye care grows and the supply of eyecare practitioners fails to keep pace, greater efficiencies will be needed. Because screening exams are associated with only a modest reimbursement, eyecare practitioners should see telemedicine as a viable alternative due to the speed of the interaction and time saved in the office. As a triage tool, telemedicine offers a way to quickly and inexpensively segregate diabetics without retinopathy from those with retinopathy who need additional evaluation and treatment.4 Telemedicine also provides for more coordination of care between specialists who are managing a single patient. A current lack of cooperation and coordination is a weakness in our current system according to Donald Berwick, MD, former Administrator of the Centers for Medicare and Medicaid Services (CMS).5

The standard of care for diabetic patients is an annual fundus exam by a qualified eyecare provider.6,7 With early detection and treatment of diabetic eye disease, vision loss can be mitigated.8 Unfortunately, only 30% to 60% of individuals with eye disease receive a yearly eye exam.9,10 Telemedicine has the potential to increase the number of patients being screened for eye disease; it has been shown to provide cost-effectiveness and total savings in terms of public health spending.11 The National Quality Forum has endorsed eye screening for diabetic retinal disease (NQF 0055) using fundus photography in which results are read by a qualified reading center.12 It's already common in the Veterans' Administration to use remote imaging when an eyecare provider is not immediately available.13 Clinical trials commonly use image-reading centers, and other organizations have used remote imaging as a way to expand the number of patients screened.4

Telemedicine isn't just for eye care, either — Healthcare IT News predicts that the world market for telehealth will expand at a compound annual growth rate of 55% or more in the next 5 years.14

Two new CPT codes, 92227 and 92228, for remote imaging were introduced in 2011. In CPT Changes: An Insider's View 2011, published by the AMA,15 the rationale for establishing these new telemedicine codes was to “…meet the needs of diabetic retinopathy screening programs which provide remote imaging and data submission to a centralized reading center.” This ignited an interest among eyecare providers, particularly in areas where diabetic screening is most needed. 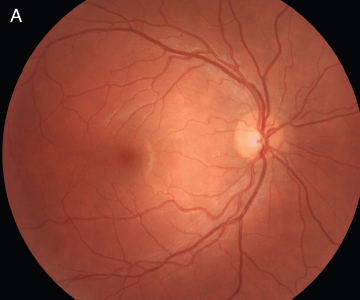 An Ellex drs image of a healthy retina (A) and a patient with diabetes (B).

Very little guidance has been published on these codes and how they should be used.16 Some speculate that only primary care providers should use these codes, while others consider believe they can be used by primary care and eyecare providers. To further confound matters, the longstanding fundus photography code, 92250, may also apply in some settings and under some circumstances. The relevant CPT codes are described as:

92227 — Remote imaging for detection of retinal disease (e.g., retinopathy in a patient with diabetes) with analysis and report under physician supervision, unilateral or bilateral

92250 — Fundus photography with interpretation and report

A comparison of the three CPT codes reveals some nuances that should be considered for claims submission (Table 1). Since 92227 doesn't take into account physician interpretation (i.e., no relative value unit (RVU) assigned for a technical and professional component), and isn't used for previously identified retinopathy, it's not a suitable choice when an ophthalmologist or optometrist is an essential part of the telemedicine protocol. Conversely, code 92228 does contemplate an ophthalmologist's or optometrist's involvement, does require an interpretation, and is only used for monitoring and management of patients with previously identified retinopathy (not just diabetes); it would be a suitable choice for a telemedicine program except for screening. As currently defined, only 92250 accurately describes telemedicine screening by an eyecare practitioner, physician interpretation and written report.

The RVUs assigned by CMS to 92227 and 92228 are substantially lower than for 92250. It is likely that payers would prefer the new codes for this reason.

Claims for reimbursement are further affected by other considerations.

► Who owns the camera?
► Where is the camera physically located?
► Who employs the assistants or technicians taking the photographs?

Which party may bill for taking the images is a function of who owns the fundus camera and supervises the medical assistant or technician. The place of service (i.e., clinic, hospital) and its geographic location determine the applicable payment rate. Note that we do not assume that the camera and the reading center are subject to the same geographic practice cost indices (GPCI). Which party may bill for the interpretation of the fundus images is a matter of authorship. In other words, the physician who analyzes the image and makes a diagnosis bills for his or her work. Each party bills only for the services he or she delivers. Before any billing takes place, proper credentialing is required for each provider and location. There may also be important legal considerations that impact telemedicine arrangements.

COVERAGE BY MEDICARE AND OTHER PAYERS

Under the Medicare law, coverage exists for services performed “... for the diagnosis or treatment of illness or injury or to improve the functioning of a malformed body member” as set forth in the Social Security Act §1862(a)(1)(A). Screening for a disease that might or might not be present doesn't meet this requirement, and unless specifically covered elsewhere in the Act (e.g., glaucoma screening), is not a Medicare benefit. While other third-party payers often have coverage rules that are similar to those of Medicare, they don't have to be the same.

In cases where coverage is unlikely or expressly denied,19 use a financial waiver such as an Advance Beneficiary Notice prior to taking the images.

HIPAA security is a significant consideration to avoid the inadvertent disclosure of protected health information (PHI). Be sure that a HIPAA-compliant system of image safeguard and transmission is in place for both the transmitting and receiving systems.

Since telemedicine provides a triage mechanism for sorting patients who need further evaluation and treatment for diabetic retinopathy, it may be an important source of referrals for ophthalmologists and optometrists from PCPs for services that probably will be covered and paid for by Medicare or other third-party payers. As such, eyecare specialists must be careful to avoid providing PCPs with anything of value that could be construed as a means of soliciting a referral. The Medicare Antikickback Statute20 makes it a crime to offer remuneration in return for referrals. Similar state laws complement this federal law. To avoid this legal jeopardy, a number of safe harbors exist to insulate individuals and entities from prosecution under the Antikickback Statute for conduct, which would otherwise violate the Antikickback Statute. For physicians in Texas, the Medical Board has issued guidance21 on the use of telemedicine as it relates to licensure for its members. Check your state's laws, regulations and guidelines for specific instructions.

THE PROS OF TELEMEDICINE

Telemedicine provides a reliable, cost-effective means of screening diabetic patients for retinopathy, which can lead to blindness. Since the number of diabetics in the United States is growing fast, but the supply of eye-care practitioners is not, healthcare resources are strained and becoming more so. Certainly, not every diabetic now receives the standard of care, an annual eye exam, but that situation will likely worsen unless alternative healthcare delivery systems are employed to address it. With new, easy-to-use, non-mydriatic cameras, nurses and medical assistants without any ophthalmic training can learn to take excellent fundus photographs. These images can be transmitted to a reading center where they can be expertly assessed.
This new methodology has already been adopted in a number of high profile institutions and also is part of the HEDIS standards for comprehensive diabetic care. Payers are slowly coming on board since CPT was amended in 2011 with two codes uniquely defined for this purpose: 92227 and 92228. Ophthalmologists and optometrists will likely find increasing use for telemedicine in the future, and not just for diabetes.