“In any business, time and space equal money, and by combining a high-resolution OCT with fundus photography, you certainly save both by not having to purchase multiple devices and minimizing patient movement,” says Nikolas J.S. London, MD, FACS, director of clinical research, Retina Consultants San Diego in Poway, California, who uses the device. “Furthermore, Optos is possibly the gold standard for widefield imaging.”

Dr. London has found that the combination of UWF photos and OCT provides an immense amount of data, and greatly reduces the chance that pathology is missed. “This is particularly useful in a busy clinic where you may not have time to shuffle patients between several different cameras,” he says.

Having optomap ultrawidefield photography combined with OCT is also advantageous because optomap has been shown to enhance disease management, Amodei says. According to an internal study, optomap revealed that 66% of pathology is outside of the area visualized by traditional small field imaging.1 Another study showed that optomap-assisted ophthalmoscopy identified 30% more retinal lesions than traditional binocular indirect ophthalmoscopy.2 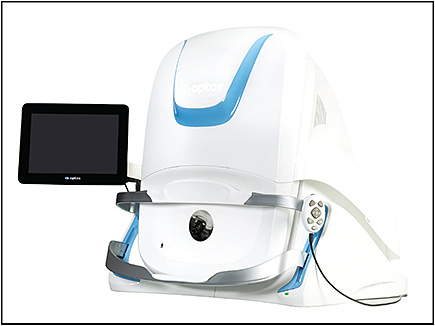 Dr. London finds the device useful for all of his patients, most of whom have vision abnormalities. “My clinic runs much more efficiently by simply having imaging with color photos and spectral-domain OCT as a routine part of a workup prior examining a patient,” he says. “I have all the data I need to care for each patient and there is minimal time wasted transferring patients back and forth between clinic rooms.”

Monaco is user friendly and easy to train on. To capture an image, the patient sits comfortably in front of the device. As the patient looks into the device, a blue target will appear. The operator will then adjust the device to the correct orientation and capture the image or sequence of images.

Dr. London can attest to Monaco’s user friendliness. “It is extremely easy to capture images, and the user interface is intuitive and easy to use in the review software,” he says. “No focusing is required when taking images — roughly position the patient’s head and then give direct feedback to guide the patient into the perfect position.”

The Monaco nonmydriatic, noncontact technology can capture an UWF optomap and OCT scan in as little as 90 seconds, making the experience both quick and comfortable for the patient. “Monaco can also capture an optomap image through cataracts 85% of the time3 as well as for patients with 2 mm pupils, helping to ensure that these patients, who may otherwise have been difficult to image, can be thoroughly evaluated,” Amodei says.

Any optomap image captured with Monaco can potentially benefit a patient because of earlier detection and diagnosis, particularly given that early signs of disease often manifest in the periphery. In fact, optomap AF revealed peripheral abnormalities outside of the area captured by traditional small field imaging in 97% of AMD patients.4

“Once patients are diagnosed, they can be monitored more effectively because disease progression can be assessed by comparing new optomap images and OCT scans with those from previous evaluations,” Amodei says.

A study by Horton et al found that optomap images reduce the ungradable rate over traditional small field imaging by 81%,5 and another by Silva et al found that it reduces image evaluation time by 28%.6 Also, Tornambe reported that implementing optomap can result in physicians seeing an average of 1.5 additional patients per day.7 RP