Fundus Autofluorescence in Retinal Disease: A Review and Perspectives

The second of a two-part series

In the first part of this series, which appeared in the last issue of Retinal Physician, we provided an overview of fundus autofluorescence (FAF) imaging technologies (Table), and we reviewed the factors that produce and can affect fluorescence. In this second part, we apply these concepts to specific retinal conditions.

Age-related macular degeneration has been characterized by FAF, and unique FAF findings not otherwise seen with funduscopy or other imaging systems are valuable in determining the diagnosis, management, and prognosis of the disease.

Madeline Yung, MD, is an intern at Olive View-UCLA Medical Center in Los Angeles, CA. David Sarraf, MD, is on the faculty of the Stein Eye Institute at UCLA. Dr. Sarraf has received research grants from Allergan, Genentech, Optovue, and Regeneron, and he is a consultant to Genentech and Optovue. Dr. Yung reports no financial interests. Dr. Sarraf can be reached via e-mail at dsarraf@g.ucla.edu.

On FAF, geographic atrophy manifests as sharply demarcated areas of hypoautofluorescence due to RPE atrophy. Holz et al identified five different patterns of perilesional hyperautofluorescence that can surround areas of geographic atrophy — none, focal, banded, patchy, and diffuse — with the diffuse pattern further subdivided into reticular, branching, trickling, fine granular, and fine granular with peripheral punctate spots.9 The banded and diffuse trickling patterns have been associated with high risk for disease progression.

As a well-known complication of AMD, RPE tears present as a wedge- or crescent-shaped area of remarkable hypoautofluorescence with sharp, irregular borders representing the zone of denuded RPE, and adjacent hyperautofluorescence at the site of rolled retracted RPE (Figure 1). Over time, RPE tears undergo resurfacing, with recovery of autofluorescence and associated visual function occurring centripetally toward the center of the lesion (Figure 2).15-18

Figure 1. Sequential FAF of RPE tear. RPE tears (a) appear as well-demarcated central hypoautofluorescence due to absent RPE with adjacent irregular hyperautofluorescence corresponding to the retracted edges of RPE. Serial images obtained three weeks (b) and one year (c) later show resurfacing and remodeling of the lesion, with centripetal recovery of autofluorescence extending from the borders.
COURTESY OF BIOMED CENTRAL. 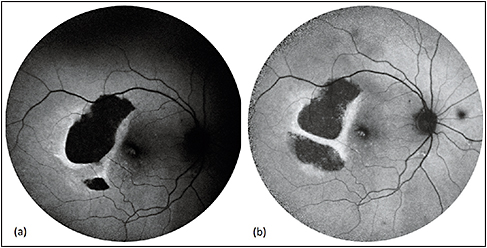 Figure 2. Sequential FAF of RPE tear treated with aflibercept. RPE tears (a) appear as a well-demarcated central hypoautofluorescence due to absent RPE with adjacent irregular hyperautofluorescence corresponding to the retracted edges of RPE. The patient received anti-VEGF therapy with half-dose aflibercept. Over time (b), the lesion shows evidence of remodeling and resurfacing, with centripetal recovery of autofluorescence.
COURTESY OF WOLTERS KLUWER

In central serous chorioretinopathy, RPE and choroidal dysfunction results in accumulation of subretinal fluid and serous retinal detachment. Near-infrared (NI)-FAF has superior sensitivity over short-wavelength (SW)-FAF in detecting abnormalities,19 and ultrawidefield FAF is an essential component of imaging evaluation because 57% of CSC cases involve the peripheral retina.20,21 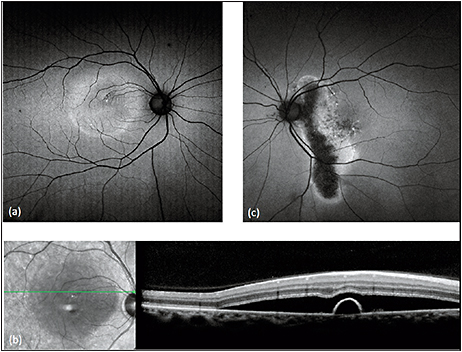 Stargardt disease is a hereditary juvenile macular dystrophy resulting from autosomal recessive mutations in the ABCA4 gene and, in rare cases, autosomal dominant mutations in the ELOVL4 gene. The salient retinal findings include central macular atrophy (hypoautofluorescent on FAF) in a bull’s eye or geographic pattern and surrounding yellow flecks that exhibit peripapillary sparing.26,27 Active flecks are hyperautofluorescent, while resorbed flecks are hypoautofluorescent (Figure 4). 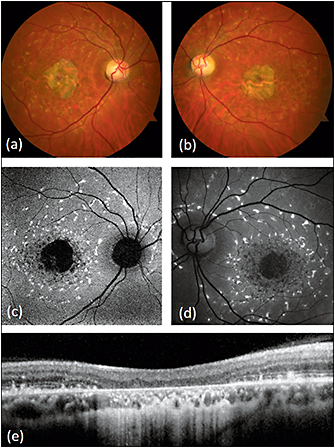 FAF is sensitive for abnormalities early in the disease course and can be used in the diagnostic evaluation for Stargardt disease.28

Pattern dystrophies encompass a collection of late-onset macular dystrophies with a stable, benign course, primarily resulting from autosomal dominant mutations in the PRPH2 gene (formerly the RDS gene).34 These dystrophies display a wide range of phenotypic variability, and FAF can be useful in disease diagnosis.35

Adult onset vitelliform dystrophy (AOVD) manifests as small, bilateral, hyperautofluorescent vitelliform lesions that are usually subfoveal but can be multifocal.36 As the disease progresses, RPE atrophy causes regions of hypoautofluorescence.37

Parodi et al found that AOVD progressed through normal, then focal, and finally patchy SW-FAF patterns, which correlate with deteriorating visual function.38 NI-FAF is more sensitive than SW-FAF for the detection of abnormalities.

As suggested by its name, multifocal pattern dystrophy simulating fundus flavimaculatus presents as a flecked retina syndrome, with hyperautofluorescent flecks at the posterior pole and vascular arcades. However, unlike Stargardt, this disease has an autosomal dominant inheritance, late onset, normal appearance of the choroid, and absence of hypoautofluorescent atrophy of the central macula.39

Other pattern dystrophies, including butterfly pigment dystrophy, fundus pulverulentus, and reticular dystrophy, are not yet well characterized by FAF. However, FAF can be used to identify more sensitively the remarkable hyperautofluorescent butterfly or reticular patterns characteristic of these diseases.

On FAF, a large subset of patients with RP demonstrates a hyperautofluorescent Robson-Holder ring, which represents the border of active outer segment dysgenesis and abnormal lipofuscin production (Figure 5).42-45 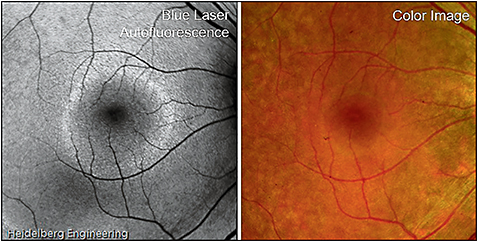 Optical coherence tomography studies have shown photoreceptor loss outside the ring and normal retina within. In addition, the diameter of the ring corresponds with retinal sensitivity and visual field constriction — the more the ring encroaches centrally, the more constricted the visual field is.46 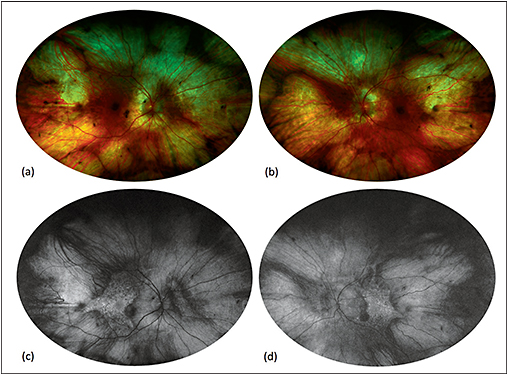 Interestingly, female carriers of the CHM mutation are asymptomatic but may demonstrate a peripheral speckled pattern of hyper- and hypoautofluorescence, underscoring the value of FAF in evaluating the female relatives of affected patients.49,51

The white spots seen on funduscopy correlate with the foci of relatively enhanced autofluorescent signals, although these foci are often not visible on FAF given the overall decreased background autofluorescence.56 Other flecked retina syndromes not associated with an RDH5 mutation produce hyperautofluorescent dots with FAF. Hyperautofluorescent crescents and concentric parafoveal rings have also been reported with fundus albipunctatus.

White dot syndromes include a diverse collection of inflammatory chorioretinopathies with the common phenotype of multifocal white or yellow spots in the posterior pole and peripheral fundus. White dot syndromes vary significantly in pathogenesis, treatment, and prognosis.60 FAF and widefield FAF are sensitive tools for detecting lesions and differentiating diseases.61,62

Multiple evanescent white dot syndrome (MEWDS) is a self-limited, unilateral disorder that affects young, healthy women. Funduscopy shows multifocal 100- to 200-µm white spots in the paramacular and midperipheral fundus, which are hyperautofluorescent due to a window defect from photoreceptor loss (Figure 8).63 FAF can show hypoautofluorescence at the fovea, and it is more sensitive than clinical exam or fluorescein angiography for detecting lesions.64 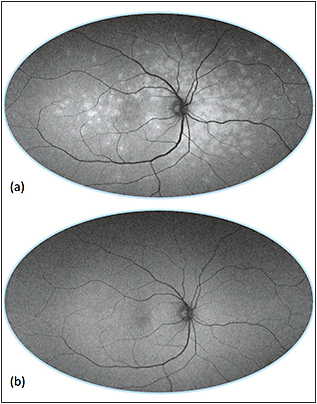 Punctate inner choroidopathy occurs in young, myopic female subjects and is a diagnosis of exclusion, occurring in the absence of uveitis or presumed ocular histoplasmosis. The white dots represent sub-RPE nodules that can have minimal hyperautofluorescence.65

Punctate inner choroidopathy may be associated with CNV, which has similar FAF findings to the CNV in AMD.65 Ninety percent of patients with diffuse hyperautofluorescent patches were found to have concurrent MEWDS on multimodal imaging.67

In Caucasians, toxicity manifests as parafoveal photoreceptor loss with foveal sparing, resulting in a hyperautofluorescent parafoveal ring due to the window defect, with decreasing autofluorescence over time as the RPE progressively atrophies, and in advanced cases, progression to a characteristic bull’s eye maculopathy.68

Recent studies have found that Asians tend to have a more eccentric pericentral pattern of toxicity (a pericentral hyperautofluorescent ring is identified with FAF), with a hazard ratio of 27.1, which is more difficult to recognize on standard screening.69

The 2016 guidelines from the American Academy of Ophthalmology recommend a baseline examination and then annual screening with spectral-domain optical coherence tomography and perimetry starting after five years of standard use.70 FAF can be used as a supplemental imaging modality to detect early photoreceptor degeneration, to provide a topographic map of retinal toxicity, and to show extramacular patterns in Asian eyes.70

FAF is a noninvasive retinal imaging modality with rapid acquisition that detects the natural autofluorescence of ocular fluorophores. SW-FAF reflects the topography of lipofuscin and can be visualized using several imaging systems, including fundus cameras, confocal scanning laser ophthalmoscopes, and ultrawidefield systems.

FAF can detect abnormalities not otherwise identified with clinical examination, color fundus photography, FA, spectral-domain optical coherence tomography, and other techniques, and it can identify signature phenotypes facilitating the diagnosis of a wide variety of retinal disorders. In short, FAF has become a rapidly evolving and valuable tool in the evaluation and management of retinal disease. RP