Sutureless Scleral Buckle as an Adjunct to PPV

An innovative technique for the management of difficult retinal detachments

In the modern era of primary pars plana vitrectomy (PPV) including microincision vitrectomy surgery (MIVS), the use of scleral buckle for the repair of rhegmatogenous retinal detachment (RRD) is on the decline.1,2 In my own practice, scleral buckle as a primary procedure is mainly employed in the management of retinal detachments in phakic patients and in those caused by dialysis.3,4

The addition of scleral buckle to vitrectomy (PPVSB), the so-called vit-buckle procedure, was shown to improve the single-surgery anatomical success (SSAS) rate in a recent meta-analysis.5 Additionally, eyes treated with PPVSB were more likely to be macula-off and to contain inferior breaks.5 Comparative studies of PPV and PPVSB procedures are summarized in the Table.6-19

Most published studies have been retrospective, lacking uniform surgical techniques, and they are at risk for bias in case selection. An encircling scleral buckle, first introduced by Schepens in 1957,20 supports the vitreous base, redistributes vector forces resulting from peripheral membranes or vitreous contraction,21 reduces circumference of the globe to counteract pre-existing or postoperative circumferential shortening of the retina (Figure 1), and provides indentation for a more thorough “shaving” of vitreous base and peripheral laser.

Figure 1. Circumferential peripheral gliosis, photographed intraoperatively during silicone oil removal, is common in eyes with complex retinal detachments despite meticulous shaving of the vitreous base.

Kamal Kishore, MBBS, MD, practices with Illinois Retina and Eye Associates in Peoria. He reports no financial interests in any products mentioned in this article. Dr. Kishore can be reached via e-mail at kamal.kishore1963@gmail.com.

An ideal buckle used in conjunction with vitrectomy can be summarized as follows:

1. It should support the posterior edge of the vitreous base, located approximately 4 mm behind the ora in an average eye.22 The age old adage in which the buckle was placed so that the posterior edge of the most posterior retinal break would settle on the crest of the buckle to efficiently and effectively close the break is no longer relevant in the era of vitrectomy and endotamponade.

2. Most of the “buckling effect” or indentation should be internal, with minimal external or episcleral bulge to minimize discomfort.

3. It should not cause compression of vortex veins or ocular ischemia. Arruga-style23 buckles that rendered an eye somewhat resembling an hourglass were effective at the time of their invention, but they caused an acceptably high rate of anterior-segment ischemia and should be avoided.

While I am fully aware of the strong opinions on the merit of adjunct buckling in association with vitrectomy, my personal indications for adding an adjunct buckle can be summarized in the following categories:

2. Eyes with proliferative vitreoretinopathy or those at risk for PVR9,24

3. Difficult view of the periphery due to extensive peripheral capsular opacification, cataract, or small pupils25

4. Patients with tightly adherent posterior hyaloid, young age, or eyes with history of retinopathy of prematurity — in many of these eyes, it is impossible to “peel” the posterior hyaloid beyond midperiphery for fear of causing iatrogenic retinal breaks; buckle along with scatter laser over the buckle may provide protection against formation of new breaks due to further contraction of posterior hyaloid

5. Phakic eyes — although such eyes are primarily treated with SB procedures, if PPV is performed, I tend to add a buckle due to the inherent difficulty in performing thorough shaving of peripheral vitreous due to crystalline lens12; refractive shift induced by the buckle is not relevant in this group due to the need for cataract surgery, usually within a few months after RD surgery

Ronald G. Michels, MD, provided a detailed description of the belt loop technique for fixation of scleral buckle in 1986.26 Belt loops provide a broader buckling effect compared to suture fixation,26 and they eliminate complications related to sutures,27 such as penetration of the globe,28 erosion, irritation, and infection (Figure 2). 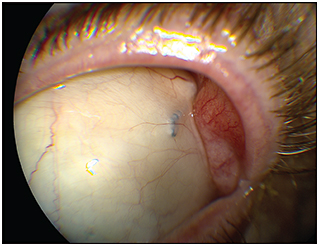 I was introduced to belt-loop assisted fixation of a 41 band by Charles Campbell, MD, of Corpus Christi, TX, in 1998. He used an Alcon (Fort Worth, TX) crescent blade both to make radial incisions and to perform lamellar dissection to secure a 41 band. A similar technique was described in a recent publication.27 My interest in this procedure was renewed after watching an excellent video presentation by Edward H. Ryan.29

Over the years, I have used scleral belt loops to fixate the haptics of a three-piece IOL in the absence of adequate capsular support.30 My surgical technique to create belt loops for the fixation of a 41 band was presented as a film festival entry at the annual meeting of the American Society of Retina Specialists in Vienna in 2015 (Video online)31 and, with slight evolution, is described below.

There are two steps to create belt loops: radial incisions and the creation of a scleral tunnel. To create the former, I have previously used #57 and #64 Beaver (Beaver Visitec, Waltham, MA) or Alcon crescent blades, but I currently use a limbal relaxing incision (LRI) diamond blade (Mastel, Rapid City, SD) on a PhDII step handle set at the lowest, 300-µm depth to produce perfect radial incision at a preset depth every time.

As the name implies, this blade is commonly used by cataract surgeons to create LRIs for control of astigmatism, and it is likely available in your operating room. With proper care and handling, the blade is designed for unlimited use. Thickness of the equatorial sclera of enucleated human globe is approximately 500 µm in the average human eye.32 Therefore, a guarded blade with its depth set at 250-300 µm will produce an approximately 50% to 60% deep incision.

Marks are placed on the sclera 2 to 3 mm behind the muscle insertion with calipers set at 3 mm to create the corners of a square (Figure 3A). Starting distance from the spiral of Tillaux (level of muscle insertion) is adjusted to keep the posterior limit of the belt loop at or slightly anterior to the equator. 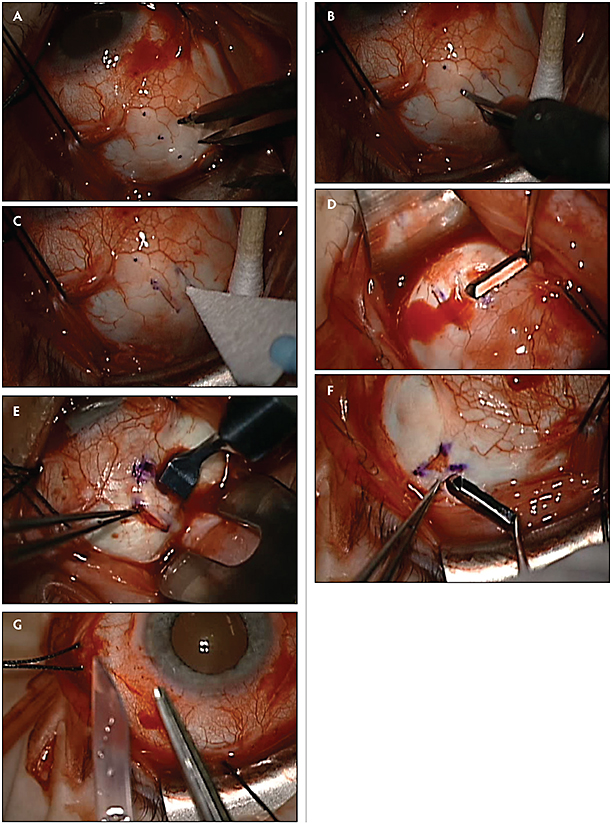 Figure 3. (A) Marks are placed with calipers set at 3 mm to mark corners of a 3 mm x 3 mm square positioned 3 mm behind the spiral of Tillaux. (B) Guarded diamond blade set at 300 μm, making second radial incision for the belt loop. (C) Weck-Cel sponge is applied to wipe away blood, verify appropriate depth of radial incision, and gently separate lips of the incision. (D) Scleral tunneling is begun by placing the dissector at the base of the incision and depressing it slightly, followed by forward and side to side movements to engage the tissue. (E) Slight counter-pressure with a pair of forceps holding the distal lip of the radial incision allows the dissector, in this case a sapphire blade (Katalyst Surgical), to exit the tunnel. (F) Stabilize the globe by holding the edge of radial incision with a pair of 0.12-mm forceps, and slide the dissector beneath a thin sheet of scleral fibers in eyes with moderately thin sclera. (G) Cut a #41 band at an acute angle and rounding of shoulder to allow for easy passage through tunnels.

Radial incisions are made with the blade held vertically and moving it in one smooth firm motion to connect the posterior set of marks to the anterior set, preferably moving the blade in the posterior to anterior direction (Figure 3B). Cautery application to the sclera causes scleral shrinkage and should be avoided.

The first belt loop is made in the inferonasal quadrant, as sclera tends to be thickest in that quadrant. A Weck-Cel (Beaver) ophthalmic sponge is used to wipe away blood, verify adequate incision depth, and gently separate the lips of the incision (Figure 3C).

A #66 Beaver blade (2.5 mm wide, $63 for a box of three), Castroviejo corneal lamellar dissector (Bausch + Lomb, Rochester, NY; 1.5 mm x 5 mm, $273), or a Dhaliwal sapphire crescent blade (Katalyst Surgical, Chesterfield, MO; width 2.75 mm, $675 for a box of five) is placed in the depth of the incision, depressed gently, and advanced forward, being moved from side to side until it approaches the distal radial incision (Figure 3D).

At this point, the blade is angled up slightly to allow it to exit. If needed, slight pressure on the distal edge of the radial incision with a pair of forceps will redirect the blade and allow it to exit the wound (Figure 3E). The tunnel is completed with further side-to-side motion.

Although the #41 band is 3.5 mm wide, it will fit in a 3-mm tunnel by gently stretching it as it is advanced. A tunnel that is too wide will encourage anterior slippage of the band. Three millimeters of length is adequate to fixate the band. Hence, a general rule of thumb is to make the tunnel 3 mm posterior to muscle insertion, set the blade at 300 µm, and make the tunnel 3 mm long and 3 mm wide.

If the radial incisions are made relatively shallow, as in cases with scleral thinning, the edge of the radial incision is held with a pair of 0.12-mm forceps, and a dissector is inserted beneath a thin sheet of scleral fibers to create the tunnel (Figure 3F). It is usually sufficient to hold a #41 band. Alternatively, as suggested by Dr. Ryan, sutures may be used in areas with significant scleral thinning.29

The #41 band is cut acutely at an approximately 30º, and the shoulder, the sharp corner where the cut edge meets the band, is rounded with scissors (Figure 3G). The band is passed through each belt loop and under each rectus muscle. The ends are passed through a Watzke sleeve (#70) in the superonasal quadrant, overlapped by 6 mm, and trimmed.

A 25-gauge PPV procedure to repair RD is performed in the usual fashion. Most cases are treated with gas, either 20% SF6 or 12-14% C3F8 endotamponade. At the end of the case, each sclerotomy is closed with a single 7-0 Vicryl suture (Johnson and Johnson, New Brunswick, NJ), followed by conjunctival closure with 6-0 plain catgut sutures.

A 49-year-old woman was referred for acute postoperative endophthalmitis one day after an uncomplicated vitrectomy procedure for macular pucker. She was treated with intravitreal antibiotics on the same day. Cultures grew Staphylococcus mutans. Repeat PPV without lensectomy was done two days later, along with reinjection of vancomycin, which led to resolution of endophthalmitis.

However, she developed a temporal RD two weeks later with no visible break. A vit-buckle procedure was performed with drainage of subretinal fluid through a drain retinotomy, created by the application of gentle cautery, followed by penetration with an Alcon 25-gauge, 0.8-mm, soft-tipped extrusion needle designed for valved cannulas, fluid-fluid exchange followed by fluid-air exchange, light endolaser for 360º over the buckle, and finally exchange of air for 12% C3F8 gas-air mixture (Figure 4). 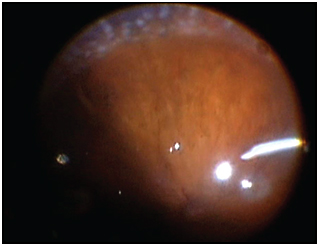 Figure 4. Case 1. Appearance at the end of the case showing good buckle height and placement and good peripheral laser.

A 22-year-old woman with a history of peripheral laser ablation for retinopathy of prematurity in the right eye presented with a chronic temporal retinal detachment in the left eye caused by multiple retinal breaks at the border of normal and avascular retina, extensive lattice degeneration, and no PVD (Figure 5). 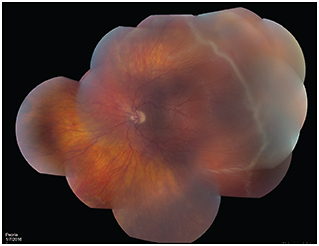 Intraoperatively, an extremely adherent posterior hyaloid was removed with great difficulty only up to the midperiphery using an Alcon Nitinol loop (Figure 6), a Tano scraper, and an extrusion needle, assisted by visualization with triamcinolone acetonide. A vit-buckle procedure without lens removal was performed, subretinal fluid was drained through the peripheral break using Perfluoron (Alcon), and 14% C3F8 gas tamponade was used with successful results (Figure 7). 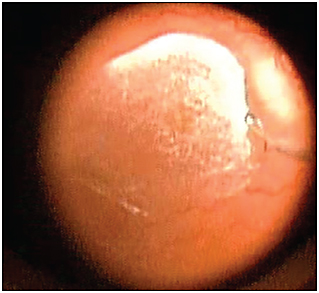 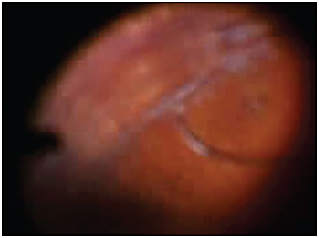 This article describes a simple and reproducible technique to create belt loops for sutureless fixation of a #41 band, either alone or as an adjunct to vitrectomy in selected cases. While adding a scleral buckle to an otherwise MIVS case may add 10-15 minutes to the procedure,17,18 and due to temporary discomfort primarily caused by conjunctival sutures, it potentially negates the major advantages of MIVS, it might offer an improved single surgery success rate, particularly in cases with a higher risk of failure of primary PPV for RRD. RP