Strategies for the Treatment of Recalcitrant DME

Diabetic macular edema is one of the leading causes of vision loss worldwide. Intravitreal anti-VEGF agents have recently become the initial treatment choice for the majority of patients with DME. However, not all patients manifest complete resolution of edema, despite multiple intravitreal anti-VEGF injections. DRCRnet Protocol I showed that more than 40% of ranibizumab (Lucentis, Genentech, South San Francisco, CA)-treated eyes did not achieve complete resolution of macular edema.1

Such cases are challenging to treat due to both the complex underlying physiological processes and the lack of prospective, randomized clinical trial data focused specifically on recalcitrant DME. This article will review current medical, surgical, and laser strategies to approach recalcitrant DME.

Diabetic macular edema results from a complex cascade of interwoven biochemical processes and anatomical changes. Chronic hyperglycemia leads to the formation and accumulation of advanced glycation end-products (AGEs), which cause alterations to the structural and cellular components of the retinal microvasculature.

Meenakashi Gupta, MD, is a vitreoretinal surgeon and assistant professor of ophthalmology at the New York Eye and Ear Infirmary of Mount Sinai Hospital in New York, NY. She reports no financial interests in products mentioned in this article. She can be reached via e-mail at meenakashi.gupta@gmail.com.

Continued retinal microvasculature damage leads to capillary nonperfusion and retina ischemia, which in turn result in upregulation of angiogenic factors. VEGF, which is one these factors, not only plays a key role in angiogenesis, but it also increases vascular permeability.

A retrospective study of patients with a history of DME found that hemoglobin A1c levels were greater in patients whose DME persisted than in patients whose DME resolved.6 Ongoing communication with a patient’s primary care provider and endocrinologist regarding the patient’s ocular status is essential. Worsening ocular health can influence the decision to pursue tighter control of systemic factors.

The authors proposed that the areas of untreated ischemic retina produce increased levels of intraocular VEGF and other cytokines, which potentiate vascular permeability, contributing to the development of recalcitrant DME. Obtaining FA to assess patients with recalcitrant DME and applying targeted retinal photocoagulation to regions of nonperfusion may assist in controlling recalcitrant edema.

Corticosteroid implants appear to play a special role in the treatment of chronic DME unresponsive to anti-VEGF therapy (Figure 1). Several authors have suggested that DME may shift from a primarily VEGF-mediated process in the acute stages to an inflammatory disease in the chronic stages, explaining why select patients do not improve despite anti-VEGF therapy.3,8

Figure 1. A) OCT of a patient with chronic DME unresponsive to intravitreal bevacizumab. Visual acuity was 20/100. B) OCT 2.5 weeks after injection of dexamethasone implant showing resolution of edema with restoration of the foveal contour. Vision improved to 20/60.

Pharmacologically, corticosteroids stabilize the BRB by downregulating the expression of VEGF and inhibiting the production of prostaglandins and proinflammatory cytokines. They also decrease expression of intracellular adhesion molecule (ICAM), allowing for stabilization of tight endothelial cell junctions and decreasing vascular permeability.4

Intravitreal steroid injections delivery a high initial dose but clear rapidly with greatest efficacy at approximately one month.8 The DEX implant gradually erodes, releasing steroid at a fairly steady rate over the course of three to four months. The FAc implant provides a small controlled dose of steroid for up to three years.

The efficacy of steroids has been shown in several studies. Of particular interest is a preplanned subgroup analysis of the FAME study,8 which compared the efficacy of the FAc implant in persistent DME after one or more laser therapy treatments in the chronic (≥3 years) vs non-chronic (<3 years) state.

At month 36, the difference between the FAc implant and sham control in the percentage of patients who gained 15 letters or more was significantly greater in chronic DME patients, compared with patients with nonchronic DME.

Currently, study data for patients with recalcitrant macular edema unresponsive to anti-VEGF therapy are limited. However, a small, retrospective study of patients with DME with poor response to six monthly, consecutive intravitreal injections of ranibizumab found an improvement in vision and a decrease in central macular thickness following DEX injection.10

Many retina specialists have found the combination of anti-VEGF treatment and corticosteroids effective for recalcitrant DME in their clinical practices. The combined approach may allow for more extensive control of the complex pathways involved in DME.

Furthermore, the synergistic effect of sustained-release corticosteroids may result in the patient requiring fewer anti-VEGF injections to keep the DME under control. There have been no large, published studies on combined therapy. Treatment paradigms vary widely.

Currently, the DRCRnet is conducting a randomized, controlled trial to compare the efficacy of combination therapy with ranibizumab and DEX to continued therapy of ranibizumab in the treatment of persistent DME after anti-VEGF therapy. The results of this study will be very helpful in understanding the role of combined therapy. 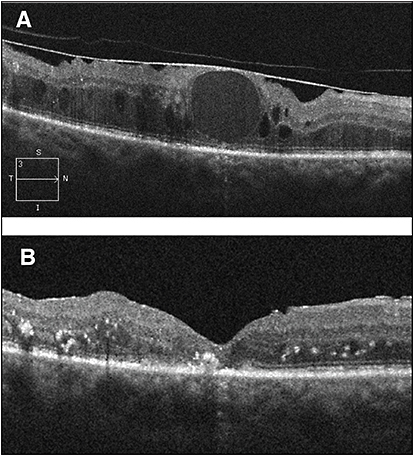 Figure 2. A) OCT of a patient with recalcitrant DME unresponsive to intravitreal bevacizumab and triamcinolone. Visual acuity was 20/200. The posterior hyaloid thickened and was taut with striae on clinical exam. Multiple vitreomacular adhesions over the fovea with underlying retinal edema are visible on OCT. B) Postoperative OCT two months after vitrectomy with hyaloid removal demonstrated marked improvement in edema and restoration of the foveal contour with some central outer retina disruption. Vision improved to 20/80. 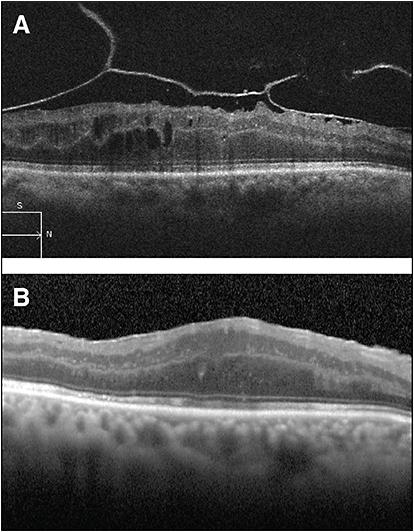 Figure 3. A) OCT of a patient with chronic DME. Visual acuity was 20/150. A partial hyaloid detachment with multiple vitreomacular adhesions around the fovea with underlying retinal edema is visible. B) Postoperative OCT following vitrectomy with hyaloid removal and ILM peeling. Vision improved to 20/80.

Unique pathological alterations to the vitreomacular interface in the diabetic patient can lead to macular traction. Accumulation of AGEs in the diabetic vitreous leads to structural alterations of the posterior hyaloid and internal limiting membrane, strengthening the adhesion of the posterior vitreous cortex to the ILM.5 Sustained hyperglycemia affects biochemical cascades, leading to destabilization of the vitreous gel.5

These factors together can lead to the formation of an incomplete posterior vitreous detachment or vitreoschisis while leaving a persistent adhesion of the posterior cortical vitreous to the macula. In certain cases, these firm adhesions can lead to VMT.

Epiretinal membranes, common in diabetic patients,13 can also cause macular traction. The diabetic retina already compromised by microvascular abnormalities may be particularly vulnerable to increased exudation with these various tractional forces.5

Surgical intervention for recalcitrant DME includes pars plana vitrectomy with detachment of the posterior hyaloid and peeling of any associated ERMs, with or without ILM removal. The overall goal is to alleviate traction by removing the causative elements.

Removal of the vitreous gel can have the additional benefit of decreasing the concentration of DME-promoting factors, such as AGEs, VEGF, and ICAM-1, which accumulate in the vitreous.5 Some studies have also shown an improvement in fluid currents following vitrectomy, which may increase oxygenation of the inner retina.14

Evaluating the status of the vitreomacular interface is key to determining which patients may benefit from surgery. Biomicroscopy and optical coherence tomography are essential to determining the presence of a PVD and tractional elements. B-scan ultrasound may be helpful when the status of the posterior hyaloid cannot be determined by exam and OCT.

Several small, uncontrolled studies have suggested anatomic and visual benefits with concurrent removal of the ILM during vitrectomy. ILM removal ensures that the posterior hyaloid has been removed, particularly in cases of vitreoschisis.

Additionally, removal of the ILM reduces the likelihood of postvitrectomy ERM formation by inhibiting migration and reproliferation of astrocytes. The role of vitrectomy in the eyes with DME without evidence of VMT remains unclear. Few studies have been able to determine with confidence the efficacy of this intervention in these cases.

One of the challenges in interpreting these surgical studies is that many do not take into account the presence of preoperative factors, such as macular ischemia or the integrity of retinal layers, which can significantly affect visual outcomes. Recent studies have begun to look at such prognostic factors.

Several studies have already shown the preoperative and postoperative prognostic value of the OCT appearance of the external limiting membrane and ellipsoid zone.17,18 Another study suggested the utility of surgery in cases that did not have preoperative enlargement of the foveal avascular zone, indicating macular ischemia.19

Additional studies using newer technologies, such as swept-source OCT and OCT angiography, may enable identification of other imaging characteristics of the vitreomacular interface and retinal vasculature that may help better to predict which patients will benefit from surgery.

Another caveat is that many of our current surgical studies were undertaken prior to the era of anti-VEGF injections for DME. Future studies that focus on anti-VEGF nonresponders will help us determine the role of surgery in our current treatment protocols.

Plasmin and ocriplasmin (Jetrea, ThromboGenics, Iselin, NJ) are nonspecific proteases that degrade glycoproteins, leading to liquefaction of the vitreous and pharmacologic separation of the posterior vitreous from the ILM.

The diabetic vitreous undergoes nonenzymatic glycation which could alter its susceptibility to enzymatic degradation.21 Furthermore, complete PVD induction may be challenging due to the firm adherence of the posterior hyaloid to the ILM in diabetic patients.22

Published trials have not specifically analyzed use of ocriplasmin in cases of DME. However, a few older case series suggested a role for pharmacological vitreolysis in DME.23-25 A phase 2 trial is planned to assess the role of ocriplasmin in preventing progression from background retinopathy to proliferative retinopathy through PVD induction by enzymatic vitreolysis. This interesting study may help us to better understand the role of the vitreomacular interface in diabetes and possibly inform us about the pathogenesis and treatment of recalcitrant DME.

In current practice, focal laser has largely been replaced by anti-VEGF therapy for the initial treatment of DME. However, focal laser can still be useful as an adjunctive therapy for refractory non–center-involving macular edema, particularly by targeting leaking microaneuryms. Novel laser systems are allowing for computer-based treatment strategies, which have been helpful in improving accuracy of targeted focal laser treatments.26

Another laser strategy that has recently been developed is micropulse laser (MPL), which delivers energy with a series of repetitive, low-energy pulses instead of the single high-powered pulses characteristic of conventional focal laser.27 The thermal energy is selectively absorbed by the retinal pigment epithelium, sparing the neurosensory retina27 and avoiding the complications of conventional focal laser.

Morphologic and functional safety studies have found no visible retinal or choroidal lesions on clinical fundus examination and multiple imaging modalities, as well as no alterations to the integrity and reflectivity of the outer segment on OCT.28

The exact mechanism by which MPL resolves DME is still unknown. MPL has been described as “retinal photostimulation,” rather than retinal photocoagulation. It may help normalize cytokine expression and increase therapeutic recruitment of RPE cells.27, 29, 30

Micropulse protocols vary widely. The laser is generally applied in a grid pattern to the region of macular thickening, based on the OCT findings. Treatment can be applied directly over the fovea and reapplied in cases of recurrence. One of the challenges with MPL is the inability to visualize the intraoperative laser tissue reaction to direct the treatment.

Case reports and small case series have shown improvement in macular edema and VA in cases unresponsive to anti-VEGF therapy and in concert with steroid treatments. Future prospective studies may help us to better understand the role of MPL in refractory DME as a primary or adjunctive therapy.

Recalcitrant DME is a complex condition that may present with a variety of phenotypes. Effective therapy in many cases may require the application of several strategies targeting different pathological mechanisms in DME. Individualized treatment plans may be needed for some patients.

14. Stefansson E. The therapeutic effects of retinal laser treatment and vitrectomy. A theory based on oxygen and vascular physiology. Acta Ophthalmol Scand. 2001;79:435-440.