An economically viable approach is within our grasp.

Because they are chronic diseases, vision-threatening posterior-segment disorders require treatment for a prolonged and indefinite period of time, implying that the treatment offered must have three important attributes: safety, immediate efficacy, and sustenance of the beneficial effect for a prolonged period.

However, to varying extents, all three of these implants/inserts raise intraocular pressure and increase the risk of cataract. In addition, none of the approved anti-VEGF drugs is currently distributed in a sustained-release format.

Gerald J. Chader, MD,2 identified five key barriers to new treatments for drug delivery: developing an effective product, identifying and implementing the best method of delivery, using the appropriate animal model for testing the drug’s safety and efficacy, identifying an adequate patient sample for a clinical trial, and locating a company to finance the product and marketing.

Pradeep Venkatesh, MD, practices at the Dr. Rajendra Prasad Centre for Ophthalmic Sciences of the All India Institute of Medical Sciences in New Delhi. He does not report any financial interests in products mentioned here. Dr. Venkatesh can be reached via e-mail at venkyprao@yahoo.com.

However, any drug or related product would be successful in reducing the burden of blindness only when it is universally affordable. This is exemplified by the overwhelming preference of both patients and physicians to use bevacizumab (Avastin, Genentech, South San Francisco, CA) as an off-label treatment, compared to ranibizumab (Lucentis, Genentech), which has FDA approval.

The cost of a drug being marketed is based on the amount spent by the company in meticulously researching a new investigational drug and bringing it from the bench to the bedside. This amount includes the intellectual property- and patent-related expenditures.

In the development of a new molecule, only five in 10,000 finally reach the stage for clinical trials. When sustained drug delivery systems are involved, an additional cost lies in the design, development, and production of a delivery platform, which makes these devices exorbitantly priced when they are finally released onto the market. The cost is so high that only a small proportion of patients with chronic, vision-threatening disorders are able to afford these devices. Therefore, it is imperative that we look for alternative approaches that are not only as safe and efficacious but also very affordable.

One approach to making sustained drug delivery affordable and universally available is to use the small-gauge trocar–cannula approach (Figure). The advantages of this approach are the following. 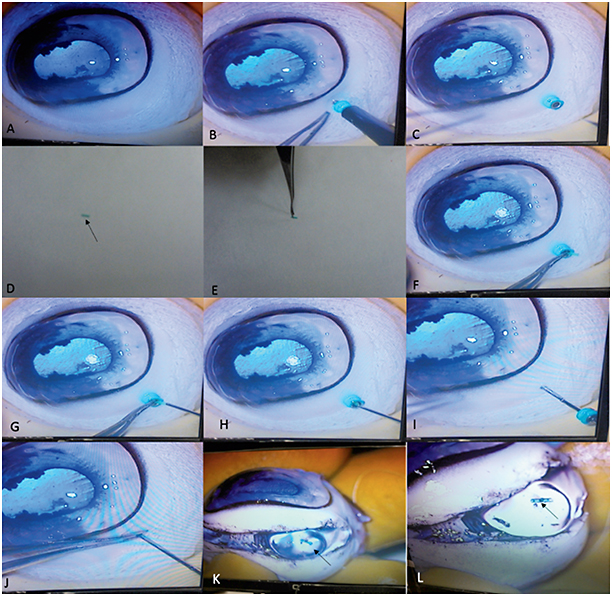 Figure. An enucleated goat eye (A) is entered with a 25-gauge trocar and cannula (B-C). Twenty-five-gauge silicone sleeve (D) was used as a dummy drug microcapsule and was transferred to the 25-gauge cannula opening using forceps (E-F). The drug microcapsule is now inserted into the vitreous cavity (G-H) using a 25-gauge instrument. The cannula is then slowly slid over the shaft of the inserter (I) before completely removing the inserter itself (J). Sliding the cannula out first, before removing the inserter, is important because it helps to maintain the drug capsule within the vitreous cavity. If the inserter is removed before removal of the cannula, there is risk of the microcapsule also being dragged out. On making a circumferential section in the globe to study the location of the microcapsule, it was found to lie within the vitreous periphery (K-L, black arrow).

1. The safety of small-gauge trocar-cannula systems is well established.

2. It is affordable, easily available, and widely practiced by retina specialists.

3. The insertion of microcapsules is more controlled, and the microcapsules tend to remain near the vitreous base, in contrast with the relatively less controlled release of the currently available implants.

4. Drug microcapsules of varying concentrations can be used.

5. Multiple “microcapsules” can be delivered at the same sitting.

6. The same approach can be used for the insertion of microcapsules containing any approved molecule, including nanomolecules and probably even encapsulated cell-based therapy.

7. Resources need not be diverted to design a new method of drug delivery but only new molecules to pack into microcapsules.

The current limitations of this approach include the need for research and development to manufacture these microcapsules and atraumatic forceps to transfer the microcapsule from the casing to the cannula.

In conclusion, the market cost of currently available sustained-release devices for the treatment of chronic posterior-segment diseases is extremely high, constituting a significant hurdle for many nations in their objective of reducing the burden of blindness from these diseases. Affordable and universally applicable alternatives must be researched, and microcapsules constitute one such approach. RP