Degenerative Myopia: A Better Option for the Treatment of Foveal Schisis

Vitrectomy with membrane dissection is a safe and effective treatment for the release of most forms of vitreomacular traction. However, in 1999, the approach was extended, by Takano and Kishi, to the treatment of a related, but fundamentally different, condition — that of myopic macular schisis.1

Some controversy still surrounds this application, because of an increased incidence of surgical complications in the weak tissues of the highly myopic eye and the limited vision improvement often achieved.2

As an alternative to vitrectomy and internal limiting membrane resection, the external application of a tensioned posterior-pole buckle has been shown to correct myopic macular schisis and detachment safely and effectively. The approach is an extension of a technique shown to be effective for the control of axial myopia progression.3,4

Intrinsic to the choice between the two available procedures is an assessment of their relative safety and effectiveness. To be truly effective, any improvement in the appearance of the postoperative optical coherence tomography should also translate into a positive visual benefit for the patient. Two very worthwhile visual benefits would be either a visual acuity improvement or a slowing of the rate of future vision loss.

Brian Ward, MD, PhD, practices with Retinal Diagnostic Center in Campbell, CA. He reports no financial interests in products mentioned here. Dr. Ward can be reached via e-mail at bwardrdc@yahoo.com.

Under general anesthesia, a shaped 70 x 9 mm strip of gamma-irradiated donor sclera is placed over the eye’s posterior pole. The manipulations used for its implantation avoid the need to remove extraocular muscles or to expose the posterior pole of the globe.

Surgical instrumentation of the eye is restricted to areas that are anterior to the globe’s equator, with the single exception of limited dissection around the insertion of the inferior oblique muscle.

The positioned strip’s ends are cut to length and secured to the recipient eye’s sclera in its superonasal and inferonasal quadrants (Figure 1). Following the strip’s placement, tension is created in it, using a pair of preplaced sutures to produce an adjustable tuck close to its superior end (Figure 2). 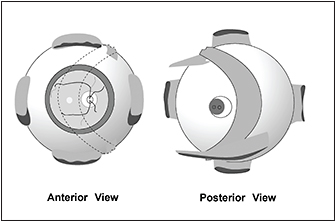 Figure 1. Illustrating the position of a posterior-pole buckle behind a right eye.
COURTESY OF NATURE PUBLISHING 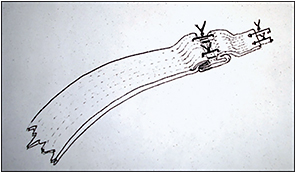 Figure 2. Tensioning the buckle by creating a tuck during the tying off of a pair of preplaced 5-0 Dacron sutures.
COURTESY OF WOLTERS KLUWER

The buckling effect may be increased by suturing a piece of sponge or donor scleral material to the underside of the strip before it is positioned over the posterior pole. This placement technique has been found to minimize trauma to the eye and was used in a large series cases.4

The preferred material for the buckling strip is gamma-irradiated donor sclera, which has been found to be superior to available man-made implant materials and fabrics for this particular purpose.

The sterile, preserved, donor material slides easily into place over the back of the eye, remaining well clear of the optic nerve. There is no need for the use of posterior fixation sutures. The tensioned strip scars to the recipient sclera, and it has not been found to lose its buckling effect in more than a decade of follow-up.

The complication rate has been very low in the ongoing series of more than 400 cases (axial lengths from 27 mm to 39 mm). There have been fewer than five cases of temporary choroidal effusion and of persistent diplopia. The eyes treated for axial myopia control have had significant macular schisis present in fewer than 15% of the cases.

Where schisis was present, additional tension was provided to the buckle. All schisis or tractional detachments have been eliminated or significantly reduced. Early macular thickening (“protoschisis”) was often visible in the preoperative OCT images, but its reversal was seen after buckling in all cases. This observation suggests that buckling for myopia control is likely to prevent the later appearance of a myopic tractional maculopathy. 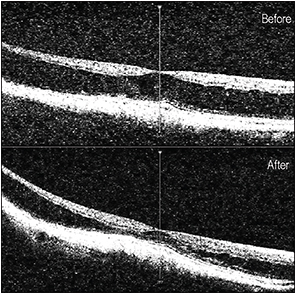 Figure 3. Pre- and postoperative OCT scans of myopic schisis at four months. At nine months the schisis was fully repaired. The initial acuity was 20/70-, and the final was 20/50-. 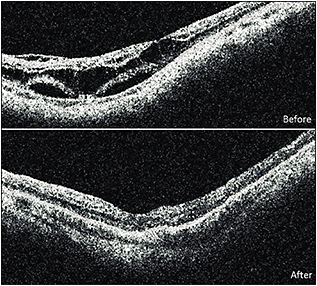 Figure 4. Pre- and postoperative OCT scans (at one week) in a case of a monocular individual with chronic schisis and detachment. The initial acuity was 20/80- and at six months it was 20/50-.

Figure 5. Pre- and postoperative OCT images of chronic macular schisis, tractional retinal detachment, and a lamellar macular break. The postoperative view is four months after the surgical intervention. Visual acuities were 20/60 preoperatively and 20/50 at four months. More settling of the detachment may still occur. 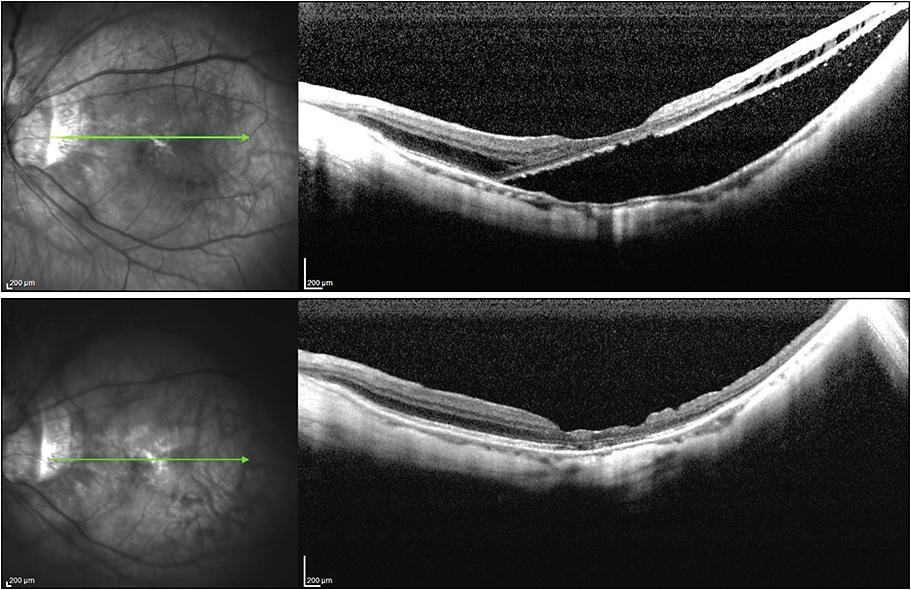 Figure 6. OCT image (top) of a case of residual detachment and schisis three years after a treatment by vitrectomy and ILM peel (visual acuity 6/400). On the bottom, the same macular region two weeks after placement of an augmented posterior-pole buckle. Nine months later, the visual acuity was 20/80.

Degenerative myopia has been ranked third to seventh among the causes of legal blindness, with higher rates in Asia and lower rates in parts of Western Europe and the United States.5

An increase in high myopia’s incidence and prevalence is now evident in parts of the US, largely due to the patterns of recent immigration. The affected individuals have genetic features that increase their risk of developing phenotypes of degenerative myopia and of passing on risk to their offspring.

In degenerative myopia, macular schisis is not an isolated condition. It is only one of the components of the progressive maculopathy. The degree of macular function loss increases with the age of the patient and with the axial length of the eye.5

Myopic macular schisis is not a product of vitreomacular traction but rather of the accumulated effects of posteriorly directed forces being applied to the choroid and retina by scleral overgrowth and stretching in childhood and adolescence, followed by further adult incremental stretching. Pedantically, and physiologically, this process should be described as being a result of scleral-choroidal-retinal traction.

Preschisis macular thickening is seen to occur as the ILM begins to reach the limit of its elasticity. The anchoring of the anterior retina, by the ILM, prevents it from moving any further posteriorly, and the tissue layers begin to separate as posterior traction continues.

Scleral stretching exerts posterior forces on the retina, which are transmitted via the mechanical linkage provided by the choroid. The role of the ILM in schisis formation is demonstrated when its surgical removal allows the separated anterior retina to move back into apposition with the posterior layers.

Thus, vitrectomy with ILM resection is able to correct myopic schisis and detachment. However, the released neurosensory retina may then be further stretched as it is dragged posteriorly. Stretching the choroid and retina causes progressive damage to their tissues and the strangulation of their blood supplies.

In contrast, posterior-pole buckling forces the sclera, the choroid, and the posterior retina forward, closing schisis cavities and detachments by a process that also reduces stretching of the tissues. The force applied to achieve this should not be equated to the passive process of “scleral reinforcement,” a group of tissue-grafting procedures that was abandoned for progressive myopia control several decades ago.

Immediate acuity improvement is uncommon in cases buckled for axial myopia control, but somewhat more common if local tractional detachment has been present. Controlling axial myopia progression is expected to benefit the patient most by minimizing future macular damage. Following posterior pole buckling, subjective vision changes have been described as “sharper,” “less distorted,” and “brighter.” Further studies of pre- and postoperative visual functioning should be pursued.

Following successful axial myopia stabilization, myopic degeneration is expected to still progress, at a rate that is appropriate for the degree of myopia present and the particular features of the eye in question. The earlier the diagnosis can be made and treatment given, the better the opportunity will be to influence the future course of vision in a positive manner (Figure 7). 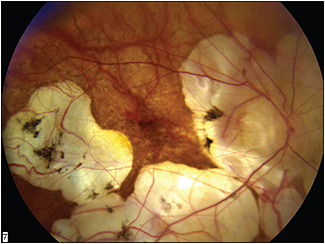 Figure 7. Buckling at a very late stage in the progression of degenerative myopia in an attempt to slow vision loss in an eye with a poor prognosis.

Posterior-pole buckling may be considered as the primary procedure for any eye that meets the following three criteria:

2. A history of ongoing progressive axial myopia; and

3. The presence of the signs of myopic macular damage, schisis, or tractional detachment.

For surgeons contemplating the adoption of posterior-pole buckling, an unfamiliar orbital procedure must be learned. In this respect, the technique joins a group of orbital procedures that are used to treat conditions affecting the eye’s posterior segment. These techniques include scleral rupture repair, plaque application for irradiation therapy, eye-wall resections for intraocular biopsy, choroidal drainage, and the trans-scleral removal of certain intraocular tumors and foreign bodies.

Other forms of buckles have retained a limited role in the closure of recurrent macular holes and the treatment of some retinal detachments. Among these procedures, posterior-pole buckling for myopia control should be one of those more frequently performed, in view of the higher incidence of the indications for its use.

Vitrectomy with membrane peel is an established treatment for the release of myopic macular traction. A simplified form of posterior-pole buckling offers a potentially safer surgical technique for schisis repair, with the significant additional benefit of controlling the progression of the axial myopia. The wider availability of this technique will permit more individuals to have access to treatment and to hope for better vision later in life. RP