Updates on telemedicine for diabetic retinopathy screening and smartphone funduscopy

Of key importance in ophthalmology is early detection. Teleophthalmology provides an easy, cost-effective way to diagnose many retinal diseases and ultimately to preserve a patient’s eyesight. In retina, there has been a trend toward teleophthalmology, particularly for diabetic retinopathy and retinopathy of prematurity (ROP) screenings, especially in areas where retinal specialists are not readily available.

Important points to consider when assessing the effectiveness of telemedicine are the quality of the images obtained and the accuracy in the interpretation of these images for the screening of retinal diseases, such as DR. The number of patients with diabetes in the United States will continue to grow, and the only way to potentially screen all of these patients for sight-threatening DR would be to utilize non-eyecare professionals through access to telemedicine.

Several studies have provided proof of the concept that telemedicine for referral-warranted DR could serve as a screening tool to identify those patients who would not otherwise be seen by an ophthalmologist or eyecare professional.

Chin et al1 conducted a retrospective review of all patients screened for DR using nonmydriatic fundus photography (nFP) between July 2006 and May 2011 and whose electronic images were reviewed by a retinal specialist remotely.

Luis J. Haddock, MD, and Allie Nadelson, MD, practice at the Bascom Palmer Eye Institute of the University of Miami Medical School in Florida. Neither author reports any financial interests in any products mentioned here. Dr. Haddock can be reached via e-mail at ljhaddock@med.miami.edu.

The patients were seen either at rural medical clinics, where they had images obtain using a Topcon (Livermore, CA) TRC-NW6S nonmydriatic fundus camera, or at an urban family practice, where they had images obtained using a Nidek (Fremont, CA) AFC-210 nonmydriatic fundus camera.1 A complete summary of the results from this study is provided in Tables 1 and 2 (page 37).


The study showed that the images were more than 80% adequate in quality deemed by a retina specialist’s interpretation, which allowed for the diagnosis of DR, as well as incidental findings of hypertensive retinopathy, pigmented lesions, and even optic nerve cupping.

Telemedicine has the potential to screen large numbers of patients with DR; thus, a recent study by Walton et al3 evaluated the use of automated computer algorithm-based interpretation of images via the Intelligent Retinal Imaging System (IRIS; Pensacola, FL) to screen patients with diabetes as an effective and cost-efficient way of evaluating large populations and identifying those with DR warranting referral.

In their study, the patients received teleretinal screening in primary care clinics using nonmydriatic fundus photography. The images were uploaded to a HIPAA-compliant, cloud-based server, where they were hosted and processed by IRIS. The IRIS-integrated grading module used a neural network that had a specific classifier defined and trained by a standard data set of images from the Early Treatment Diabetic Retinopathy Study. The uploaded images were compared with images from the standard data set, and the program searched for the highest probabilistic match.

Once identified, the patient’s image was classified into a “referral” or “observation” category, whereby any patient with sight-threatening diabetic eye disease, which included severe nonproliferative diabetic retinopathy or more advanced disease, was classified as a “referral.”

Additionally, an ophthalmologist in a reading center manually graded the level of retinopathy based on the ETDRS classification criteria for each image, and those patients who were graded as having severe NPDR or worse had a retinal examination within two weeks.

From these findings, the IRIS computer-automated algorithm was found to be an effective screening program for identifying patients with sight-threatening diabetic eye disease. This study provided proof of the concept that an automated system could screen large patient populations and identify those patients at risk of vision loss who would otherwise not be evaluated by any eye professional.

In addition to nonmydriatric and mydiatric fundus photography, today’s smartphones have cameras with resolution of 5 megapixels and higher, enabling their users to capture high-quality images. Recent studies have shown their capabilities in acquiring high-quality fundus images with and without adapters.

Smartphones have now become useful ophthalmic devices to capture both anterior- and posterior-segment images4 (Figure 1 provides an example of an anterior and posterior adapter used to capture these images). 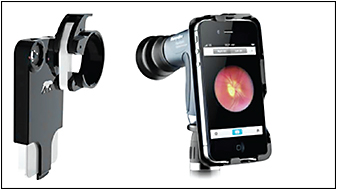 Furthermore, the option of zooming on the smartphone touch screen to visualize and enlarge images instantly is an added advantage for viewing images from the patient, as well as for reviewing the images at a remote location by a trained retina specialists.5

Figure 2 shows the Paxos posterior-segment adapter with the Volk (Mentor, OH) Digital Clear Field lens that was used to capture the macula spanning 45º and optic nerve images, and Figure 3 (page 38) shows the quality of the images captured. 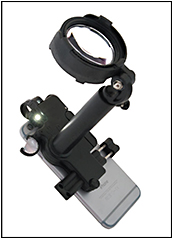 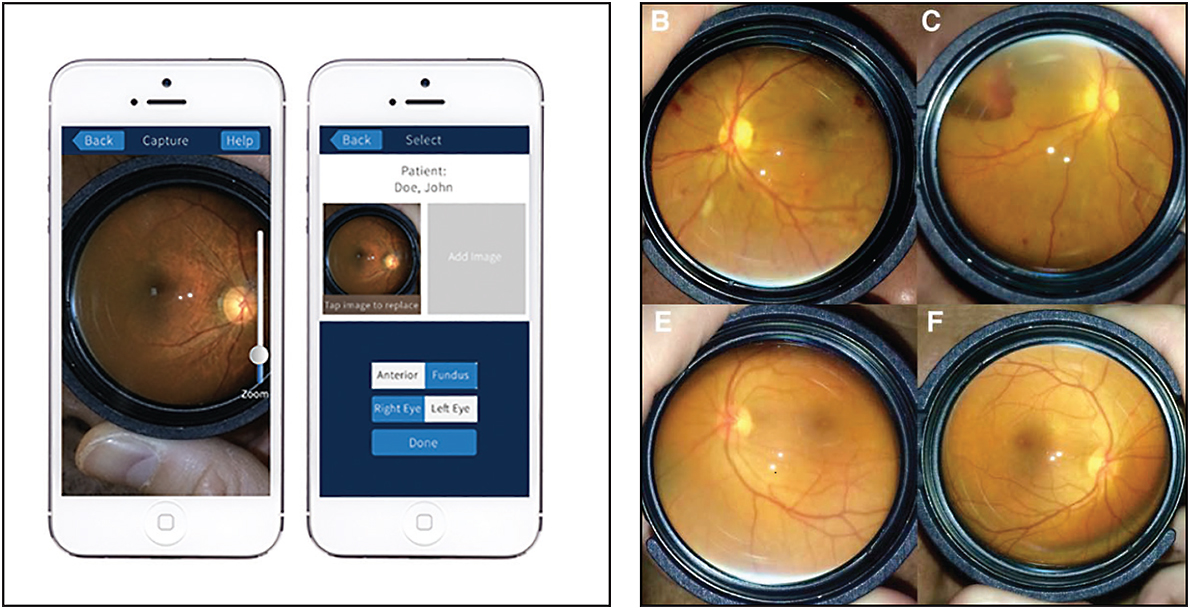 Using clinical examination grading as the reference to detect referral-warranted retinopathy, the smartphone photography grade was found to be 91% sensitive and 99% specific, with a 95% positive predictive value and a 98% negative predictive value, thus showing that the images captured and reviewed with a smartphone could provide an efficient and cost-effective way of identifying patients at risk of vision loss from DR.

The assessment of DR by a masked retina specialist using color digital images and videos obtained using the D-Eye device was in an exact agreement in 204 of the 240 eyes studied (85%), and agreement within one step was observed in 232 eyes (96.7%). Compared to biomicroscopy, the sensitivity and specificity of smartphone ophthalmoscopy for the detection of clinically significant macular edema were 81% and 98%, respectively.7

Not only has the D-Eye adapter been useful with DR screening, but it has also been used to screen and diagnose optic nerve diseases, such as glaucoma and optic nerve edema.

Teleophthalmology has already played an important role in the evaluation and screening of other retinal diseases, such as retinopathy of prematurity (ROP). The Stanford University Network for Diagnosis of Retinopathy of Prematurity (SUNDROP) is an ongoing telemedicine-based community initiative for in-hospital screening for high-risk infants for treatment-warranted ROP (TW-ROP) at six satellite neonatal intensive care units (NICUs) situated throughout Northern California.8

Based on the American Academy of Pediatrics (AAP), American Academy of Ophthalmology (AAO), and Association of Pediatric Ophthalmology and Strabismus (AAPOS) guidelines, infants were screened using RetCam II (Clarity Medical Systems, Pleasanton, CA) images, which were then sent to the Stanford University Byers Eye Institute reading center for remote interpretation by an ROP specialist.

To evaluate the diagnostic accuracy of telemedicine screening, the clinical diagnosis determined using bedside binocular ophthalmoscopy (BIO) was considered the gold standard reference, and all of the patients received at least one mandatory bedside BIO examination from a pediatric retina specialist before discharge.

The six-year results of this study confirmed that telemedicine appears to be a safe, reliable, and cost-effective way of screening and increasing access to infants with potentially sight-threatening retinopathy.

Is there a down side to teleophthalmology? We think the simple answer is no. More than 29 million people in the United States have diabetes, and there just simply are not enough eyecare professionals or retina specialists to screen every individual affected with this disease. Teleophthalmology provides a way for patients who would otherwise not have been seen by an eyecare professional to be screened and therefore diagnosed earlier and treated sooner before more permanent visual complications occur.

Medicare studies have demonstrated a cost savings of $36 to $48 per teleretinal-screened patient over unscreened patients, who are more likely to present with advanced disease and therefore require more invasive and costly treatment.7 With early detection come more referrals, better patient care, and more disease-specific referrals for the retina specialists.

In addition, the advent of smartphone funduscopy in combination with teleophthalmology may provide a platform for nonophthalmic physicians to capture images that could be remotely sent to retina specialists for review to aid in diagnosis, management, and appropriate referrals. The future is bright, but more studies will need to be performed in large-scale populations to further assess the efficacy of this technology in providing adequate screening for retinal diseases. RP