Complications of Surgery for Myopic Foveoschisis

Myopic foveoschisis (MFS) represents a potential cause of significant vision loss in highly myopic patients with a posterior staphyloma.1-5 Schisis alone may or may not significantly impair visual acuity (Figure 1); however, MFS may be associated with foveal retinal detachment, macular hole, or a combination of the two,5 as part of a spectrum of disorders that has been called myopic traction maculopathy (MTM).6 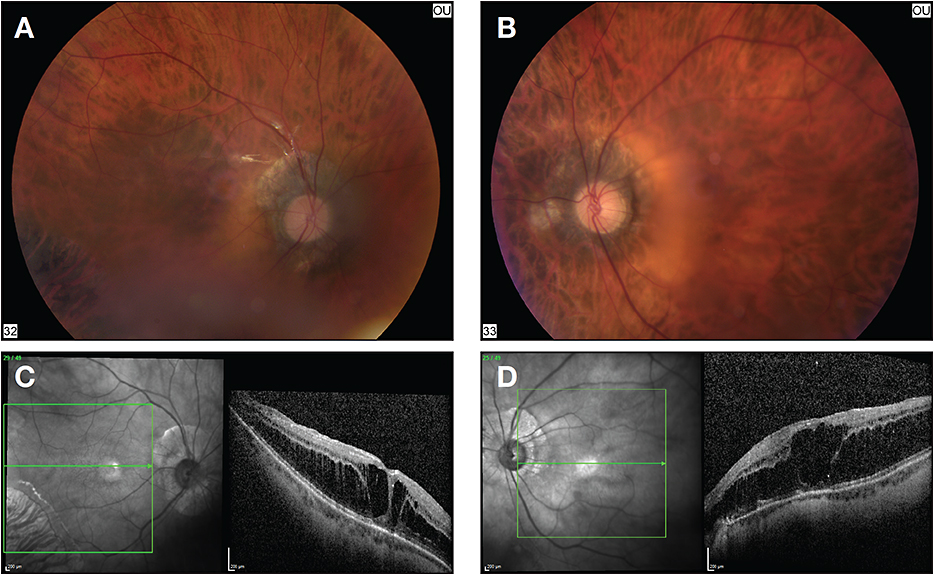 Figure 1. Color fundus photos of the right (A) and left (B) eyes and the corresponding OCT images (C and D) of a 43-year-old female patient with myopic foveoschisis. Best-corrected visual acuity was 20/40 bilaterally.
COURESTY OF HASSAN RAHMAN, MD

MTM has been postulated to be secondary to numerous factors, including vitreomacular traction, tangential traction from epiretinal membrane or from vitreous cortex remnants following posterior vitreous detachment, or relative stiffness of the internal limiting membrane overlying the staphyloma.7-9

Eyes initially presenting with MFS may progress to requiring surgery in 28.5% to 50% of cases,2 with the most common indications for surgery being progressive macular thickening with resultant visual decline or visual decline associated with the aforementioned macular hole or foveal retinal detachment.2,3,10,11

Surgical treatment has been found to be beneficial in many cases of MFS, particularly those cases accompanied by foveal retinal detachment,12 although the indications for surgical intervention and the specific procedure of choice are controversial.

Alan Hromas, MD, is a second-year vitreoretinal surgery fellow at Retina and Vitreous of Texas in Houston. Johnny Tang, MD, practices with Eye Health Vision Centers in New England. Neither author has financial interests to disclose related to topics mentioned in this article. Dr. Hromas can be reached via e-mail at alan.hromas.md@gmail.com.

In general, surgical strategies involve decreasing or countering the tractional factors previously noted. The presence of the posterior staphyloma and the frequent coprevalance of myopic degeneration, retinal pigment epithelial atrophy, and choroidal neovascularization may limit the expected postoperative best corrected visual acuity13 and the chance of anatomical surgical success.14

Potential complications of surgical repair include those inherent to scleral buckling or vitrectomy in general, in addition to those complications that are significantly more common in patients with MTM. Herein, we discuss these potential shared and unique complications.

Macular scleral buckling was frequently used prior to the introduction of PPV, and it can still be used successfully, either as a primary procedure6,15 or in conjunction with PPV.20

Some authors still consider macular scleral buckling to be the initial procedure of choice in these cases; it can also be used as a secondary procedure following failed vitrectomy.6 The procedure is regarded as technically challenging by some, with a great deal of reported variation in surgical technique.18

While a detailed discussion of any specific surgical technique is beyond the scope of this article, the macular buckling procedure generally involves creating an indentation within the posterior staphyloma, using a specially designed plomb and thus “correcting” the anatomical abnormality, which is chiefly responsible for the pathologic tractional findings.

While surgeons and centers experienced in the macular buckling procedure may find a great deal of success, their results may not be reproducible in less-experienced hands, especially in an era when even primary scleral buckling for retinal detachment repair is becoming less frequent in favor of primary vitrectomy.

Currently, the transvitreal approach of PPV is more commonly employed as a treatment for the MTM spectrum as compared to buckling. As in macular scleral buckling, there is a great deal of variation in reported technique and surgical procedure. Generally, a core vitrectomy is performed, and a posterior vitreous detachment is induced when not already present.

Various authors have advocated peeling of any residual preretinal vitreous cortex or ERM, followed by peeling of the ILM.12,14,19,21 Surgeons may then choose to use no internal tamponade or tamponade with air,22 gas, or silicone oil.23

There are generally accepted complications inherent to PPV regardless of the surgical indication: PPV for macular pathology, in general, entails a well-documented risk of iatrogenic retinal breaks,24-27 retinal detachment, and worsening of pre-existing nuclear sclerotic cataract.28

Anteroposterior traction by an adherent posterior hyaloid is believed to be a significant causative factor in MTM pathogenesis, and the induction of a PVD is an important step in all MTM vitrectomy cases. It is therefore notable that surgical induction of a PVD is associated with an even further increase in the risk of retinal tears,26,27 as well as a risk of iatrogenic postoperative full-thickness macular hole.

In addition to the induction of a PVD, treatment for all forms of MTM generally involves removal of premacular structures, including any residual posterior vitreous cortex (PVC) and ERM. Although histologically distinct, both structures are believed to exert oblique or tangential traction on the perifoveal macula, possibly decreasing retinal compliance over the posterior staphyloma and favoring the development of foveal retinal detachment, macular hole, or both.

Removal involves forceps peeling, often with use of visualization aids; triamcinolone acetonide is commonly used to aid in the visualization of residual PVC, while trypan blue is often used to delineate ERM.29

The most notable potential complication of the removal of premacular structures is probably inadvertent mechanical damage to the retina during forceps peeling, a risk that is present in any vitrectomy surgery involving forceps peeling of preretinal structures but that is perhaps more likely in highly myopic eyes. Additionally, the visualization aids used to accomplish removal each carry their own risks.

Triamcinolone particles adhere to residual vitreous or PVC and thus enhance the visualization of these structures. Use of triamcinolone appears to reduce the risk of intraoperative retinal breaks and is generally regarded as safe, although it can be associated with a transient IOP elevation following use.30

It is notable that, while perhaps commonly used intraocularly, the commercial triamcinolone preparation Kenalog-40 (Bristol-Myers Squibb, New York, NY) contains the possibly toxic preservative 0.99% benzyl alcohol, and the product is not approved for intraocular use.31 A preservative-free triamcinolone preparation is commercially available (Triesence, Alcon, Fort Worth, TX).

Trypan blue is also generally regarded as having a low risk of toxicity to the neurosensory retina, although accidental subretinal injection has been reported.32 Subretinal trypan blue may result in RPE atrophy, secondary to either a toxic effect of the dye itself or the force with which it was injected.

Ensuring that the trypan blue injection cannula is not aimed directly at the macula reduces the chance of causing subretinal injection within the macula, resulting in parafoveal patches of macular RPE atrophy.

ILM peeling has been repeatedly suggested to increase the odds of successful surgery in all stages of MTM.21,33-38 In addition to ensuring that all residual hyaloid and ERM are removed, ILM removal is believed to increase retinal compliance and presumably to allow the retina to better conform to the posterior staphyloma.

Peeling of the ILM in highly myopic eyes may be more technically challenging than in otherwise normal eyes, and it has been suggested that an adequate peel area in MTM cases may be necessarily more extensive: myopic patients may benefit from peeling the ILM over the entire retina overlying the staphyloma, as opposed to peeling the immediate perifoveal area only, as is often performed in surgery for idiopathic macular hole. Peeling a larger area may, in turn, increase the risk of mechanical damage to the retina via repeated grasping of the ILM.28

Various vital stains have been used to enhance visualization of the ILM, with indocyanine green and brilliant blue G most commonly used.14,39,40 Both dyes have been shown to be effective, and they appear to increase the chance of successful ILM removal, although the use of either is not without risk.

ICG has a well-documented risk of toxicity to the RPE, and it has been described as producing irreversible RPE atrophy with corresponding vision loss; this risk may be greater in highly myopic patients with chorioretinal atrophy or pre-existing attenuation of the RPE.29,41-43 In comparison, there appear to be fewer toxicity concerns with brilliant blue G, although numerous case reports have been published. Accidental subretinal injection of both agents has been reported.29,44

Various authors have utilized internal tamponade in surgery for the MTM spectrum. Air, sulfur hexafluoride (SF6), perfluoropropane (C3F8), and silicone oil have all been used with some degree of success in patients with MFS, foveal detachment, and macular hole.2,8,18,22

While it is generally agreed that internal tamponade increases the odds of successful repair in macular hole cases, multiple authors have suggested that tamponade is unnecessary when no full-thickness hole or retinal defect is present.19,45

The primary risk involved with intraocular tamponade is postoperative IOP elevation, which may be related to an intentionally or unintentionally expansile concentration of gas or an overfill of gas or silicone oil. In most cases, the IOP elevation can be managed medically.46

Macular hole may occur in highly myopic eyes with MTM without iatrogenic provocation or as a complication of surgery for MFS. Postoperative macular hole is a recognized complication of PPV for MFS, with an incidence ranging from 19% to 27%,17,47 which is significantly higher than an estimated rate of 1% following vitrectomy for retinal detachment.48

Repair requires reoperation with either macular scleral buckling or repeat PPV, wider peeling of residual ILM,50 gas tamponade, and possibly postoperative face-down positioning. Even with a surgical repair free of complications, the rate of successful macular hole closure and repair of the associated retinal detachment via vitrectomy has remained limited at 46% to 75%.36

The surgical management of MTM remains controversial despite advances in vitreoretinal surgery, with many advocates for both buckling and vitrectomy approaches. Given the lack of consensus regarding the procedure of choice for this disease spectrum, perhaps the most important step in management is to provide patients with adequate preoperative informed consent.

The relatively high incidence of new, iatrogenic postoperative macular holes in this patient group is especially concerning, given that repair may require a second or third surgical procedure and additional uncomfortable face-down positioning.

Explaining this complication only after the fact may serve to undermine patient confidence in the surgical team. Ensuring that patients understand the risk of this frustrating situation, as well as the risk of other possible complications, beforehand will help to maintain patient trust should additional intervention eventually become necessary. RP