Benjamin Franklin once wrote, “an ounce of prevention is worth a pound of cure.”1 Although he was referring to fire prevention, this adage also applies to radiation maculopathy.

Over the years, I have relentlessly sought ways to decrease therapeutic radiation to the fovea and optic nerve. For example, in the 1980s, I studied adding intraocular microwave hyperthermia to lowered doses of plaque radiation therapy for the treatment of choroidal melanoma.2

In 1990, I published on the use of radio-opaque vitreous substitutes to act as an internal shield during plaque radiation therapy.3 This strategy is being pursued today with silicone oil.4

However, it was not until the mid-1990s that I discovered a simple, low-risk opportunity to improve plaque radiation therapy.5-7 Compared to iodine-125, the use of lower-energy palladium-103 photons shifted the intraocular dose distribution.8 It increased the dose within the tumor, while decreasing irradiation of most normal ocular structures.9

Since then, the dosimetric advantages of palladium-103 have been demonstrated in many published studies and affirmed in guideline publications from the American Association of Physicists in Medicine and the American Brachytherapy Society.10-15

With more than 20 years of clinical experience, palladium-103 plaque therapy has offered superior local tumor control and among the lowest rates of metastatic disease (linked results).7,16,17 The palladium-103-related decreased dose to the fovea and optic nerve has offered a simple method to prevent or delay radiation maculopathy and optic neuropathy.

Paul T. Finger, MD, FACS, is director of The New York Eye Cancer Center, New York, NY. Dr. Finger was awarded US Patent #7553486, entitled, “Anti-VEGF Treatment for Radiation Induced Vasculopathy,” on June 30, 2009. He would like to acknowledge the assistance of his associates at The New York Eye Cancer Center: Drs. Kimberly Chin, Ekaterina Semenova, and Nadia Sachinski. He can reached via e-mail at pfinger@eyecancer.com.

Figure 1. Kaplan-Meier graph demonstrates the cumulative incidence of radiation maculopathy as a function of tumor location: anterior, posterior, and equatorial.
COURTESY OF ELSEVIER

However, not all radiation maculopathy is preventable. The fovea dose depends on the size of the tumor, its intraocular location, and the radiation source (palladium-103, iodine-125, ruthenium-106, strontium-90, and proton beam). Each source and method of ophthalmic radiation therapy offer unique intraocular dose distributions and thus equally unique patterns of side effects.11,22

Before 2005, there was no effective treatment for radiation maculopathy. Prior to the advent of anti-VEGF therapy, virtually all published studies of radiation for choroidal melanoma found that the resulting vision at three to five years was typically 20/200 or worse.6

This outcome should not be surprising. Macular radiation vasculopathy evolves from vascular incompetence (macular edema, hemorrhage, and cotton-wool spots) to an obliterative endarteritis (ischemia) with secondary neovascularization, vitreous hemorrhage, and preretinal fibrosis.23

To this day some eye cancer specialists question the treatment of radiation maculopathy because it “burns itself out” or is “self-limited.” However, one look at the history of medicine demonstrates that untreated diseases (diabetes, hypertension) also exhibited a fulminant course, leaving significant morbidity in their wake. It was not until the discovery of insulin that the natural course of diabetes was suppressed, allowing patients to lead longer and more normal lives.24

Prior to anti-VEGF therapy, I would use laser to destroy the extrafoveal areas of diseased “ischemic” retina. Panretinal photocoagulation laser either prevented or slowed the progression of radiation retinopathy. When this strategy prevented radiation foveopathy, retinal neovascularization, and glaucoma, the patients typically maintained useful vision.

However, in 2005, I published the first evidence that laser demarcation of the posterior 180º around the tumor was effective for preventing or delaying radiation maculopathy (Figure 2, page 49).25 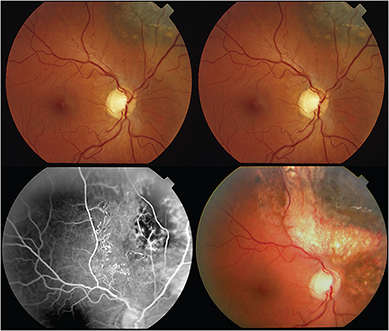 This type of laser typically extinguished fluorescein evidence of intrinsic tumor circulation. In retrospect, demarcation laser likely decreased the tumor and peripheral retinal ischemia associated with VEGF production. The efficacy of demarcation laser was confirmed by Materin et al.26 I currently use early (six to 12 months after plaque therapy) laser demarcation in an effort to avoid intravitreal anti-VEGF injections.

There exists worldwide evidence that suppression of radiation maculopathy can be achieved with periodic intravitreal anti-VEGF therapy.27-38 However, increasing anti-VEGF doses are typically required over time.29 This goal has been accomplished by shortening time intervals between injections or increasing the dose (in milligrams) per injection.

Since my original paper, clinical research has demonstrated reductions in radiation-induced macular edema, retinal hemorrhages, and cotton-wool spots and relative preservation of vision.

A scientific report on our 10-year experience using anti-VEGF therapy for radiation maculopathy will soon be available in the European Journal of Ophthalmology.37

Which Anti-VEGF Agent Is Best?

When Should We Start Anti-VEGF Therapy?

Not all patients will develop radiation maculopathy, so we must select those who need close serial observation, early intervention, or prophylactic treatment. As physicians, we are in the business of risk mitigation. Therefore, we must balance the relative risks of intravitreal injection and ocular and systemic drug-induced side effects vs radiation-induced (typically monocular) vision loss.

At the New York Eye Cancer Center, we divide our patients into three risk groups. While this grouping is clinically based (by tumor size and location), we also rely on the preoperative calculation of radiation dose to the fovea.

For eyes at high risk (>50 Gy) or those that are certain to develop radiation maculopathy (tumors within 2 mm, touching or beneath the fovea), I discuss the relative risks and potential benefits of delayed vs immediate treatment.

When Should We Stop Anti-VEGF Therapy?

Anti-VEGF therapy suppresses and thus prolongs the evolution of radiation maculopathy. I have found that almost all patients who significantly delay or stop anti-VEGF treatment develop “off-treatment” recurrent macular edema. Although these cases respond (a second time) after restarting anti-VEGF therapy, measurable damage has typically occurred in the interim.

These cases have cemented my conviction that anti-VEGF treatment works, but it merely suppresses radiation vasculopathy. The more consistent we are with treatment, the more likely it is that vision will be preserved. The bottom line is that we do not stop therapy until there is no useful vision.

What Anti-VEGF Dose Is Best?

Finally, we have used up to 3.0 mg/0.12 mL bevacizumab when lower doses have failed.37 The only current way to increase anti-VEGF dose is to shorten the time between intravitreal injections or to increase drug volume. Additionally, self-sealing “angled” injections allow for more drug (the prescribed amount) to be retained within the eye.39

As a general rule, we should use the lowest dose and longest time interval that best restore the normal “optical coherence tomography” anatomy of the macula and that preserve visual acuity.

At the New York Eye Cancer Center, we perform pretreatment mathematical modeling to compare the intraocular dose distribution of iodine-125 vs palladium-103 plaque therapy for each patient.9,10 In general, source selection (for an equivalent tumor dose) focuses on which isotope will relatively spare the macula and/or optic nerve.

In general, if both sources produce doses that are suprathreshold for radiation maculopathy or optic neuropathy, we will use the source that offers the lowest organ dose (as measured at the opposite eye wall). Using these parameters, most plaque patients have been found to be better off being treated with the palladium-103 radionuclide.9,40

In the treatment of primary orbital and metastatic tumors to the eye and orbit, most patients are treated with 6-MV photons using an external beam linear accelerator. Here, we discuss our concerns with the treating radiation oncologist. Strategies to decrease radiation maculopathy include limiting daily dose fractions to 180-200 cGy, macula-sparing radiation fields, and the use of the lowest possible therapeutic dose.40

For select posterior choroidal melanomas that are at high risk for radiation maculopathy, I continue to prefer laser demarcation to suppress the ischemic drive likely contributing to elevated intraocular VEGF.25 Demarcation argon laser can be delivered in one or two sessions and may avoid or delay the need for periodic intravitreal injections.

However, in cases in which laser does not work or is not possible (eg, when the tumor is too near or beneath the fovea), anti-VEGF therapy will offer the patient the best chance for vision preservation.

Anti-VEGF drugs can be used for radiation maculopathy related to the treatment of ocular lymphoma, uveal metastasis, and cancers of the lacrimal gland, sinus, and ocular adnexa.30

Regardless of the source, our current strategy is initial monthly dosing to determine the degree of the clinical response (normalization of macular thickness with slow resolution of intraretinal hemorrhages and cotton wool spots). Then, we titrate the number of injections, week intervals, and drug dose needed to stabilize patients over time. Since 2005, there have been only two cases in which we have been able to completely discontinue maintenance anti-VEGF dosing without significant loss of vision.

Over time, we have found recalcitrant cases. We suspect that the level of VEGF may be too high for standard doses of intravitreal anti-VEGF agents. These patients benefit from 2.0, 2.5, and even 3.0 mg of monthly bevacizumab. However, the physician should be aware that high-dose therapy requires increased drug volume, leading to transient postinjection vision loss. 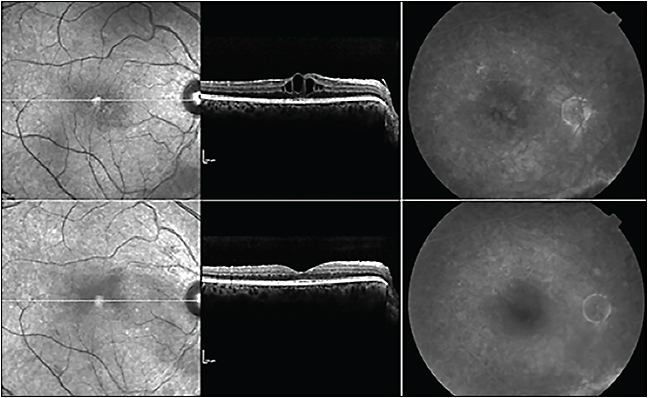 Ophthalmic radiation therapy continues to save the lives, vision, and eyes of cancer patients. However, we should all strive to decrease irradiation of the macular retina because prevention is the best way to “treat” radiation maculopathy.

We must also recognize that, despite our best efforts, cases of radiation maculopathy are inevitable. Eyes with tumors posterior to the equator or in the macula and large tumors are at the greatest risk.

Fortunately, we have found that demarcation laser and anti-VEGF therapy can suppress radiation maculopathy.. However, anti-VEGF dose escalation strategies may need to be employed to allow for vision preservation.37

Like so many other diseases (diabetes, hypertension, heart disease, and arthritis) radiation maculopathy can be pharmacologically suppressed and transformed into a manageable event. RP