Management of Macular Edema in RVO

Several modalities of treatment are available, but knowing the right combination is helpful.

Retinal vein occlusion remains the second most common cause of vision loss from retinal vascular disease, second to diabetic retinopathy.1 Both branch RVO and central RVO are often managed with the same strategies geared toward restoring vision loss and preventing future complications related to an acute event. Interventions often parallel those utilized for DR. Early management appears to provide the best outcomes, although not all patients require intervention.

Here, we review the latest treatment strategies for RVO, including the appropriate work-up, the use of combination therapies in select cases, and the integration of several modalities of care, including topical drops, intravitreal injections, laser, and even vitrectomy to achieve the best possible outcomes.

Patients presenting with an acute RVO often have associated cardiovascular disease. In patients older than 65 years old, the leading risk factors are hypertension, tobacco use, diabetes mellitus, and hypercholesterolemia.2

In those younger than 65 without hypertension, there is a significant risk of hematological disorders, such as factor V Leiden mutation or activated protein C (APC) resistance, protein S and antithrombin III deficiencies, and antiphospholipid syndrome.3-4 Elevated levels of homocysteine may also be present (Figure 1, next page).5 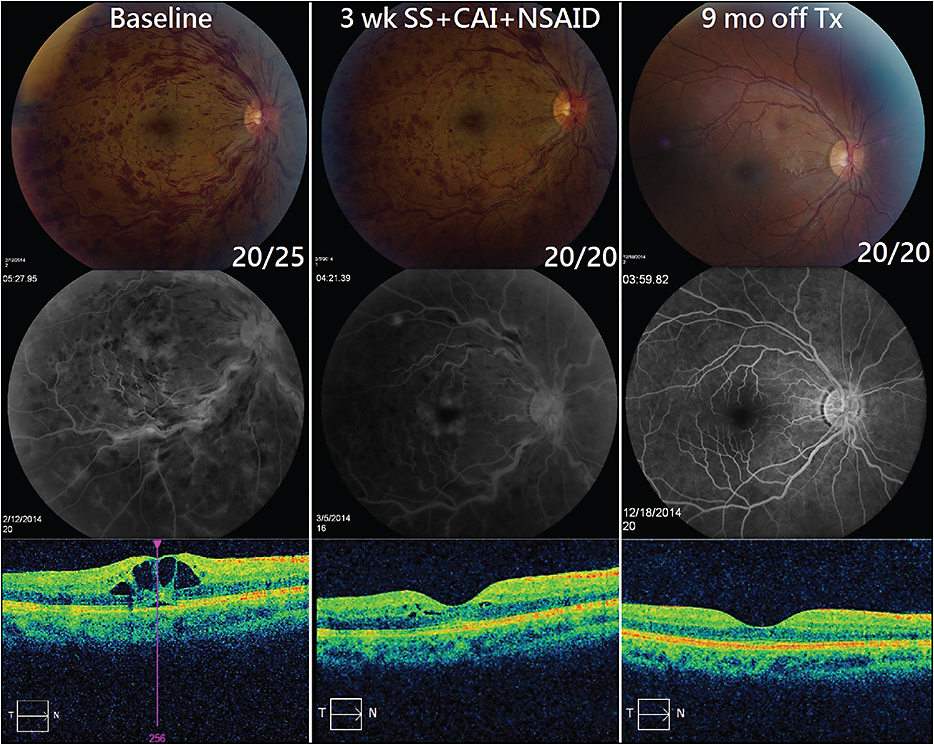 Figure 1. A 32-year-old man developed nonischemic CRVO OD. Baseline with severe cystoid macular edema seen on angiographic and OCT studies (left). He was started on a strong steroid, difluprednate, a topical NSAID, and a combination carbonic anhydrase inhibitor and alpha-2 adrenergic receptor agonist. Three weeks later (center), treatment resulted in reduction in macular edema, and VA improved to 20/20. Appropriate work-up was undertaken, and the patient was found to have high levels of homocysteine. He was started on folic acid for systemic treatment, and the topical agents were eventually discontinued. At his nine-month follow-up (right), imaging showed no recurrence of macular edema, and his VA was maintained at 20/20.

Don Pham, BS, Jea Yu, BS, and Chuck Nguyen, BS, are research associates at the Retina Macula Institute and Research Center in Torrance, CA. Ron P. Gallemore, MD, PhD, practices at the Retina Macula Institute. He reports minimal financial interest in Genentech. The other authors report no financial interests in products mentioned in this article. Dr. Gallemore can be reached via e-mail at rongallemoremd@gmail.com.

Other risk factors for RVO include open- and closed-angle glaucoma. Gonioscopy is performed to grade the angle and to look for iris neovascularization. Examination with fluorescein angiography should be included as part of the work-up of all patients with RVO.

These studies can reveal retinal neovascularization, ischemia, and macular edema that might not be visible on clinical exam or optical coherence tomography. OCT studies are utilized to confirm macular edema, quantify its magnitude, and monitor response to treatment.

Electrophysiology studies may be useful clinically and in patient care. Full-field electroretinography (ERG) testing can help differentiate between ischemic and nonischemic CRVO, with sensitivity of up to 80-90% and specificity of 70-80%.6 With marked suppression, more frequent follow-up is advised.

There is a correlation between reduced multifocal ERG amplitudes and increasing central retinal thickness on OCT studies, which may prompt more aggressive treatment.7 We utilized multifocal ERG to assess response to treatment in one clinical trial and observed a shorter implicit time following anti-VEGF therapy — a sign of improved retinal function.8

TO TREAT OR NOT TO TREAT?

Not all patients with RVO require treatment. It can be difficult, if not impossible, however, to ascertain those patients who will do well with observation alone. In the case of CRVO, we know that one-third of patients improve spontaneously, one-third stay the same, and one-third get worse. Unfortunately, ischemic conversion can occur while waiting for spontaneous improvement, in which case vision loss may be irreversible.

In contrast, with treatment, most patients with nonischemic RVO and macular edema have an excellent response to anti-VEGF agents or steroids, as discussed below. However, they may be stuck with continued treatment for an indefinite period of time. For patients with BRVO, up to 13% have spontaneous resolution of nonischemic edema.9

When associated uncontrolled hypertension is identified at the time of diagnosis, improved blood pressure control alone may be an adequate intervention. Patients should monitor their vision with an Amsler grid and near card daily and report any changes promptly. A recheck in weeks to months may be indicated, depending on the amount of fresh-appearing hemorrhages on clinical exam and the presence of any macular edema on the OCT.

In the case of CRVO, studies have shown a 60% rate of >15 letters of vision gained for both bevacizumab and aflibercept.10 For BRVO, a >15-letter improvement rate has been reported for bevacizumab and ranibizumab.11

Extrapolating from data for diabetic macular edema, aflibercept may be more effective in more advanced cases. The Diabetic Retinopathy Clinical Research Network reported the relative efficacies for these anti-VEGF agents in treating DME. Patients with baseline visual acuity of 20/50 or worse had a one-year mean score improvement of 18.9 letters with aflibercept, 14.2 with ranibizumab, and 11.8 with bevacizumab.12

Unlike bevacizumab and ranibizumab, which block VEGF-A alone, aflibercept inhibits VEGF-A, as well as VEGF-B and placental growth factor, all of which appear to play roles in the pathophysiology of vision loss associated with RVO.13-14 For recalcitrant cases of RVO treated with VEGF-A blockade alone, the addition of aflibercept may allow for the rescue of vision and restoration of a more normal retinal architecture (Figure 2). Another alternative in recalcitrant cases is the addition of steroids (see below).

Anti-VEGF injections are often administered monthly until the edema resolves, and then a treat-and-extend protocol is adopted until the injections are tapered off or recurrent edema develops.15 We extend treatment by two-week intervals up until three months and then discontinue therapy thereafter, unless there is recurrent edema, at which point we resume monthly injections until the edema resolves. This strategy is a bit different than the classic treat-and-extend protocol for exudative macular degeneration, in which we reduce the interval by two weeks or so rather than going right back to monthly injections.

Noma and colleagues reported that vitreous levels of VEGF and interleukin-6 in ischemic CRVO patients were much higher than any other retinal disorder studies to date.16 Hence, more aggressive and shorter intervals may be required, especially for CRVO vs other causes of macular edema. In select cases, two-week intervals may be initially required to effectively manage edema and reduce the risk of rebound edema from tachyphylaxis.

Steroid administration is also effective in the management of vision loss from macular edema associated with RVO. The sustained-release dexamethasone implant (Ozurdex, Allergan, Irvine, CA) has been shown in randomized clinical trials to restore vision in patients with RVO. Thirty percent of patients achieved a best-corrected visual acuity of 15 letters or greater from baseline by day 60 of treatment.17

However, anti-VEGF therapy is the preferred first-line treatment, given the favorable safety profile. Steroids can often lead to increases in IOP and formation or progression of cataracts in phakic patients.18

We use the dexamethasone implant for rescue therapy in cases of anti-VEGF failure,19 although it can be used as primary therapy in those patients in which anti-VEGF is contraindicated (eg, pregnancy, recent cardiovascular event). We also use it in previously vitrectomized eyes as sole treatment or in combination with anti-VEGF drugs, which have a shorter duration of action following surgery.

Intravitreal triamcinolone acetonide has also been utilized for RVO, and it is just as effective as the dexamethasone implant and anti-VEGF agents.20 There are many formulations of triamcinolone, including preservative-containing (Kenalog, Bristol-Myers Squibb, New York, NY) and preservative-free (Triesence, Alcon, Fort Worth, TX). We prefer preservative-free triamcinolone because it is has an on-label indication for macular edema and is prepared without compounding.

In aphakic or pseudophakic eyes with a sutured intraocular lens or anterior-chamber IOL, intravitreal triamcinolone is preferable to the dexamethasone implant because the former may dislodge into the anterior chamber and cause corneal decompensation.21

In the SCORE series of studies, intravitreal triamcinolone in 1-mg and 4-mg doses achieved a greater primary outcome than the observation group for the management of macular edema secondary to CRVO. However, the 1-mg group had a superior safety profile to 4-mg intravitreal triamcinolone, with 35% of the latter group requiring intraocular pressure–lowering medication through 12 months, compared to only 20% in the former group.18

We have also used topical therapy for the management of mild cases of RVO. The strong topical steroid difluprednate (Durezol, Alcon) has been used in loading doses to treat macular edema. Nonsteroid anti-inflammatory agents have been included in the management of such cases.

To prevent long-term glaucoma complications, many of these patients are also started on a carbonic anhydrase inhibitor and alpha-2 adrenergic receptor agonist (ie, brimonidine) and eventually tapered off the steroid over the course of weeks to prevent this steroid response (Figure 3). This combination of drops has been previously reported.22-23 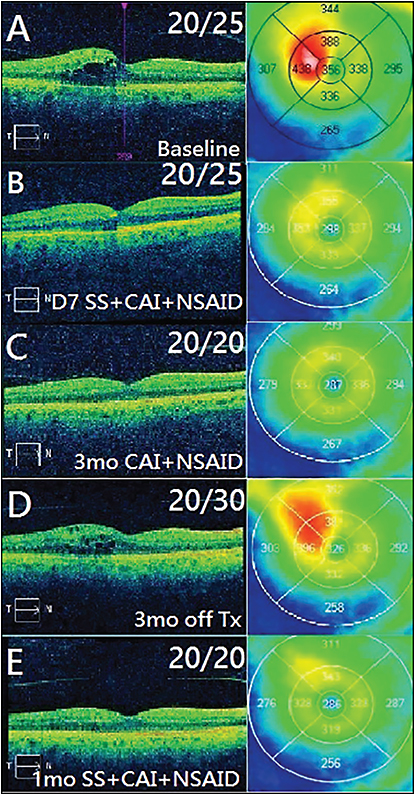 Laser has been shown to reduce vision loss in RVO. In the Branch Retinal Vein Occlusion Study (BVOS), patients with 20/40 vision or worse with macular edema for three months or longer gained an average of 1.33 lines of vision with grid laser photocoagulation.24

Macular grid laser was not beneficial for visual improvement overall, although patients younger than 65 did show some benefit. For both BRVO and CRVO, the visual benefits of grid laser for macular edema are much less than those observed with anti-VEGF or steroid implant therapy.

Therefore, laser is reserved for patients with residual chronic edema nonresponsive to other modalities or for when other modalities are no longer an option (eg, anti-VEGF contraindicated with recent cardiovascular event within four months or less; steroid responder).

Vitrectomy is indicated for acute cases of RVO when retinal detachment is present. Select patients with macular hole and chronic vitreous hemorrhage may also benefit. Progressive epiretinal membrane can lead to a limited response to anti-VEGF and laser therapy. Vitrectomy is often indicated in these cases due to recalcitrant macular edema. Following vitrectomy, the duration of effect of anti-VEGF agents may be reduced, so increasing the frequency of injections may be required.

Decompressive surgery is out of favor and rarely performed. Every few years, we will encounter a patient with an obvious obstruction in whom other therapies are contraindicated, and decompression will sometimes be considered.

Aflibercept, bevacizumab, and ranibizumab are now approved for the treatment of macular edema following both BRVO and CRVO. The primary ICD-10-CM code should be H35.81 for retina edema with a coupled secondary code for BRVO (H34.83x) or CRVO (H34.81x). The fifth digit may be 1 (right eye), 2 (left eye), or 3 (bilateral). With ICD-10-CM, it is important to include an associated systemic disorder as a third diagnosis.29

In summary, anti-VEGF treatment remains the mainstay of RVO management. Aflibercept may be the most effective of these agents, particularly in recalcitrant cases. The dexamethasone implant may be the preferred choice of treatment in select cases due to its longer duration of action, but limitations include steroid-induced glaucoma and cataract formation. The implant and other steroid delivery options are also useful in recalcitrant cases and when anti-VEGF injections are contraindicated.

Laser treatment, once a primary treatment, has become an adjunctive therapy and may reduce dependence upon injections in some patients. The most aggressive intervention, vitrectomy surgery, is indicated for vision-threatening retinal detachments, associated ERMs, and nonclearing vitreous hemorrhages. RP

11. Narayanan R, Pachal B, Das T, et al. A randomised, double-masked, controlled study of the efficacy and safety of intravitreal bevacizumab versus ranibizumab in the treatment of macular oedema due to branch retinal vein occlusion: MARVEL Report No. 1. Br J Ophthalmol. 2015;99:954-959.