Ultrawidefield Fluorescein Angiography in the Diagnosis of Diabetic Retinopathy

Diabetic retinopathy is the leading cause of new-onset vision loss among working-age adults in the United States, and its prevalence among Americans aged 40 years old and older is predicted to triple by 2050.1

Ultrawidefield (UWF) imaging has led to advances in detection and treatment that can minimize morbidities associated with this disease. In particular, UWF fluorescein angiography is integral to the management of DR, because it makes it possible to capture the presence, activity, and extent of disease beyond what is observable through clinical examination or traditional imaging alone. As our ability to image the retinal periphery improves, we are able to tailor our treatment in ways never before possible.

STANDARD FIELDS AND BEYOND

The standard of care for screening and grading diabetic eye disease was established by prospective large clinical trials, such as the Diabetic Retinopathy Study (DRS) and the Early Treatment of Diabetic Retinopathy Study.2,3 The traditional ETDRS color fundus photographs capture 30º retinal fields after pupil dilation in seven standard fields. Each exposure requires technical skill by the photographer and a cooperative patient to redirect his or her gaze as instructed.

These standard fields, when montaged together, cover approximately 100º of the retina, which is around 30% of the entire retinal surface. These montage techniques pose particular challenges for FA because different parts of the retina cannot be imaged together during the same transit time of the fluorescein dye.

Irene Rusu, MD, and Szilárd Kiss, MD, serve on the faculty, and Ariana M. Levin, BA, is a medical student at the Weill Cornell Medical Center in New York. Dr. Kiss serves as a consultant for Optos and has received research equipment from Optos and Heidelberg, both manufacturers of equipment used for UWF imaging. The other authors report no financial interests in any of the products mentioned in this article. Dr. Kiss can be reached via e-mail at szk700i@med.cornell.edu.

Wide-angle angiography aided by contact lenses (such as the Staurenghi lens) expanded the traditional 30º field of view to 150-160º; these lenses were more technically challenging for both the photographer and the patient than the traditional fundus cameras.4

The Optos Optomap Panoramic 200A imaging system (Marlborough, MA) further widened the viewing field to more than 200º in a single unsteered image.5 In 2004, UWF FA was first described on the Optos device. UWF FA allows for visualization of many different retinal areas simultaneously during angiography, and it reduces the amount of patient cooperation and technical skill required to capture these images.6

More recently, an UWF noncontact lens able to perform widefield FA was developed for the Heidelberg Spectralis (Carlsbad, CA). Although there is no standardized definition of UWF, both devices capture a greater area of the fundus compared to the traditional seven ETDRS standard fields. Importantly, UWF angiography with the Optos captures a significantly wider total retinal area than the Heidelberg noncontact system.7

With these meaningful advances in fundus imaging, there is now emerging evidence that UWF FA may enable improved diagnosis, better classification, and earlier detection of disease progression, with the potential to guide our treatment strategies in patients with DR.

It is important to note that, although device manufacturers use the term UWF somewhat indiscriminately, the studies on DR and fundus imaging have been undertaken almost exclusively on the Optos device.

Because the Optos device images the widest field of view of any currently available commercial system, other devices may not capture the findings detected in DR patients by the Optos.

STUDIES OF UWF FA IN DR

UWF FA is especially advantageous for imaging microaneurysms, neovascularization, and nonperfusion associated with DR, which often occur in the midperiphery and periphery of the retina and may be missed on clinical exam or color photography.8

Several studies have suggested that the imaging capabilities of UWF FA provide greater sensitivity in the detection of early DR, compared to FA using standard photography.

One early comparison study of UWF FA and conventional FA demonstrated that UWF FA detected more retinal ischemia.9 In a retrospective study of 218 eyes of 118 patients with diabetes, UWF FA captured 3.9 times the amount of retinal nonperfusion and 1.9 times the area of neovascularization, compared with the simulated standard seven-field image.10

Additionally, 10% of patients with normal simulated standard seven-field FA had clinical findings on UWF FA, suggesting that UWF FA may be more sensitive for the diagnosis of peripheral diabetic disease in some patients. This undoubtedly has implications beyond the proper diagnosis and classification of patients with DR.

Indeed, in a retrospective review of 122 eyes of 70 treatment-naïve diabetic patients who underwent diagnostic UWF FA using the Optos, 26.3% of eyes with retinal nonperfusion also had diabetic macular edema, compared to only 8.7% of eyes without ischemia.12

Therefore, the ability to image peripheral nonperfusion using UWF FA has the potential to greatly improve clinical management of neovascularization and macular edema.

New guidelines for screening, monitoring, and treating disease will likely develop as we improve our ability to image larger areas of the retina and capture disease not previously visualized. 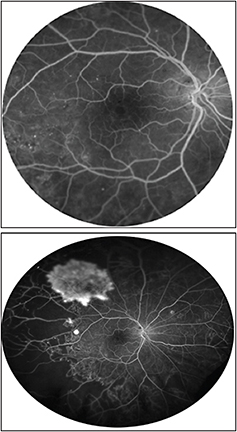 Figure 1. (Top) Traditional posterior-segment imaging of a patient with longstanding diabetes. Early background diabetic retinopathy changes are noted with no significant pathology requiring treatment. (Bottom) Optos UWF image of the same patient reveals significant pathology outside the traditional imaging. The peripheral retina shows areas of considerable ischemia and nonperfusion along with a large area of retinal neovascularization. This patient requires immediate intervention due to the extent of retinopathy noted on UWF imaging.

Patients with extensive peripheral nonperfusion or vascular leakage who have not yet developed neovascularization or macular edema are at increased risk of retinal disease progression.

The ability of UWF FA to better distinguish these patients may help us to identify a patient population that requires more frequent follow-up than recommended by the DRS and ETDRS guidelines, which were based on the standard seven-field images. 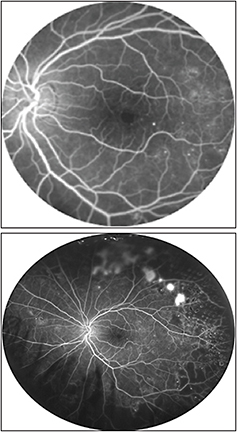 Figure 2. (Top) Traditional posterior-segment imaging of a patient with newly diagnosed type 2 diabetes. Early background diabetic retinopathy changes are noted. (Bottom) Optos UWF image of the same patient reveals significant pathology, including ischemia and neovascularization outside the traditional imaging area. This patient was treated with targeted panretinal photocoagulation using the UWF FA as a guide for lasering the areas of nonperfusion.

Whereas PRP is thus far not indicated for patients with retinopathy in the absence of neovascularization, our increasing ability to visualize specific areas of peripheral nonperfusion could guide PRP application in these patients.

Furthermore, UWF FA could alter the timing and frequency of PRP in all relevant patients. Initiating PRP to treat regions of retinal nonperfusion before overt neovascularization could reduce VEGF production and improve macular edema.

UWF FA may be used to guide the treatment of proliferative diabetic retinopathy. In one case, UWF FA directed the management of a patient with PDR combined with asteroid hyalosis.13

By visualizing the areas of retinal capillary nonperfusion and intermediate retinal ischemic zones, we may be able to spare healthy tissue with targeted therapy in place of PRP.14

Minimizing the amount of laser photocoagulation through a targeted approach is important; the DRS found that 10% of patients suffered a decrease in vision after PRP and 5% developed constriction of their visual fields.

Other complications of PRP described by the DRS include macular edema, choroidal detachment, hemorrhage, angle-closure glaucoma, and decreases in color vision and contrast.

UWF imaging is limited by its inability to image the entire retina to the ora serrata in a single unsteered image. The Optos device, with the widest field of view of any commercially available system, captures 200º of internal retina, corresponding to approximately 82% of the retinal surface area. However, with eye steering (eg, having the patient look in each cardinal direction), imaging to the ora serrata is easily accomplished in most patients.

Additionally, the projection of the three-dimensional UWF image onto a two-dimensional flat surface results in peripheral distortion in all UWF systems; this should be taken into consideration when determining measurements and quantification of peripheral retinal structures.

Although it is not yet possible to quantify the area of retinal nonperfusion using commercial systems, methods for correcting for the peripheral nonlinearity and quantifying peripheral pathology when evaluating the retina have been described and will undoubtedly become available.16

Finally, structures anterior to the retina may cause artifacts that may interfere with the interpretation of the fundus image and must be noted as artifacts, rather than retinal pathology.17

UWF imaging is becoming the standard of care for many retinal vascular diseases, especially in the setting of diabetes and DR. Peripheral lesions on UWF imaging not, seen on standard seven-field photography, have implications for the diagnosis, classification, treatment, and follow-up of patients with DR.18

Most studies to date have focused on retrospective analyses, typically from single centers of excellence. To validate these previous findings (and to gain even further insights into the role of UWF imaging in the setting of DR) larger multicenter, prospective studies are warranted. 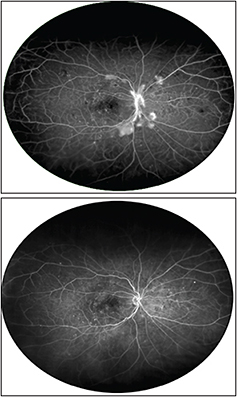 Figure 3. (Top) Optos UWF image of a patient with proliferative diabetic retinopathy. In addition to the optic nerve neovascularization, areas of neovascularization are noted along the superior and inferior arcades, both temporally and nasally. Peripheral ischemia is also noted. UWF imaging is essential to capture the extent of retinopathy completely. (Bottom) Optos UWF image of the same patient following three intravitreal anti-VEGF injections. There are complete regression of the neovascularization and considerable improvement in the peripheral ischemia. However, microvasular abnormalities are still present posteriorly and in the peripheral retina. UWF imaging is useful for following the treatment response to intravitreal injections.

Toward that end, a new DRCRnet protocol (Protocol AA) has been initiated to evaluate the association of peripheral findings on UWF color and FA using the Optos UWF technology with subsequent risk of DR worsening over four years.19

While the DRCRnet prospective study will undoubtedly answer many questions about the role of UWF imaging in DR, large multicenter, prospective studies of DR treatment based UWF findings are also needed; trials comparing targeted PRP using UWF angiography, for example, to true “panretinal” photocoagulation are necessary to properly elucidate the role of this treatment strategy.

Moreover, with the worldwide epidemic of diabetes and the increasing frequency of DR, UWF imaging may be more widely used for screening and telemedicine. Outside the realm of clinical practice, UWF imaging has an important role in disease documentation and research, because there are many retinal diseases involving peripheral retinal findings that must be better described. RP