Genes and stem cells, as well as new electronic and medical therapies, are gaining ground.

Current treatments for retinitis pigmentosa (RP) are limited, but a number of developments are poised to enter the field. Based on randomized clinical trials with vitamins and supplements, the only widely recommended treatment is supplementation with high-dose vitamin A palmitate and fish oil, along with avoidance of vitamin E, but these adjustments only delay degeneration.1,2

The accessibility of the retina for relatively safe surgical procedures and the immune privilege of the eye have made retinal diseases the ideal setting to use leading-edge tools, such as gene therapy and stem cell therapy, which have the potential to produce an effective treatment for some types of RP.

Gene therapy uses the machinery of viruses to insert normal genes into patients’ cells. This is a potentially effective method of treating genetic diseases with recessive mutations, in which no functional protein is produced (Figure 1).

Figure 1. Schematic illustration of gene therapy and gene repair. A) Diseases caused by recessive gene mutations can be treated by gene supplementation therapy. B) In diseases caused by dominant gene mutations, however, the protein produced by the mutated gene destroys the function of normal gene products, preventing gene supplementation therapy from being effective. Correcting the mutation with gene repair can treat the disease.

Figure 2. Fundus photograph from a six-year-old with early-onset retinal dystrophy caused by mutation in the gene encoding RPE65 (K295X and H68Y). Classic salt-and-pepper mottling can be seen.

Michael K. Lin, ScB, is a research fellow in the Bernard and Shirlee Brown Glaucoma Laboratory and Barbara & Donald Jonas Stem Cell and Regenerative Medicine Laboratory in the Edward S. Harkness Eye Institute and a medical student in the College of Physicians and Surgeons at Columbia University in New York. Yi-Ting Tsai, MS, is a doctoral student in the Institute of Human Nutrition at Columbia University in New York. Stephen H. Tsang, MD, PhD, is an ophthalmic geneticist and electroretinography (ERG) attending at New York Presbyterian Hospital. None of the authors reports any financial interest in any of the products mentioned in this article. Dr. Tsang can be reached via e-mail at sht2@columbia.edu.

RPE65 is expressed almost exclusively in the RPE, where it encodes an isomerase that converts all-trans-retinyl esters to 11-cis-retinal, which is important for rhodopsin and cone opsin function. Viral-mediated gene supplementation therapy inserts a normal RPE65 gene, which would theoretically rescue this enzyme activity and prevent retinal cell death.8-10

The adeno-associated virus (AAV) has been the vector of choice for a number of gene therapy trials due to its lack of pathogenicity and its ability to infect many types of human cells at an efficient rate.11 Although an innate immune response to AAV produces mild inflammation at some injection sites, humoral immunity is largely responsible for the rejection of AAV infection.

The retina, being part of the central nervous system, is an immune-privileged site, and it has little immune response to gene therapy with AAV administration.12 Nonetheless, patients are generally excluded for the presence of anti-AAV antibody titers in gene therapy trials. The use of AAV as the vector for gene therapy has also been limited by its capacity to carry less than 4.5 kb of DNA, which is a relatively small size for most applications.11

The successful administration of gene therapy is performed by subretinal injection of fluid containing the viruses, inducing a small retinal detachment that generally resolves within 14 hours.12

In eyes with the fovea included in the retinal detachment, there was a significant thinning of the fovea observed on OCT, compared to control eyes.13 Visual acuity improved to varying extents across the trials, and these improvements persisted with longer follow-ups.3-5,13,14

In another measurement of visual function, using dark-adapted visual field testing with computerized perimetry, which measures rod sensitivity after hours of darkness, gains in light sensitivity were noted to be localized in treated eyes to the regions where the subretinal injections were performed.13

Since the demonstration of safety and possible efficacy in the three initial phase 1 gene therapy studies for early-onset retinal dystrophy, the field has gained considerable momentum. These initial trials have increased patient enrollment, and a phase 3 clinical trial of AAV-RPE65 is currently under way (NCT00999609).

A Point of No Return?

However, although visual function improvements were maintained for some of the patients who received gene therapy in the initial trials, a follow-up study performed by one of the three initial groups showed that photoreceptors continued to die in treated retinas.15

The authors suggest that this finding indicates that retinal degeneration can be reversed in the early stages of the disease, before photoreceptor loss occurs and the condition will no longer allow rescue.15,16 According to this hypothesis, gene therapy would only prevent retinal degeneration in young patients who show no signs of photoreceptor loss.

The nature of this “point of no return” is being addressed in preclinical models, using animal studies to find potential ways to circumvent this barrier to therapy.17

Gene therapy has also been submitted to clinical trial for choroideremia (CHM), a form of retinal degeneration caused by an X-linked recessive mutation in the CHM gene, which encodes for the Rab escort protein-1 (REP1).18 The first results were reported from a gene therapy phase 1 trial performed in patients with near-normal VA who had choroideremia.6

After six months, two patients with low baseline VA had gains of 2 and 4 lines, and four patients with near-normal VA had decreases in VA of 1-3 letters. The results of a phase 1 trial should not be overinterpreted. Nevertheless, the safety demonstrated in this trial allows for further studies to explore efficacy.

A phase 1/2 trial was initiated by Sanofi (Bridgewater, NJ) in 2012 on Usher syndrome patients with mutation of the gene encoding MYO7A (NCT01505062). Mutation of MYO7A causes Usher type 1B, a syndrome involving congenital sensorineural hearing loss and RP. MYO7A (myosin VIIa) is a molecular motor that transports melanosomes, phagosomes, and lysosomes in RPE.19

While gene therapy corrects the genetic disease in existing cells, cell-based therapy is another promising option that could replace cells lost earlier in the disease process. The first transplantations of RPE cells in patients with end-stage AMD was performed in the early 1990s, using adult and fetal RPE tissue.21,22

Transplantation of harvested tissue presented concerns of ethical issues, infection, and quality control. Improved techniques of manipulating stem cells and primary cells have allowed for a shift to the use of cultured cells for transplantation.

Compared to AMD, RP has offered a greater challenge for cell-based therapy because transplanted photoreceptors must integrate with the neural circuitry of the host retina. In RP, transplanted mature cone photoreceptors are ineffective because they are unable to incorporate into the neuronal connections of the retina.

Using cells with greater differentiation potential, such as neural progenitor cells or stem cells, offers the potential to circumvent this issue due to their increased plasticity.

However, direct transplantation of stem cells carries a risk of developing teratomas. One potentially effective solution is transplantation of photoreceptor precursor cells, which have been shown in animal models to integrate into the host retina and improve vision.23 Because AMD and RP cell-based therapy use the same surgical technique and have similar safety concerns, the AMD trials are paving the way for future RP trials.

Ocata Therapeutics (Marlborough, MA) reported the results of two ongoing phase 1/2 studies using embryonic stem (ES) cell-derived RPE cells to treat retinal degeneration in AMD and Stargardt patients. There were no adverse effects from the transplantation, such as rejection or tumor formation, although adverse effects of the subretinal injection and immunosuppression were observed.24

One of the shortcomings of using ES cells is the need for immunosuppressive therapy to prevent rejection of the transplanted cells. Rejection can be avoided with the use of induced pluripotent stem (iPS) cells created from the patient’s own fibroblasts.25,26

Using an RP mouse model with a defective RPE65 gene, iPS-derived RPE cell transplants were shown to be safe and to cause functional improvement at the injection site measured by electroretinography, with successful incorporation confirmed with histology.27

A pilot study in Japan, begun in September 2014, is the first to use iPS cells in humans. A single patient was enrolled in this study of wet AMD treatment. The patient’s fibroblasts were used to generate iPS cells, which were differentiated into RPE cells and injected into the patient’s subretinal space. A successful outcome to this study would expedite the initiation of future trials using iPS-derived RPE cells in patients with RP and other diseases, such as Parkinson disease.

A study using autologous bone marrow-derived stem cells to treat several retinal degenerative diseases, including RP, is under way at the University of California at Davis (NCT01736059).

For patients who have end-stage retinal disease, an electronic retina implant offers limited restoration of visual perception. Produced by Second Sight Medical Products Inc. (Sylmar, CA), the 60-electrode Argus II retinal prosthesis was shown to improve the ability of more than half of the 28 subjects in one study to identify the direction of motion of an object on a screen.28

The device consists of a camera worn attached to a pair of glasses, along with an electrode array placed epiretinally that transmits wireless signals from the camera to the retinal neural circuitry, as well as an electronics case on the sclera that connects with a ribbon to the electrode array (Figure 3). 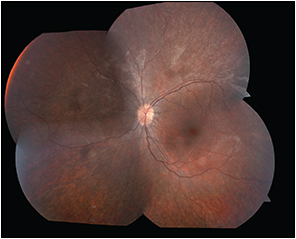 Because cone loss occurs secondary to rod loss, investigators have been searching for local growth factors or neurotrophic factors produced by rods and other surrounding cells that could maintain photoreceptor survival.

Another factor that has gained considerable attention over the past 10 years is called the rod-derived cone viability factor (RdCVF), which was discovered in 2004 using an assay to find genes that promoted cone survival.31 In a study reported in the past few months, gene therapy with viral vector delivery of RdCVF was shown to prolong cone survival in a mouse model of retinal degeneration, demonstrating a possible alternate approach to mutation-based gene therapy.32

Gene supplementation therapy is unable to overcome the dominant mutation in the same manner that a heterozygous wild-type copy would be ineffective. Similarly, stem cells produced using cells obtained from the patient would generate mature cells that have the same propensity to degenerate as the patient’s cells, which would not be effective for aggressive forms of RP.

Gene editing is the principle of specifically repairing targeted genes, and it is useful for studying and potentially for treating diseases (Figure 1). One of the new techniques in gene editing is adapted from a defense system against viruses found in bacteria, called clustered regularly interspaced short palindromic repeats (CRISPR), which are transcribed into trans-activating crRNA (tracrRNA), which works with CRISPR-associated (Cas) endonucleases to generate double-strand breaks in DNA, corresponding to the guide RNA.33

Using AAV viral vectors to package the Cas9 endonuclease and the guide RNA, specific genes were edited in the brains of mice.34 In another proof of principle experiment, gene editing using the Cas9 system was also demonstrated to be able to modify genes in human cell culture including iPS cells.35

The outlook for RP treatments is promising. Phase 1 and 2 clinical trials for gene therapy, stem cell therapy, and electronic retina have been fairly positive in terms of safety and limited evaluations of efficacy.

The results of these studies are encouraging further investigation into the basic physiology of the retina, as well as the mechanisms of effective prevention and reversal of inherited retinal degenerations. RP