The availability of smartphones has been increasing in the United States and worldwide over the last decade. It is estimated that approximately 60% of adults in the United States have a smartphone,1 and similar growth has been seen in many other parts of the world. On a daily basis, most ophthalmologists will have access to these devices, which provide a platform for capturing and sharing ophthalmic clinical images.

The first report of the use of the smartphones for this purpose was in 2010 by Lord et al,2 who showed that these devices could be used for many clinical and educational tools, including capturing images of the eye, such as external photos, slit-lamp photos, and fundus photos.2 Since then, newer techniques and modifications have resulted in the acquisition of high-quality images that compare to images obtained with more expensive ophthalmic imaging devices.

Fundus photography is an essential part of an ophthalmic practice because it allows for photodocumentation of intraocular pathologies and for diagnosis and sharing of encrypted information with colleagues and patients. Acquisition of high-quality fundus images requires a combination of appropriate optics and illumination, usually with a condensing lens and a coaxial light source.3

Traditional fundus cameras are expensive and have problems with convenience, compatibility, and portability. In contrast, smartphones are readily available, relatively inexpensive, easy to operate, and compatible across various platforms and systems, making them ideal for use outside traditional office settings and in remote areas of the world.

In this article, we will review the different techniques that have been reported for smartphone fundoscopy and their use in screening and telemedicine.

Luis J. Haddock, MD, is assistant professor of clinical ophthalmology at the Bascom Palmer Eye Institute of the University of Miami Medical Center in Florida. Cynthia Qian, MD, is a clinical fellow in ophthalmology at the Massachusetts Eye and Ear Infirmary in Boston, MA. Neithe author reports any financial interests in products mentioned in this article. Dr. Haddock can be reached via e-mail at ljhaddock@med.miami.edu.

The following are approaches for using smartphones for fundus photography (smartphone fundoscopy).

• As an image transfer device, ie, the image from a conventional fundus camera is transferred to the smartphone and sent to another site

• As a digital camera attached to an existing fundus-examination device, ie, an ophthalmoscope or a slit lamp

The availability of smartphones and their extensive mobile-phone networks make these devices ideal for telemedicine. The transfer of images to these devices is readily available through existing ophthalmic digital software. These images can then be easily sent for remote expert consultation, to be reviewed in a traditional office workstation or on another smartphone.

Fundus photo assessment of diabetic retinopathy has been shown to be similar when reviewed at a traditional workstation or on an iPhone (Apple, Cupertino, CA).4 For the protection of privacy, all image acquisition and transmittal must be handled with strict attention to the confidentiality of personal data in accordance with the Data Protection Act.

Most smartphones come equipped with a high-megapixel camera and high-resolution video capabilities (1,080 pixels). Initial approaches to smartphone fundoscopy consisted of using a fundus lens, 78 or 90 D, and a smartphone attached to the slit-lamp eyepiece. Although fundus imaging with this technique was successful, the images were of low quality, and acquisition was difficult and cumbersome. This technique remains useful for imaging of the anterior segment; however, for fundus imaging, newer techniques have made image acquisition simpler and of higher quality (Figure 1).3

In January 2013, the FDA approved the iExaminer (Welch Allyn, Skaneateles Falls, NY), which is a smartphone adaptor system that attaches and aligns an iPhone to Welch Allyn’s PanOptic Ophthalmoscope, to use the iPhone’s camera to capture images of the retina and optic nerve, in combination with the iExaminer App (Figure 2).5 This device can capture fundus images without dilation of the pupil with 25º field of view. Although good images can be acquired with this device, especially of the optic nerve, fundus imaging is limited by the narrow field of view.

Various slit-lamp adaptors have been created for ocular imaging with smartphones. Most of these adaptors simplify attachment of the phone to available slit lamps and align the smartphone camera with the ocular of the slit lamp. The focusing and images are obtained through the smartphone’s built-in camera apps and optical lens. Most of these adaptors have been designed for anterior-segment imaging; examples include EyePhotoDoc (Fullerton, CA), Zarf’s (Spokane, WA) iPhone adapter, and the Keeler’s (Broomall, PA) Portable Slit Lamp iPhone 4 image adapter (Figure 3).6,7 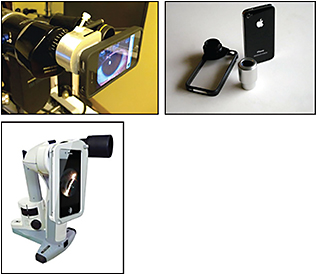 Subsequent use of these adaptors for slit-lamp smartphone fundus imaging has been successful; however, the image quality has been poor due to difficulty with optics and illumination through the 78- or 90-D lenses on the slit lamp.

Hardware attachments for smartphone fundoscopy have been developed with built-in optical devices to image the retina without any external equipment. Giardini et al8 recently reported on a new adapter for the Samsung (Ridgefield Park, NJ) Galaxy S III smartphone, which is a low-cost alternative to a direct ophthalmoscope and can capture high-quality fundus images, including the optic nerve (Figure 4). 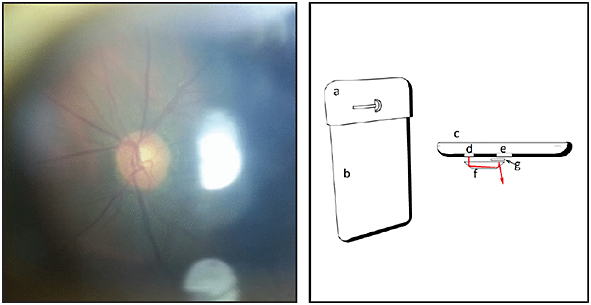 This group also developed smartphone software to use with this adapter that integrates image acquisition, optic nerve cupping grading, and image transmission. In their study, optic nerve smartphone images were obtained in the field by operators without any ophthalmic background. This group showed that, once the photos were obtained by both methods, glaucomatous disc grading by masked experienced graders on the smartphone-captured images was comparable to that of images captured on traditional cameras.

Russo et al9 recently reported on the use of the D-Eye adapter (Si14 S.p.A., Padua, Italy), which magnetically attaches to the smartphone and can capture fundus images of an approximately 200º of field of view (Figure 5). Using images captured with this device they showed substantial agreement in the grading of diabetic retinopathy between the smartphone fundoscopy and slit-lamp fundus examination by masked examiners. 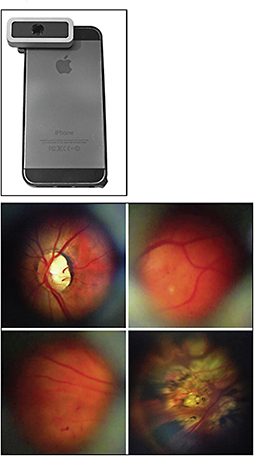 Briefly, this technique takes advantage of the smartphone’s technology, built-in apps, and third-party external apps. For this technique, a light source, a video app, a still image extraction app, and a condensing lens for retinal examination (20 D or 28 D) are needed. Newer smartphones, such as iPhone models 4, 5, and 6 and phones running the Android operating system (Google, Mountain View, CA), have integrated light sources adjacent to the camera, allowing for adequate illumination of the fundus during indirect ophthalmoscopy.

The light levels of the iPhone 4 were tested by Kim et al11 and were found to be well within the safety standards for human eyes and 10 times less than the levels produced by the commercially available Keeler Vantage Plus LED indirect ophthalmoscope. Fundus images are captured in the video mode for ease of acquisition.

The Filmic Pro app (Cinegenix LLC, Seattle, WA) was found to provide control of the light intensity and independent control of focus and exposure, which are required to obtain high-quality fundus images with this technique.

Recent updates of the iPhone software (iOS 8) allow for focus and exposure locks within the camera app, which also provide sufficient control for adequate image acquisition. High-definition images are then extracted from the videos using the built-in image review app and screen-grabs or external apps, such as MovieToImage (DreamOnline, Inc., Tokyo, Japan) or Video 2 Photo (PacoLabs, Paris, France). High-quality fundus images can be obtained with this simple and inexpensive technique (Figures 6 and 7). 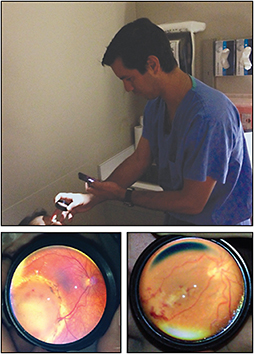 Figure 6. Top image shows filming setup with user holding the iPhone for filming with the Filmic Pro app in one hand and a 20-D lens for focusing on the retina in the other hand. Bottom left image shows retinoblastoma (partially treated) imaged during examination under anesthesia. Bottom right image shows retinal vasculitis imaged in an emergency department setting.
REPRODUCED FROM HADDOCK ET AL10 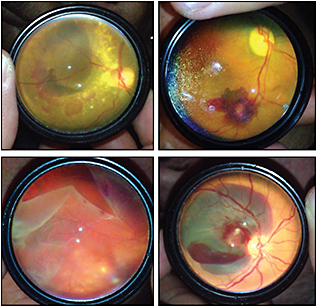 In February 2014, Myung et al12 reported on a three-dimensional printed lens holder attachment for the iPhone to capture images using this technique The authors were able to capture high-quality fundus images to document normal and abnormal fundus findings with this attachment. They reported that their adapter made the technique easier to master and reduced image acquisition time while maintaining high quality (Figure 8). 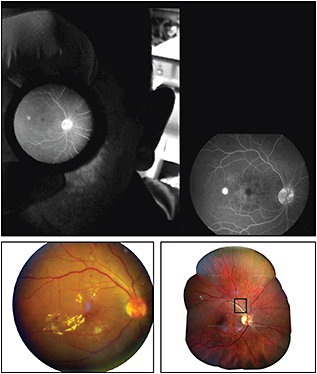 As smartphone and digital technology continues to evolve, newer phones will have better image-capturing capabilities, improved image processing software, and more accessible networks for image sharing and telemedicine. Recent publications have shown that more complex fundus imaging can be accomplished with smartphones.

Suto et al13 reported on a technique for performing fluorescein fundus angiography using a smartphone (Figure 8). Smartphone FA could be beneficial for bedridden patients, infants, and patients in poor resource settings. The authors’ technique used several peripheral devices, including a separate light source to control light intensity and excitation and barrier filters for the FA image acquisition. Newer iPhone models have available apps that can control light intensity, obviating the need for an external light source with this technique.

Suto et al were able to capture adequate images for diagnosing certain diseases, although they cautioned that subtle findings might be missed due to the quality of the images with the current technology.

In addition, Maamari et al14 described a prototype widefield lens attachment for the smartphone called Ocular CellScope, which can slide into the phone and capture widefield images using the phone’s built-in camera. Their technique could capture approximately 55º of the fundus in a single image (Figure 8). Additional software could be used to stitch together the images to capture a larger overall image of the fundus.

In conclusion, smartphone fundoscopy can be achieved with multiple techniques. Newer smartphones are able to capture excellent high-quality images with and without hardware attachments. Simpler techniques, such as that described by Haddock et al,10 only require a smartphone and a lens without any additional hardware, making it ideal for rural settings or poor resource areas. Other techniques require hardware attachments that, when readily available, make the technique easier to master and that may improve image quality.

The images obtained with smartphone fundoscopy are typically not as sharp as those obtained with traditional cameras; however, they are of sufficient quality to be interpreted, and recent studies have validated their potential for screening and telemedicine. For example, the recent reports by Giardini et al8 and Russo et al9 showed that smartphone funduscopy images could be successfully used to screen for glaucoma and diabetic retinopathy. The results were comparable to standard images or examinations, and they could largely expand its utility in the community setting and in isolated rural areas with poor resources.

The current literature on smartphone funduscopy suggests that the limitations of the technique and its applications lie in image quality and field of view, as well as universalizing its accessibility on all types of smartphones, including iOS, Android, Windows (Microsoft, Redmond, WA), and other operating systems. Additional validation studies will be needed to integrate this technology into everyday practice.

The integration of smartphone fundoscopy into our ophthalmological practice appears promising and could expand the reach of ophthalmic screening, diagnosis and documentation while reducing costs. RP