Telemedicine in the Diagnosis of Retinal Disease

Telemedicine is the use of medical information exchanged from one site to another via electronic communications to improve a patient’s clinical health status. The use of telemedicine has spread rapidly across all medical disciplines and also has several applications in the diagnosis and management of retinal diseases.

As retina specialists, we are well versed in the acquisition and interpretation using our myriad of imaging technologies. In this article, we explore the role of the emerging field of telemedicine, which harnesses retinal imaging technologies in the areas of diabetic retinopathy, age-related macular degeneration, and retinopathy of prematurity (ROP).

Seema Garg, MD, PhD, is associate professor of ophthalmology at the University of North Carolina at Chapel Hill. Edward Chaum, MD, PhD, is Plough Foundation Professor of Retinal Diseases at the University of Tennessee Health Science Center in Memphis. Darius M. Moshfeghi, MD, is professor of ophthalmology at the Stanford University School of Medicine in Stanford, CA. He reports financial interests in Clarity Medical Systems, Visunex, and SUNDROP. The other authors report no financial interests in products mentioned in this article. Dr. Garg’s e-mail is seema_garg@med.unc.edu.

Recent estimates have revealed that 28.5% of individuals older than 40 years old with diabetes have diabetic retinopathy, and 4.4% of these individuals have advanced retinal disease that could lead to vision loss.1 It is well known that early detection of DR is crucial to preventing blindness. Medical and surgical therapies have dramatically reduced the disease’s progression, and timely intervention can reduce the risk of severe vision loss by more than 90%.2

Barriers to improved DR surveillance include socioeconomic factors, geographic challenges, and lack of patient and physician awareness regarding the importance of annual retinal examinations, as well as cultural barriers among minorities. Because the prevalence of diabetes is projected to increase from 25 million Americans to 125 million Americans by 2050,4 the number of patients with diabetes requiring annual retinal evaluations will far exceed the capacity of ophthalmologists. This is where telemedicine can play an important role.

While many patients with diabetes will not or cannot see an ophthalmologist regularly, they will see their primary care physician, on average, three to four times annually. Therefore, introducing telemedicine technology at the point of care of the PCP could substantially reduce barriers to access and improve rates of early detection of DR.

In the primary care office, where this equipment can become available, a trained clinical staff member can take a retinal photograph with a nonmydriatic camera. The images can be sent securely over a HIPAA-compliant, Internet-based network to a retina specialist, who can classify the retinal images according to the severity of retinopathy.

The retinal specialist can transmit a report detailing the findings and referral recommendations to the originating PCP within 24-48 hours, and that report can be immediately incorporated into the patient’s electronic medical record (Figure 1). 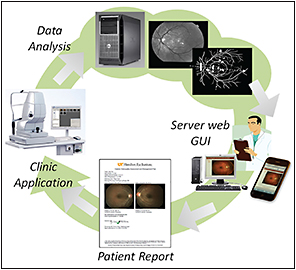 Figure 1. The cycle of telemedicine, illustrating how remote images can be incorporated into the treatment plan for the patient with DR.

Locally, we have demonstrated the success of a telemedicine network for DR evaluation at the University of North Carolina at Chapel Hill. Over the past six years, we have collaborated with the university’s primary care clinics with a diverse patient and payer mix. The program has been very successful, resulting in an increase in DR evaluation rates from 32% before implementation of the telemedicine network to 71% within one year.5

We took this program statewide by creating the North Carolina Diabetic Retinopathy Telemedicine Network, a two-year project funded by the Duke Endowment. The Network brings DR evaluation via telemedicine to primary clinics in rural North Carolina, where current DR evaluation rates are as low as 13%. We have imaged more than 1,000 patients in one year and have improved evaluation rates, as well as improved access to care to the underserved.

In the United States, the largest DR telemedicine program is in the Veterans Administration, which has successfully performed more than one million imaging sessions on veterans with diabetes over the past five years.6,7 Internationally, the United Kingdom has implemented the best example of a widespread successful DR telemedicine program, ensuring that nearly 90% of all patients with diabetes are assessed for diabetic eye disease.8

Locally, nationally, and internationally, telemedicine is an emerging strategy using digital retinal imaging with remote expert interpretation. Introducing this technology in the PCP’s office could substantially improve early detection of retinopathy and ultimately reduce rates of blindness among patients with diabetes.

The potential application of evolving telemedical screening paradigms to the diagnosis and management of other blinding retinal diseases like AMD, through image management in the primary care space and subjective data collected from the patient-centered “home,” is rapidly becoming a reality.

Established telemedical infrastructure that is currently being used to acquire retinal images for the purpose of DR screening can similarly be applied to the acquisition of fundus photographs from patients with AMD, for the remote assessment of disease features by qualified readers.

However, similar to the use of two-dimensional color images for the photographic assessment of DR, there are some inherent limitations to methods from which 3D features can be difficult to discern and which must be inferred. These limitations are particularly relevant to the diagnosis and stratification of disease in patients with AMD.

Clinically, we use several different imaging modalities and image analysis methods to detect and quantify drusen, geographic atrophy, and the presence and features of choroidal neovascularization (Figure 2). Cross-sectional optical coherence tomography images (and to a lesser degree today, fluorescein angiography) are the mainstay of clinical assessment and patient management in the retina practice. However these platforms (particularly invasive angiography) are not currently translatable into scalable technologies for application in the primary care setting due to cost and ease of use.

There have been a handful of published reports demonstrating the presence of disease features of AMD and the ability to detect AMD in nonmydriatic DR screening networks.9-12 The prevalence of AMD ranged from 0.95% in a population of 696 predominantly younger African-American patients to 12%-16.3% in older and Veterans Administration patients.

Prospective studies of digital color images used as a screening tool for AMD, followed by formal examination, showed fundus photography to be sensitive (82-84%) and specific (79-81%) and to have a high negative predictive value for AMD (88%).13,14

The concept of teleconsultation for patients with diagnoses of AMD has also been evaluated. A consultative ophthalmic network reduced delays in referral (mean 5.5 days vs 28.7 days) and consequently showed improved treatment outcomes.15

Of particular interest are technologies that permit home-based and more patient-centric and efficient screening of disease progression in patients with diagnosed AMD. Hyperacuity perimetry methods have been demonstrated to be effective in detecting both the new onset of metamorphopsia associated with active CNV membranes in “wet” AMD and in distinguishing neovascular disease from intermediate forms of atrophic disease.

In prospective PHP studies, the specificity of detecting new CNV from the intermediate stage AMD was 84% to 88% (95% CI, 76%-95%).18 In the AREDS2-HOme Monitoring of the Eye (HOME) study, 757 patients were randomized to standard care or remote telemedical monitoring of vision. The study demonstrated earlier detection and fewer letters lost from neovascular disease in patients randomized to the device arm.19

These studies clearly demonstrated the potential of remote, telemedical screening paradigms to assist in the management of AMD. In the future, less expensive, more scalable devices will allow for broader distribution of monitoring platforms to large numbers of patients at risk for AMD, and they have the potential to improve management and clinical outcomes and to better preserve vision.

The most recent Joint Statement screening guidelines for ROP included RDFI for ROP screening.24 The entire paradigm of ROP screening has evolved from that primarily performed by practitioners at the bedside using BIO to that using remote interpretation with RDFI.

A typical work flow in a ROP telemedicine screening network is the following.

1. The neonatal intensive care unit identifies the infant’s eligibility for screening according to the Joint Statement Screening Guidelines.

2. A nurse or physician photographer in the NICU applies topical anesthetic and dilation (cyclopentolate 0.2%/phenylephrine 1%) an hour before photography.

3. An Alfonso speculum is introduced into the eye.

4. An external photograph of each eye is obtained.

5. Five fundus photos in each eye are obtained (optic nerve centered, left, right, up, and down) using a 130° lens.

6. The images are either transferred via secure e-mail or synchronized directly with the camera and the central grading server using commercial software.

7. The grader verifies receipt of the images, interprets each image for each patient, and then generates a report with recommendations.

8. The report is then sent back to the client NICU via secure e-mail or fax in a HIPAA-compliant fashion.

9. The physician team leader in the NICU, in conjunction with the ROP coordinator, evaluate each report and then update the NICU’s ROP screening eligibility list with the grader’s recommendations.

Why Telemedicine Screening for ROP Is Successful

ROP is well-suited for remote screening because a baby will usually either have completely normal, mature retinal growth or end up needing treatment or progressing to blindness within a 15-week screening period. In all 50 states, there is a regulatory requirement for NICUs to provide ROP screening to maintain accreditation, and every hospital has a financial incentive for the NICU to remain accredited.

This three-party system — NICUs requiring accreditation and thus paying for ROP screeners, ROP screeners needing to be accurate, and a short-term course for good or bad outcomes to prevent adverse outcomes adjudicated by the legal system — has resulted in one of the few telemedicine targets in which there is a mandate to screen and reimburse and a penalty for failure to screen. For corresponding disease states, such as DR, glaucoma, or AMD, there is a moral and ethical mandate, but no legislative mandate.

In China, Brazil, Spain, and Hungary, several screening programs focus on newborn screening for ocular disease with reports of birth hemorrhages in 10% to 20% of full-term infants, with 1.5% to 2.5% of these hemorrhages affecting the fovea. Untreated vitreous hemorrhage can result in asymmetric high myopia and amblyopia in as short a time as 4-12 weeks.

Similarly, cataract and persistent fetal vasculature surgical outcomes are superior if intervention occurs earlier. The Newborn Eye Screen Testing (NEST) program at Stanford University was initiated nearly one year ago. RDFI and OCT testing are offered to all newborn infants ≥37 weeks of gestational age. The infants receive one external photograph of the whole face (to evaluate for syndromic findings), an external photograph of each eye to evaluate the anterior segment and the media, five fundus photographs in each eye (as per PHOTO-ROP), and a high magnification view of the optic nerve. These images are graded by a pediatric retina specialist, and follow-up is arranged with pediatric ophthalmology and/or pediatric retina as indicated.

Pediatric teleophthalmology, specifically in retina, has flourished because of unique matching of technology with disease. ROP screening is not only viable, sanctioned as a method by the governing bodies, and validated by numerous scientific studies, but it ultimately may also be the most cost-efficient manner for performing screening.

Universal retinal screening is a natural development that aims to replicate universal hearing screening tests in the full-term population, to identify children at risk for vision loss, and to make appropriate and timely referrals. As telemedicine evolves, more technologies, such as OCT and ultrasonography, may be included. RP