Traumatic Macular Holes In the Pediatric and Adolescent Populations

Blunt trauma is the predominant cause.

A macular hole is a full-thickness retinal defect in the central macula, believed to be caused by vitreoretinal mechanical forces; when trauma causes these forces, we specifically describe the hole as a traumatic macular hole.

Traumatic macular holes occur relatively infrequently, with an estimated incidence of 1.4% among closed globe injuries and 0.15% of open globe injuries.3 Most of these injuries result from blunt trauma, such as a soccer ball to the eye, although reports exist of other causes, such as accidental Nd:YAG laser burns.4

Importantly, other trauma-related pathologies can occur at the time of injury, including commotio retinae, choroidal rupture, or retinal tears; these pathologies can all limit final visual potential.

Christina Y. Weng, MD, MBA, and Audina M. Berrocal, MD, serve on the faculty of the Bascom Palmer Eye Institute of the University of Miami in Florida. The authors report no conflicts of interest relative to the contents of this article. This research was supported in part by NIH Core Grant P30EY014801, a Research to Prevent Blindness Unrestricted Grant, and the U.S. Department of Defense (DOD Grant #W81XWH-09-1-0675). Dr. Weng’s e-mail address is c.weng@med.miami.edu.

The exact pathophysiology of traumatic macular holes is still debated, but it is likely related to a contrecoup mechanism that occurs with acute axial compression of the globe, resulting in a compensatory equatorial expansion, which increases vitreomacular traction forces.5

Because of the definite relationship between traumatic macular hole development and ocular trauma, traumatic macular holes are more prevalent in the pediatric and adolescent populations. Of 11,320 cases in the United States Eye Injury Registry, approximately one-quarter of all blinding ocular injuries occurred in the 10- to 19-year-old age group.3

Unlike idiopathic macular holes, with which posterior vitreous detachment typically occurs, Huang et al found a uniform absence of PVD in all cases of traumatic macular holes in this series.

Traumatic macular holes tended to possess a more irregular configuration compared to the smooth circular edges of idiopathic macular holes, and the authors believed this difference to be related to the causative mechanism.5

Cases that close spontaneously tend to occur in younger patients with smaller holes measuring less than 0.33 disc diameter without a fluid cuff,7 although reports have appeared of spontaneous closure with larger holes.8

Mizusawa et al observed 10 eyes for a mean follow-up of 19 months and found that 10% of traumatic macular holes closed spontaneously, compared to the 4% of idiopathic macular holes Freeman and colleagues reported.9,10

Kusada et al reported a series of three traumatic macular holes in patients 12-18 years old; all three closed spontaneously three to four months after trauma.11 Yamashita et al reported a case series of 18 traumatic macular holes, of which eight closed spontaneously within one week to four months after initial trauma.12 All of the patients were male and young (average age of 14.6 years old) and none had a PVD.

In cases in which spontaneous closure does not occur, the physician may elect to proceed with surgery. While pars plana vitrectomy is currently the standard of care for idiopathic macular holes, as first introduced by Kelly and Wendel in 1991,13 its application in traumatic macular holes remains unclear.

The majority of patients reported a visual acuity improvement of two or more Snellen lines in both studies,5,14 and 64% of patients achieved a postoperative visual acuity of 20/50 or better in the study by Johnson et al.5

Figures 1-3 exhibit the case of a 11-year-old boy who suffered a laser injury resulting in a traumatic macular hole. He underwent PPV, internal limiting membrane peeling, air-fluid exchange, and C3F8 gas tamponade at the Bascom Palmer Eye Institute, and he achieved an excellent outcome, with closure of the hole and final visual acuity of 20/25. 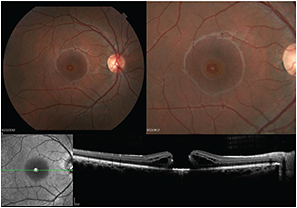 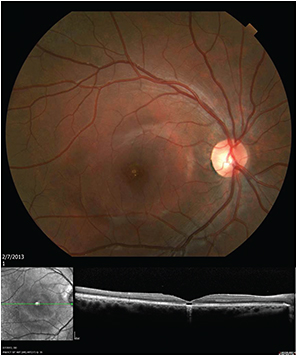 Figure 3. The same patient in Figures 1 and 2 at one year post-trauma and -surgical repair. SD-OCT shows closed macular hole; the outer retina appears to be remodeling. No fundus photo was available. The patient had final vision of 20/25.

The technique of traumatic macular hole repair typically involves standard three-port PPV with identification, elevation, and removal of the posterior hyaloid. We have found that the use of diluted (1:3) intravitreal triamcinolone acetonide can be helpful in delineating the posterior hyaloid.

Sometimes, the surgeon may need to stain twice to achieve sufficient visualization. Many surgeons will also peel the ILM. The surgeon performs air-fluid exchange and then places a tamponade agent. Identification and removal of the posterior hyaloid is a critical step in the successful surgical repair of a traumatic macular hole.

Although a partial PVD is sometimes already present in eyes that have experienced trauma, the composition of the vitreous and adherence of the vitreoretinal interface in the pediatric and adolescent population often make the induction of PVD especially challenging, increasing the risk of complications, such as iatrogenic retinal breaks or vitreous hemorrhage.

As a result, authors have examined the use of adjunctive agents, such as TGF-β 2,15 platelet concentrate,16 plasmin,17,18 or autologous serum.5

Use of Adjunct Platelet Concentrate

At a mean follow-up of 35.2 months, the authors observed primary hole closure in all patients, with marked visual acuity improvement of 3-7 Snellen lines.16

Use of Autologous Plasmin

The patients’ blood was obtained three days before surgery, and the plasminogen was then purified using affinity chromatography. It was then converted to plasmin by streptokinase and was stored at 4ºC. The surgeons injected 0.4 IU of plasmin in a volume of 0.1 or 0.2 mL, during or immediately preceding PPV.

The authors suggested that PVD induction was facilitated, and they reported macular hole closure and vision improvement of 4-8 Snellen lines in all eyes. Three of the four eyes developed posterior subcapsular cataracts postoperatively.18

In 2007, Wu et al17 studied 13 pediatric patients whose ages ranged from 1 year to 15 years. The surgeons used 2 IU of autologous plasmin at the commencement of the case and allowed for a 15-minute waiting period before beginning PPV. The study authors used gas tamponade in eight eyes and silicone oil in five. Patients underwent postoperative prone positioning for one week, with the youngest patient kept in prone positioning while sleeping.

No PVDs occurred preoperatively, but five eyes had either partial or complete PVD postinjection. The authors suggested that a PVD was “easily” induced in the remaining eight eyes. Twelve of the 13 holes closed, with corresponding visual acuity improvement of 2 or more Snellen lines.17

In the past, the use of autologous plasmin was limited because of the required purification process and enzymatic instability. However, with the recent approval of ocriplasmin (Jetrea, ThomboGenics, Iselin, NJ), a recombinant truncated form of plasmin, greater application of this adjunctive agent in the pediatric population to treat traumatic macular holes, as well as other pathologies, is possible.

No consensus exists on the ideal intraocular tamponade if a PPV is the chosen management option. At Bascom Palmer, we have observed cases of successful closure in children, in which air was the only tamponade agent used, suggesting that a tamponade might not be needed at all.

However, because of the desire to avoid multiple surgeries in children, surgeons generally will elect to use a gas tamponade, with which the most experience has accrued in macular hole repair.

One disadvantage of using a gas tamponade is that most vitreoretinal surgeons consider postoperative positioning to be necessary. In the pediatric population, this can be difficult, although we have found that young children can be surprisingly tolerant of face-down positioning, especially with some creativity.

In our experience, preoperative counseling with the child’s parents to determine how compliant a child may be with gas tamponade and subsequent positioning is an important part of the management decision-making process. Using an alternative such as silicone oil may be the only viable option for children or patients unable to comply with strict positioning.

Ghoraba and Ellakwa studied 22 patients who underwent vitrectomy with silicone oil or intraocular gas for traumatic macular hole repair. They used silicone oil in children, and in patients unable to position and who had larger holes. The difference in the average age of the two groups was less than one year.

The authors believed this outcome was related to either the positioning of the group who received gas tamponade or the greater surface tension of gas compared with oil.19

Another consideration in deciding on the management of a traumatic macular hole is timing. Because reports in the literature of spontaneous traumatic macular hole closure in young children have generally observed closure within the first few months following trauma,12,20,21 some authors have proposed observation for three to six months and then proceeding with surgical intervention if closure does not occur in this time frame and if the potential for visual improvement exists.

In young children, the timing may be especially critical to prevent deprivation amblyopia. It is also important to discuss cataractogenesis as an eventual consequence of PPV in young patients.

Pars plana vitrectomy with tamponade has demonstrated a high success rate in studies examining repair of traumatic macular holes in this population. Silicone oil, rather than gas, may be the required tamponade agent secondary to positioning limitations in this age group.

Additionally, due to the inherent difficulties in inducing a PVD in children and adolescents, several studies are currently under way to examine the efficacy of adjunctive agents that may facilitate the separation of the posterior hyaloid face from the ILM.

Treatment success is multifactorial and depends on both surgeon factors (ie, we feel strongly that peeling the ILM allows for a higher rate of hole closure) and patient factors (eg, having motivated parents involved in the postoperative course; we believe that the intrinsic elasticity of the retinal tissue in younger patients lends itself to higher closure rates than older populations).

The relative rarity of traumatic macular holes presents a challenge to the study of this condition, and larger studies are necessary to explore more intricately the natural history of this condition in children and adolescents, as well as its optimal management. RP