In patients with panophthalmitis, retinal physicians may need to manage the anterior segment.

Infectious endophthalmitis is a clinical diagnosis characterized by microbial contamination of the aqueous and/or vitreous. A variant of endophthalmitis is panophthalmitis, in which the signs of infection extend to and include the ocular interfaces and structures (Figure 1). 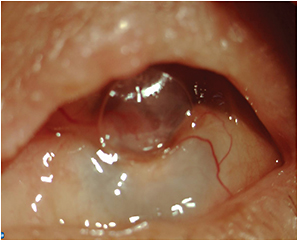 Figure 1. Postacute panophthalmitis. This patient declined orthodox medical treatment. Unfortunately, the eye became phthisic and was enucleated. The clinical picture reveals an opaque cornea with an intraocular lens extruding from the site of the cataract section

The criteria for panophthalmitis are involvement of the cornea, sclera, and orbital contents. Fortunately, fulminant panophthalmitis is rare, but unless the infective organism is of low virulence or the infection quickly contained, adjacent structures can become involved.1

In the acute reactive stage of endophthalmitis, the anterior-segment signs usually predominate. With the cornea edematous, keratic precipitants scatter on the corneal endothelium, together with the pathognomonic sign of endophthalmitis: hypopyon (Figure 2). 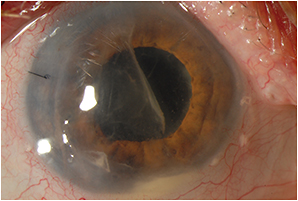 Figure 2. Endophthalmitis associated with glaucoma drainage device. The Seton can be seen at the 1 o’clock position. There was loss of a red reflex and an extensive hypopyon.

Phakic eyes typically develop lens opacities in the weeks to months after the infection has resolved, whereas fibrin deposition on both sides of the intraocular lens is a common finding in the acute phase for the pseudophakic patient.

Fibrin can also coat the crystalline lens in patients with severe anterior uveitis, but this sign is rarely seen with infectious endophthalmitis. Conversely, fibrin on glaucoma drainage setons, along with other inflammatory markers, is highly suggestive of an infective etiology. Should the fibrin extend and involve the lumen of the device, aqueous outflow will be impeded, causing the tube to become nonfunctioning (Figure 2, page 50).

Philip J. Polkinghorne, MD, BSc, FRCOphth, FRANZCO, is associate professor in clinical ophthalmology at the University of Auckland, New Zealand. He reports no financial interests in any products mentioned here. His e-mail is pjpolk@pjpolk.co.nz.

Glaucoma patients who have undergone conventional drainage surgery (with or without antimetabolites) are also at risk for endophthalmitis.2 The drainage bleb may be the source of intraocular infection or the conduit for extraocular spread.

An abscess of the bleb usually appears white and translucent, whereas adjacent ciliary and conjunctival vessels are infected (Figure 3). Purulent discharge is commonly present in these eyes. 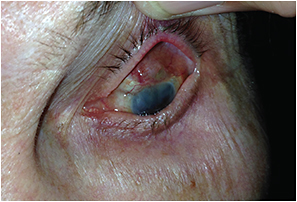 Figure 3. Bleb-related endophthalmitis. The bleb is cystic, thin, and translucent, whereas the surrounding vessels are engorged.

The presence of a corneal suture may indicate surgeon preference or that the surgery was prolonged and difficult, if not frankly complicated. An inflamed eye in this setting is unlikely to be sterile, unless the patient has a previous history of inflammatory eye disease.

Similarly, adhesion of iris to the cataract section rarely causes a uveitic syndrome in the immediate postoperative period, so inflammatory signs in this setting are more suggestive of an intraocular infection.

Delayed-onset manifestations of endophthalmitis involving the anterior segment include hypotony, band keratopathy, and corneal opacification. This last condition is more common if the hypopyon was extensive and chronic.

Posterior synechiae are commonly noted in both phakic and pseudophakic eyes. The risk of developing a clinically significant lens opacity in a phakic eye has already been noted.

Phacodonesis may coexist with this complication, making any subsequent surgery difficult. Iris atrophy and an atonic pupil are other late-onset manifestations of endophthalmitis. Iris atrophy may unmask radial iris vessels (Figure 4). 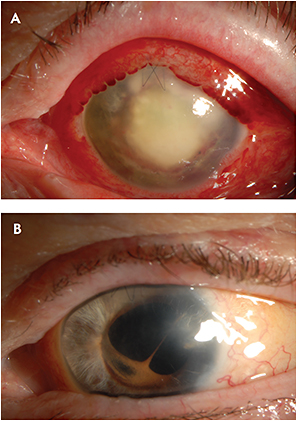 Figure 4. This patient had undergone complicated cataract surgery, presenting some four days later with endophthalmitis (A). The infection was adequately treated, but the iris became atrophic and the functional outcome was poor (B).

Aggressive management of the infection and controlling the adverse effects of inflammation are the keys to limiting the morbidity associated with endophthalmitis.4

The physician should begin cycloplegia with the first-line medications, while topical steroids can be instituted as soon as it is deemed safe. With this approach, the physician can mitigate the toxic effects of the infection and limit the acute and long-term sequelae of endophthalmitis.

The management of corneal edema in patients with endophthalmitis is influenced by the underlying mechanism(s). The cornea may become edematous as the result of the direct toxic effects of the infection or as a side effect of treatment. The extent of the insult explains the variable amount of edema observed.

Controlling the infection and the use of topical steroids should limit the edema arising from infection, whereas preservative-free drops will reduce the risk of epithelial edema from the frequent installation of drops.

Raised IOP secondary to trabeculitis or outflow obstruction can also compromise the integrity of the cornea, requiring a combination of a topical steroid and pressure-lowering therapy to resolve the edema.

The presence of a small hypopyon does not usually necessitate any intervention, but if posterior-segment surgery is planned and the view is limited, removal of the hypopyon should be considered.

The surgeon can best achieve this goal through the use of a viscoelastic with adhesive characteristics. The surgeon passes the cannula into the anterior chamber through a paracentesis and directs it to the bulk of the hypopyon (Figure 5, page 52). 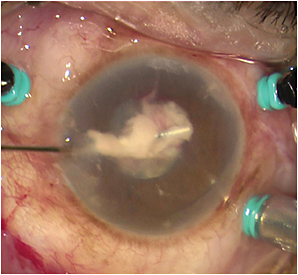 Figure 5. An intraoperative photograph demonstrating the use of an adhesive viscoelastic to separate a hypopyon from the iris.

The viscoelastic is carefully injected in such a way to compress the hypopyon and, in the process, reduce the adhesions between the inflammatory mass and the angle, lens, and/or iris.

Furthermore, converting the hypopyon from a dispersed precipitant to a smaller volume enables the hypopyon to be removed more easily, either with intraocular forceps or a small-gauge vitrector.

Compressing the hypopyon also reduces the risk of touching the lens in a phakic eye. It also avoids otherwise extensive and piecemeal removal, which is often necessary when the hypopyon is widely adherent to the intraocular surfaces.

Removing fibrin and other inflammatory material from a glaucoma drainage seton is technically difficult. The lumen of the commercially available seton is small, and mechanical removal is not normally possible.

Irrigating the tube with a cannula, either from the anterior-chamber location or at the extraocular drainage site, has not proved fruitful. An alternative strategy to remove the inflammatory material from the lumen is to inject a small aliquot of tissue plasminogen activator into the anterior chamber. While this is an off-label indication, the safety for intraocular usage is relatively well-established, and a dose of 25 µg in 0.1 mL produces good outcomes in most cases.5

Fibrin may also enhance inflammatory adhesions associated with posterior synechiae and pupillary miosis. Unless the patient is pseudophakic, these adhesions are best treated pharmacologically, with mydriasis and anti-inflammatory medications. Mechanical dilatation of the iris in phakic eyes should only be considered if the lens is going to be sacrificed.

Performing lens surgery in eyes with endophthalmitis is notoriously difficult, so surgeons should avoid it if possible — certainly if the eye is grossly inflamed. The obvious exceptions would be a traumatized crystalline lens and or an infected eye with a retained intraocular body requiring removal through the anterior segment. In these scenarios, it is best to avoid inserting an intraocular lens during the primary surgery.

The IOL in pseudophakic patients need not be removed unless extenuating factors emerge, such as lens subluxation. The IOL may also be retained in eyes with delayed-onset endophthalmitis associated with Propionibacterium acnes. Certainly these patients may benefit from a surgical capsulotomy, but explantation of the lens is not normally required in the primary surgery.

It is tempting to think that differences may exist between endophthalmitis arising from an anterior-segment source and that in which the infective organism is introduced directly into the posterior segment.

To date, this dichotomy, if it exists, remains largely unexplored. Higher than expected numbers of Streptococcus infections have occurred in eyes receiving intravitreal therapy, compared to eyes undergoing cataract surgery.7 Another group3 found that patients reported pain less commonly when the endophthalmitis was secondary to a metastatic source.

Ultimately most cases of endophthalmitis involve both the anterior and posterior segments by the time of diagnosis, so treatment strategies are necessary to deal with all relevant issues. RP