The retinal physician is often the first to detect it.

Major advancements in research have enabled a better understanding of the epidemiology, pathogenesis, associated systemic conditions, and clinical implications of hypertensive retinopathy.3

Among the major advances are the use of digital fundus photography to capture hypertensive retinopathy signs, particularly early signs, and the application of computer-based techniques to measure early changes, such as generalized retinal arteriolar narrowing.3,5-7

Based on these research approaches and data, an updated classification of hypertensive retinopathy into mild, moderate and malignant stages appears to allow for easier clinical use.2,8

Newer retinal imaging tools can now provide precise, and even dynamic, quantification of subtle retinal vascular signs associated with hypertension. However, whether we can use these newer techniques clinically remains to be determined.

Hypertensive retinopathy, first described as “albuminuric retinitis,”9 has traditionally been referred to as a spectrum of “retinal vascular signs” caused by elevated blood pressure.1

These signs include focal and generalized signs occurring consequent to initially physiological autoregulation of the vasculature. However, they subsequently relate to breakdown of the autoregulation pathways due to modulation in the dynamics of perfusion pressure and precapillary arterioles by endothelial-derived molecules (endothelins, thromboxane A2, prostaglandins, and nitric oxide).1,2 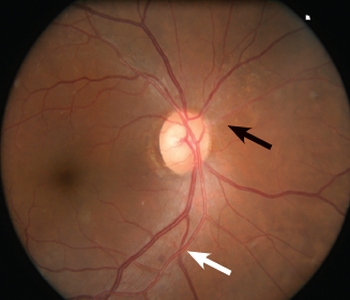 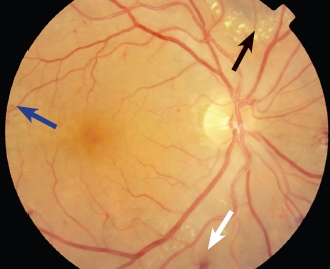 Retinal arteriolar narrowing or attenuation is a defining sign of hypertensive retinopathy and is considered to be an autoregulatory physiological response to initial vasospasm of retinal arterioles. This sign appears even in children with hypertension.10

If an individual’s blood pressure remains chronically elevated, the pathological process of arteriolosclerosis sets in, and the changes are generally irreversible. These permanent changes cause opacification of the arteriolar wall, sometimes known as “silver” or “copper” wiring, with consequent compression of venules due to atherosclerotic arteriolar changes, leading to arteriovenous nicking (AVN)11 (Figure 1).

Uncontrolled severe hypertension can lead to a “malignant” stage, with optic disc and macular edema due to raised intracranial pressure. This stage is associated with poor prognosis for survival.11

We present these pathophysiological changes and clinical features in detail in Table 1.

However, the usefulness of this classification in routine practice is questionable.15-19 Three major limitations exist. First, the classification has poor reliability and reproducibility among clinicians, particularly in distinguishing between the two lower grades of KWB retinopathy (grade 1 vs grade 2).20

Second, the KWB retinopathy grades do not correlate with severity of hypertension.21,22 Third, some researchers have interpreted the KWB grades as sequential in nature, but patients may have higher grades (grade 3) without going through lower grades of retinopathy (grade 1).

Finally, no good prospective studies have emerged to demonstrate that these four grades of retinopathy correlate with prognosis, cardiovascular events, and mortality. It is not clear, for example, that patients with KWB grade 2 retinopathy are at greater risk than patients with grade 1 retinopathy.

Three major advances have occurred in research in hypertensive retinopathy over the past two decades. The first advance has been the broad application of retinal photography (initial film and subsequently digital) to capture hypertensive retinopathy signs in clinical studies. As a result, elements of reproducibility in measuring early signs are no longer necessary.

The second advance is the application of computer-based techniques to measure early changes, such as generalized retinal arteriolar narrowing. These techniques have allowed the third major advance: improved understanding of the relationship of these signs in large epidemiological studies with systemic conditions and target end organ damage, such as cerebrovascular, coronary, and renal diseases.

As a result of this new understanding, we proposed a three-grade classification scheme (“simplified classification”),2 based on the strength of reported associations between hypertensive retinopathy and cardiovascular diseases, as well as target end organ damage (Table 2).

Over the past decade, substantial population-based studies have evaluated hypertensive retinopathy based on retinal photography (Table 3).4,10,24-33

Data from these population-based epidemiological studies indicate that hypertensive retinopathy signs frequently occur in 3% to 14% of nondiabetic adults age 40 years and older.

Among the different retinal signs, focal arteriolar narrowing and AVN occur in 7% to 12% of hypertensive people, respectively, and the most common retinopathy lesions observed are isolated retinal hemorrhages or microaneurysms (3%-17%), with cotton wool spots being relatively uncommon (0.3%). The 10-year cumulative incidence of these retinopathy signs is 16%.34

According to the computer-assisted programs used in the Atherosclerosis Risk in Communities study, major systemic determinants of narrower arteriolar caliber included past and current higher blood pressure. However, wider venular caliber was only associated with current hypertension.37

In a recent follow-up report of the Beaver Dam Eye Study, narrower retinal arteriolar and venular caliber was independently associated with past and current blood pressure.38

RELATIONSHIP WITH OTHER RISK MARKERS

Some evidence also exists for a genetic influence on hypertensive retinopathy changes. A twin study of retinal vascular caliber reported that the heritabilities of retinal arteriolar and venular calibers were 70% and 83%, respectively.50

Genome-wide linkage studies found that the regions for retinal vascular caliber overlapped with those that were previously associated with essential hypertension, coronary heart disease, and vasculogenesis.5

The significance of these risk factors’ associations with hypertensive retinopathy, however, remains unclear,25 warranting further investigation.

For example, computer-based methods for measuring retinal vascular caliber (Figure 3) have allowed studies to demonstrate that retinal arteriolar caliber is strongly associated with current, past, and future levels of blood pressure, in both adults and children.6 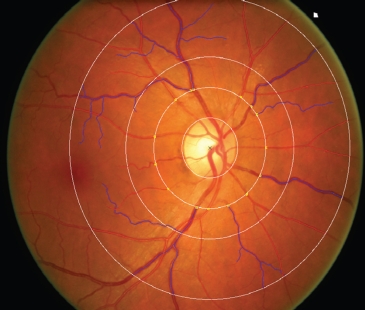 Normotensive people also demonstrate these retinal vascular changes in various ethnic groups, so they may prove useful in predicting future risk of hypertension and cardiovascular diseases.57

Further technological advancements in retinal imaging have allowed for the evaluation of dynamic retinal vascular flow and remodeling, via tools such as the dynamic vessel analyzer and scanning laser Doppler flowmetry.

Innovative retinal imaging tools, such as ultrawide-field retinal imaging, adaptive optics, retinal oximetry, and Doppler optical coherence tomography, have emerged recently to evaluate in advance the link between the eye and hypertension.6

In the Atherosclerosis Risk in Communities (ARIC) study, subjects with hypertensive retinopathy were not only at an increased risk of developing incident stroke,58,59 but also cognitive decline,60 cerebral white matter lesions,59 and cerebral atrophy,61 even after controlling for traditional risk factors.

A recent report on a follow-up to the ARIC study showed that hypertensive retinopathy predicted the long-term risk of stroke.23 In this study of hypertensive patients with no previous cerebrovascular disease, 5.6% developed stroke, after a mean follow-up period of 13 years.

Incident stroke (19.3% vs 4.3%) and incident cerebral infarction (15.5% vs 3.6%) were significantly more common in people with retinopathy than those without retinopathy.

Even among subjects with hypertension receiving treatment with adequate control of blood pressure, those with mild and moderate retinopathy had cerebral infarction.

The link between hypertensive retinopathy and renal impairment, demonstrated in various cross-sectional studies,66-68 has had more conflicting results.

Retinal arteriolar narrowing was associated with the risk of chronic kidney disease (CKD) and microalbuminuria,69 after adjusting for traditional risk factors in different studies, including the Atherosclerosis Risk in Communities study.70,71

However, the Cardiovascular Health Study found no association between hypertensive retinopathy and CKD among elderly adults.72 In another study, retinal venular caliber was also associated with CKD.73

Patients with moderate hypertensive retinopathy have more than twice the risk of developing congestive heart failure compared to those without retinopathy.75 Other studies have strongly associated retinopathy with coronary artery disease in elderly hypertensives76 and those with markers of subclinical or microvascular coronary disease,77 especially in women with type 1 diabetes.78

Emerging evidence has suggested that the risk for coronary heart disease is greater in women previously considered “low risk” by traditional risk factors.81,82

Other data have indicated that hypertensive subjects exhibit progressive stiffening of the aorta, in parallel with the progression of retinal alterations.84

The management of patients with hypertensive retinopathy should be based on the “simplified classification”2 shown in Table 4. This scheme allows clinicians to utilize retinal microvasculature as a model for assessing hypertensive patients for target organ damage risk stratification.

Newer studies, based on digital retinal photography and computerized analysis, have revealed that blood pressure reduction is associated with a reduction in arteriolar narrowing, widening of arteriolar branch angle, and an increase in arteriolar density among untreated hypertensives.90

It is unclear whether differential effects of antihypertensive therapy exist on retinal signs. Both calcium channel blockers and angiotensin antagonists cause regression of retinal vascular signs to similar extents.90

Nevertheless, in one study comparing them to beta-blockers, calcium antagonists showed a better remodeling response in retinal microvasculature, possibly due to the vasodilatory action of the drug.91

A retinal assessment may be useful to screen for patients with “white coat” or “masked hypertension,” common in 12% to 30% of elderly women.92 This subset represents an intermediate category between normotensives and “real” or sustained hypertensives with regard to target organ damage and cardiovascular risk. Detection of hypertensive retinopathy in subjects with white coat hypertension may indicate the need for antihypertensive therapy.93

In patients with malignant hypertension with optic disc and macular edema, in addition to systemic management of blood pressure, ocular adjuvant treatments that target VEGF reduction have come to the forefront.

These anti-VEGF agents presumably act by reducing vascular permeability, and they reduce macular edema in eyes with malignant hypertension. Although a few anecdotal reports94-96 available in the literature have shown good visual outcomes, the routine use of such therapies warrants further research.

Novel retinal vascular imaging has the potential for noninvasive assessment of the microvascular sequelae of hypertension. While currently confined to research settings, this modality may play a clinical role in the future. RP