Early Vitrectomy for DME: Does It Have a Role?

Sometimes vitrectomy can be first-line treatment. Part 1 of 2.

The microvascular changes that result from diabetes mellitus (retinopathy, nephropathy and neuropathy) result in significant morbidity and high rates of disability. Of these, diabetic retinopathy affects the largest number of individuals (5.3 million in the United States alone) and with sufficient disease duration, will plague nearly all diabetics.

Diabetic macular edema is the major reason for vision loss among diabetics and is the leading cause of vision loss in the working-age population of the industrialized world. Because health-care costs for patients with diabetic retinopathy are 30% higher than those without retinopathy, DME is understandably considered a major public health concern.

The World Health Organization estimated that the number of diabetics will increase from 171 million in 2000 to 366 million by 2030, thus affecting 4.4% of the world’s population.1 Although developing countries currently report lower rates of DR, as their populations age, become more obese, and gain improved access to medical care, these rates are likely to increase.

For the past 30 years, macular laser photocoagulation has been considered the “gold standard” for the treatment of DME. However, because patients with diffuse DME rarely achieve significant improvements in visual acuity, physicians have attempted to improve the results of treatment by first injecting corticosteroids and, more recently, drugs that inhibit the actions of vascular endothelial growth factor into the vitreous cavity.

Unfortunately, these treatments are expensive and require frequent examinations and injections that can go on for years, possibly even indefinitely. This need for long-term treatment increases the chance of an adverse event so that after 20 to 40 injections, the cumulative risk of endophthalmitis approaches or exceeds 1%.2

Manpower projections, moreover, suggest that the number of trained ophthalmologists may be insufficient to care for the increasing number of diabetic patients. Spiraling health-care costs will call into question society’s ability to provide increasingly expensive care.

What physicians and patients both need is a treatment for DME with the following qualities: efficacy, safety, durability, low cost, the need for infrequent examinations, and availability. In response to these needs, this article proposes that pars plana vitrectomy, done early in the course of a case of nonproliferative diabetic retinopathy with vision-compromising DME, may well meet these criteria.

The hallmark of any effective treatment for DME is the ability to promote drying of the retina. This requires the establishment of a favorable physiologic balance by minimizing fluid leakage into the retina (through the retinal vasculature walls and retinal pigment epithelium) without compromising resorption of excess fluid.

Nearly two decades of clinical experience has demonstrated that vitrectomy effectively restores the blood-retinal barrier and significantly thins the macula.

Subsequent surgical series resulted in improved vision in these eyes, leading most surgeons to agree that vitrectomy benefits these patients. However, what should be done for the much larger group of DME patients who do not have taut hyaloids? These are the challenging patients at whom the balance of this article is aimed.

Encouraged by improvement in eyes with taut hyaloids, surgeons began operating on eyes without vitreomacular traction. These were uncontrolled, retrospective series with improvement measured by changes in VA and the clinical appearance of the macula.

Although these reports were encouraging, their primitive study designs and nonquantitative descriptions of macular changes (no OCT measurements), before and after vitrectomy, meant that they simply fulfilled the role of early pilot studies.

Subsequent studies included prospective enrollment, time-domain OCT measurements of the macula, which did not allow for detailed analysis of external limiting membrane and inner segment/outer segment junction, and, finally, the inclusion of control arms. Dozens of reports on the effect of vitrectomy on DME have been published since 2000, and most of them have included OCT data, but only with TD-OCT results.

We performed a Medline search for English-language manuscripts reporting vitrectomy for DME published since 2002. We identified 37 studies (1,881 patients), which we pooled according to study design, length of follow-up, and the performance of previous macular laser photocoagulation (Table).4-40

In aggregate, these studies report excellent thinning of the macula (weighted average change of −187 μm), which compares favorably with that achieved by intravitreal injections of anti-VEGF drugs with or without laser photocoagulation (range: -80 μm to −194 μm).41-44

The rapidity with which vitrectomy resolves DME and the durability of this effect were also very impressive (Figures 1 and 2, page 50). In the several different reports that have been published, macular thinning of −120 μm, or more than half of excessive thickness, has been observed at one week and more than 80% of the excess edema resolves by four weeks.20

Furthermore, studies with follow-ups of at least 12 months reported greater thinning than those with shorter follow-ups. The study with the longest follow-up — up to 170 months (mean of 74 months) — reported no regression after the first year.30 These studies demonstrate that macular edema resolves quickly after vitrectomy and that the effect is long lasting (Figure 3, page 52).

Studies of eyes that had previously received macular laser also demonstrated impressive macular thinning after vitrectomy. This was true for both retrospective (−242 μm) and prospective (−198 μm) studies. In a single-center, comparative, retrospective study, eyes that underwent vitrectomy achieved greater thinning at six months compared to those treated with laser or triamcinolone alone (−92 μm vs −28 μm vs −83 μm).45

Fortunately, modern pars plana vitrectomy for macular conditions provides excellent anatomic and visual results with acceptable safety profiles; even 20-gauge vitrectomy has been reported to result in a 99% success rate for retinal detachments.46

Recently presented vitrectomy studies, with more than 100 cases in each, have reported 100% success rates for 118 cases for macular holes,62 398 cases for visually significant floaters,63 and no cases of retinal detachment in 403 cases undergoing vitrectomy for macular pathology.47 None of these surgeons reported any cases of significant, vitrectomy-induced vision loss. 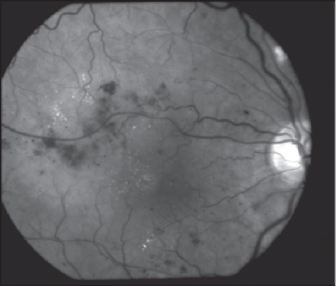 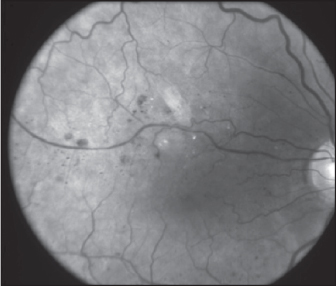 Figure 1. A preoperative photograph (left) shows nonproliferative DR with a large area of thickening in the superior macula. Six months after vitrectomy with ILM removal (right), the image shows resolution of the macular edema and significant regression of the DR. 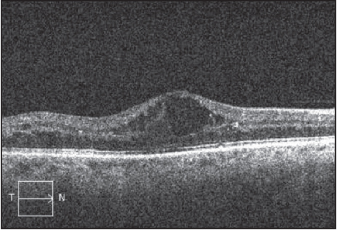 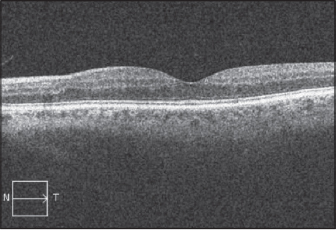 Because vitrectomy removes the scafold (cortical vitreous and ILM) onto which neovascularization grows, it may mask progressive ischemia and divert neovascularization to the vitreous base and anterior segment.49 In the 37 studies of vitrectomy for DME that we reviewed, however, there was little mention of rubeosis irides as a complicating factor.

This excellent safety profile appears to extend to vitrectomy for DME, although sight-threatening complications have been reported. The incidence of retinal tears during vitrectomy for DME ranges from 9% to 36%, but these cases did not affect final VA. Postoperative retinal detachments were reported in 13 of 1,881 eyes (0.7%), and most were repaired without adverse sequellae.

Postoperative growth of epimacular membranes has been seen in up to 36% of eyes that did not undergo ILM removal, and a few cases of vitreous hemorrhages have been described after ILM peeling.50 These complications are manageable, and the incidence of surgically induced vision loss was miniscule.

The treatment of patients with DME currently lasts for years and incurs high costs, particularly during the first few years. Although the average number of ranibizumab injections in long-term trials appears to decrease during years 2 (3 to 3.7) and 3 (2 to 2.7),51,52 patients still must have regular exams and imaging.

Published cost analyses have examined the one-year costs but have not yet evaluated the longer-term costs. Comparing the costs of different treatment strategies is complex, particularly if one attempts to correlate these costs with the amount of vision gained.

Using Medicare-allowable charges, however, the authors calculated the costs of one year of initial therapy. Monthly ranibizumab therapy was most expensive ($17,764), whereas monthly bevacizumab ($4,325) and vitrectomy ($5,402) were considerably less expensive (Table, page 47).

This discussion addresses only the direct costs of DME care, but the frequent clinic visits required by an anti-VEGF treatment regimen carry additional, significant indirect costs. Travel costs to and from the doctor’s oice have not been calculated, and productivity loss accrues due to time away from work for both the patient and those individuals accompanying him or her.

Although vitrectomy consistently decreases macular edema in DME cases, significant visual improvement has, thus far, been much less common. This may well be the result of the vitrectomies in essentially all of these studies only having been done as a “last-ditch” procedure, after all other forms of treatment had failed. Very possibly, significant, permanent damage had already been done to the retina.

Some authors believe that the timing of vitrectomy may be an important determinant of final VA and that early vitrectomy, relative to the duration of DME, yields better visual results.20 Delaying the institution of therapy for other exudative maculopathies (branch RVO, exudative AMD) by 21 to 24 weeks results in poorer long-term VA.53,54

Following vitrectomy, macular thinning occurs quickly (with many studies demonstrating more than 100 μm by the one-month postoperative exam), although the rapidity of VA improvement is not well documented in the literature. Some studies have shown that VA improvement does not correlate well with thinning of the macula because many eyes experience thinning without visual improvement.55 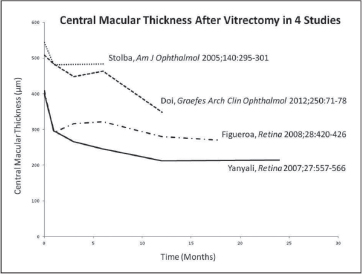 Unfortunately, these and most other studies have lacked good morphological predictors of visual improvement. Thus, it appears that macular thinning is necessary for, but not always sufficient to cause, improvement in VA. Other as yet poorly understood factors may limit visual recovery after vitrectomy. These may include photoreceptor damage, disruption at the IS/OS junction, and bipolar cell dysfunction.

Studies have suggested that disruption of the ELM and/or IS/OS junction, possibly combined with preoperative macular thickness, is the strongest predictor of postoperative VA.16,26,34

The idea that vitrectomy thins the retina in eyes with DME is based on work from Duke in the early 1980s.56-58 Animal studies have shown that removing the vitreous and replacing it with saline improved the difusion of molecules, including oxygen, throughout the vitreous cavity by several fold.59

Although the exact mechanism responsible for these differences is not known, the presence of highly oxygenated preretinal aqueous, as discovered in these early vitrectomy experiments, is a plausible explanation.

Neither these early studies nor the subsequent series describing vitrectomy for DME, however, described the amount of vitreous removal necessary to increase the circulation of oxygen-enriched aqueous to the preretinal space. None of these studies answered the question, “Does a spontaneous vitreous detachment improve the oxygen tension within an ischemic retina?”

We lack sufficient data to answer this question for two reasons. We do not have information regarding changes in intraretinal oxygen concentrations following vitreous detachments. Furthermore, histopathologic studies have shown that spontaneous vitreous detachments are often confused with the development of vitreous schisis cavities in diabetic eyes because some cortical vitreous usually remains adherent to the ILM.

Residual vitreous also remains after the induction of a vitreous detachment during vitrectomy. In many cases, premacular vitreous remnants may limit the diffusion of oxygen into the retina and interfere with VEGF removal from the retina.61 In contrast, thorough removal of the precortical vitreous and careful peeling of the ILM appear to decrease the incidence of postoperative ERM growth.

Taken together, these data suggest that residual vitreous may interfere with the resorption of DME, so consideration should be given to ILM removal during vitrectomy for DME. RP

12. Hernandez-DaMota SE, Chacon-Lara A, Hernandez-Vazquez E. Use of triamcinolone and bevacizumab in 25 ga phaco-vitrectomy surgery for the treatment of cataract and diabetic macular edema. Arch Soc Esp Oftalmol. 2008;83:293-300.

45. Browning DJ, Fraser CM, Powers ME. Comparison of the magnitude and time course of macular thinning induced by different interventions for diabetic macular edema: implications for sequence of application. Ophthalmology. 2006;113:1713-1719.

56. Landers MB, Wolbarsht ML. Rubeosis irides: A rationale for panretinal photocoagulation at the time of vitrectomy in diabetes. Ocutome/Fragmatome Newsletter. 1979;4:1-2.

57. Wolbarsht ML, Landers MB: The rationale of photocoagulation therapy for proliferative diabetic retinopathy. A review and a model. Ophthalmic Surg. 1980;11:235-245.