The evidence suggests that NSAIDs should be avoided in patients with CSC.

Central serous chorioretinopathy is characterized by the development of neurosensory detachment of the macula with or without concurrent retinal pigment epithelial detachments and serofibrinous subretinal exudation.

Studies based on indocyanine green angiography, multifocal electroretinography (MfERG), and spectral-domain OCT have added to the evidence that CSC is essentially a bilateral condition.1-3 Hence, the disease is now more widely considered to be a manifestation of some transient systemic pathology, rather than a purely ocular pathology.

Although stress, prehypertension, type-A personality, and hypercortisolism are well-recognized systemic associations in patients with CSC, its pathogenesis remains poorly understood.

Most patients with acute CSC recover spontaneously with almost complete restoration of visual acuity. Patients in whom the disease persists beyond three to four months and in those with recurrence have much poorer outcomes, due to the development of decompensation of the retinal pigment epithelium

No pharmacological therapy has been shown to be effective in the treatment of CSC. The usefulness of recently reported studies using ketoconazole and the antiglucocorticoid agent mifepristone requires further evaluation.7,8

The most widely studied treatment modality has been laser photocoagulation. Its effectiveness in hastening resolution of the leak is well established. Micropulse laser and photodynamic therapy have also been reported as effective.

With the above background, it is important to remember that inflammation and its mediators do not seem to play any role in the pathogenesis of CSC. However, one study using low-dose aspirin reported lower recurrence of the disease, and the authors hypothesized that the response may be related to lowering of plasminogen activator inhibitor and platelet aggregation.9

In contrast, it has been shown clinically and experimentally that corticosteroids contribute to the development of this disease by sensitizing the choroidal vessels and RPE to endogenous catecholamines. At the cellular level, this may be related to the reported increased expression of beta and alpha-1 adrenergic receptors by corticosteroids.10

The nongenomic effects of corticosteroids on ion channels and neurotransmitter receptors could also be relevant.11 The direct cause-effect relationship has been shown in relation to CSC resulting from corticosteroid intake, as 88% of such patients recover on discontinuation of the drug.

What about the effect of topical NSAIDS on the natural course of CSC? Topical NSAIDs produce their anti-inflammatory effect by inhibiting the cyclo-oxygenases COX-1 and COX-2 and thus reducing prostaglandin production. In the eye, topical NSAIDs are preferred over their systemic counterparts because they achieve higher ocular drug concentrations while having no systemic side effects.

Topical nonsteroidal formulations that are available for ocular use include diclofenac, flubiprofen, ketorolac, nepafenac, and bromfenac. These drugs are FDA-approved for management of ocular surface allergies, intraoperative pupillary miosis, pain, and anterior-segment inflammation following cataract surgery.

None of the formulations mentioned are FDA-approved for the prevention and treatment of cystoid macular edema.12 Nevertheless, there have been several placebo-controlled studies, comparative studies, and case reports showing the safety and efficacy of topical NSAIDS in the treatment of CME of varied etiologies.13 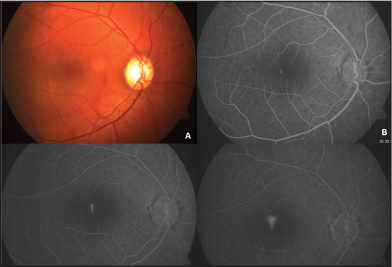 Figure 1. Color fundus photograph (top left ) and angiographic sequence (top right and bottom left and right), showing the evolution of a smokestack leak. This patient denied any stress and was not hypertensive but had been prescribed nepafenac for an inkblot leak detected four months earlier. His BCVA in the involved eye was 6/18.

Reported conditions in which these drugs have been useful include postsurgical macular edema, DME, and macular edema secondary to radiation retinopathy. These results show that topical application of NSAIDS is sufficiently potent to achieve deeper penetration of the drug with resultant effects on the retinal layers.

Several studies have established the presence of prostaglandin activity in the RPE cells, as well as retinal vasculature. 14,15 Prostaglandins have also been reported to affect blood flow in both retinal and choroidal circulation.16 RPE cells express receptors for prostaglandins and also express the mRNA of different cytokine receptors.17 RPE cells have also been shown to produce prostaglandins, and this is said to have a negative regulatory role in RPE cell growth.18

Another possible mechanism by which prostaglandins modulate the activity of RPE cells is by affecting the transepithelial ion flux, similar to the mechanism reported to explain the relationship between corticosteroid use and development of CSC.19

MY EXPERIENCE WITH NSAIDS

Over the years, I have observed that ophthalmologists very often prescribe these easily available NSAIDs in patients with CSC, and I have also noted spontaneous recovery following its withdrawal.

With the widely studied relationship between RPE cells and prostaglandins and the known ability of topical NSAIDs to penetrate deeper into the retinal layers, it is possible that formulations such as topical nepafenac, bromfenac, ketorolac, and flubiprofen may adversely delay or prevent spontaneous recovery from CSC.

Hence, I urge that retina specialists and ophthalmologists exercise caution and desist in prescribing topical NSAIDs in patients diagnosed with CSC. RP

Figure 2 ( SD-OCT image of the above patient, showing neurosensory detachment.