Adding the possibility of imaging the choroid, retina, and vitreous.

Since 1991, when optical coherence tomography was first used to evaluate retinal layers in vivo,1 new technologies have contributed to its evolution. The first available OCT instruments (OCT 1) were based on time-domain (TD) technology and had a resolution of 18 μm.

The third generation of TD-OCT instruments achieved an axial resolution of 10 μm and transverse resolution of 15-20 μm. Some authors attempted to improve the software for better image analysis,2,3 while others tried to use different light sources.4

Ultrahigh-resolution (UHR) OCT, introduced in 2004,5 enabled higher transverse resolutions (5-10 μm) by increasing the diameter of the beam entering the eye, decreasing the spot on the retina. In practice, this task was difficult due to light aberration and diffraction.

UHR-OCT uses adaptive optics, which dynamically adjust their optical characteristics to compensate for monochromatic aberrations that occur naturally in the eye. Unfortunately, due to the narrow depth of focus, it was difficult to obtain good-quality images at different depths simultaneously, eg, the nerve fiber layer and photoreceptors.

Although the system dramatically improved our understanding of macular physiology and pathology, it did have some disadvantages, mainly its high cost, and it never became commercially available.

THE ADVENT OF SD-OCT 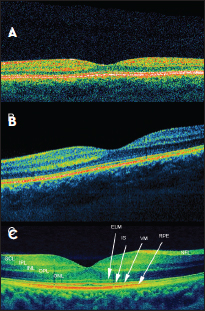 Unlike TD-OCT, SD-OCT does not require a mechanical scan of the optical delay line, as locations of the back-reflecting interfaces are encoded in frequencies of fringes superimposed on the spectrum of the light source. SD-OCT instruments have attained resolutions of 1-3 μm (Figure 1).

For a long time, many believed that it was impossible to visualize structures beneath the retinal pigment epithelium due to signal-attenuating defects and the dense vascular structure of the choroid. Spaide was the first to describe visualization of the choroid after moving the zero-delay line deeper into the eye, effectively focusing the OCT scanner on the choroid instead of the retina.6 This is known as enhanced-depth-imaging (EDI) OCT.

This technique has enabled the visualization of structures lying deeper in the eye. To improve the images, image averaging has been used to achieve high contrast and low speckle noise, resulting in less detailed raster scan images.

Thus, the measurement of several points of the choroid is possible, but current systems cannot reliably create three-dimensional choroid maps because the chorioscleral boundary may not be detected in all cases due to scattering and low penetration through the RPE of the wavelength used. However, some authors have attempted to measure choroidal thickness and volume after manual choroidal segmentation.7

The most recent milestone in the development of retina and choroid visualization strategies is swept-source (SS) OCT, which overcomes the scattering of light on the choroidal vasculature thanks to novel light sources with longer wavelengths than those used in SD systems (1,050 nm vs 840 nm).

SS-OCT obtains time-encoded information by sweeping a narrow bandwidth laser through a broad optical spectrum. SS-OCT detects back-scattered intensity with a photodetector and not with the spectrometer and charge-coupled device camera used in SD-OCT.

Charge-coupled device cameras have a finite pixel size; thus, a drop-off in signal occurs with depth. Using photodetectors instead has led to a further increase in resolution (1 μm). The scan speed in swept-source instruments is twice that of SD-OCT devices (100,000 A scans/sec compared to 50,000 A scans/sec, in general). 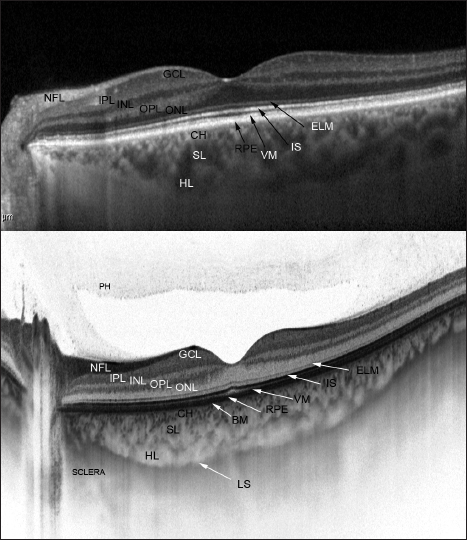 Until quite recently, indocyanine angiography was the only diagnostic tool for the visualization of choroid blood flow, but this is an invasive intervention and can only present blood flow and not histological sections.

The choroid also consists of arteries and veins, melanocytes, and a supportive connective-tissue framework interspersed with a regulatory nervous system. Precapillary arterioles emanate from a central feeder choroidal arteriole, and each supplies an individual choriocapillary lobule. The arterioles enter the lobule centrally, and venules forming the perimeter of the lobular vascular ring drain into the choroidal veins.

The choriocapillaris has fenestrated vascular walls with a relatively large luminal diameter, which enable visualization of leakage in ICG and fluorescein angiography. A normal potential space exists between the choroid and surrounding sclera posteriorly, but only significant pathologic disorders allow for the creation of a space between Bruch’s membrane and the RPE and between the RPE and the overlying sensory retina.

The lamina suprachoroidea is a structure composed of five to 10 layers of pigmented cells interspersed with multiple layers of flattened fibroblastic cells. Previously, only electron microscope studies had revealed the presence of this structure. Now, SS-OCT has enabled us to identify this structure in vivo.

Several investigators have reported that foveal choroidal thickness correlates with age, axial length, or refractive error in normal subjects.8-10 Recently, researchers have paid greater attention to the role of the choroid in various retinal diseases.

The choroid has a major role in retinal blood supply especially to the macula, which, as an avascular zone receiving 100% of its blood supply from the choroid, may be susceptible to subtle choroid alternations.

Choroidal thickness is comparable between EDI-OCT and SS-OCT,11 and several authors have described choroidal details seen with EDI-OCT. However, SS-OCT is a new diagnostic tool and requires further study. Here we present the possibilities of high-resolution (1 μm) imaging of the vitreous, retina, and choroid with SS-OCT. 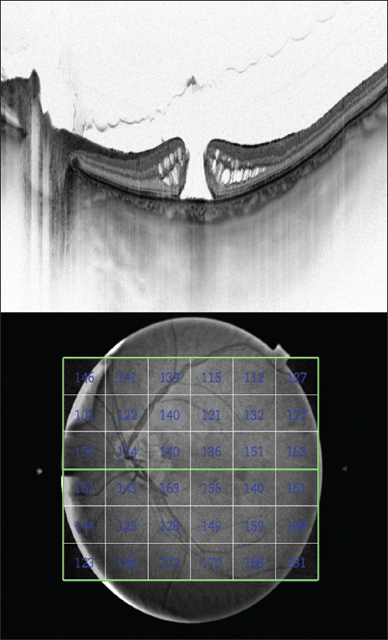 Figure 3. SS-OCT of an eye with idiopathic macular hole (top); and a choroidalthickness map (bottom). 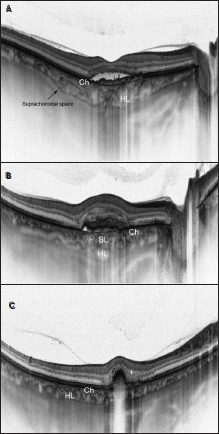 An interesting finding is that choroidal thickness is also increased in eyes with spontaneous resolution of the disease. This might explain the tendency for recurrences, typical in eyes with CSC.

Another interesting finding is that additional increases in choroidal thickness have been found at sites corresponding to the leakage seen in FA. This may correspond to increased vessel permeability due to locally increased hydrostatic pressure. The cause is pigment epithelium detachment and finally RPE defects.

Anti-VEGF drugs were a giant step forward in the treatment of patients with wet AMD, which remains the leading cause of legally defined blindness in developed countries.15,16 However, although these treatments yield impressive results in the short term, they do not prevent RPE atrophy and degeneration over the long term.

Choroidal circulation has an important role in the pathophysiology of AMD. ICG enabled visualization of hypoperfusion in eyes with wet AMD.17 EDI-OCT confirmed that choroidal thickness is decreased in eyes with neovascular AMD and that after anti-VEGF treatment, choroidal thickness further decreased. SS-OCT has allowed us to confirm those findings.

The question remains as to whether this is the natural course of the disease, which is not stopped with anti-VEGF drugs, or a result of using these drugs. Additionally, with SS-OCT, we observed that the thickness of Haller’s layer is increased in eyes with early exudative AMD, probably because hydrostatic pressure is elevated due to increased vessel permeability (Figure 4a).

With time and progression of the disease, an overall decrease in choroidal thickness may be observed. Sattler’s layer becomes almost invisible, and Haller’s layer and the choriocapillaries are atrophic (Figures 4b and c).

Swept-source OCT may be an even more promising tool than EDI-OCT, as it measures the exact size of the nevus, thus enabling early detection of growth, which is one of the factors enabling early diagnosis of melanoma (Figure 5).

Enhanced-depth-imaging and SS-OCT can additionally identify subretinal fluid more precisely than OCT and ultrasonography. Subretinal fluid was described as a predictor of melanocytic activity.19

New findings have allowed us to hypothesize that disturbed blood flow may be a contributing factor for susceptibility of the fovea to traction. Nevertheless, controversies exist regarding choroidal thickness measured with EDI-OCT.

Reibaldi et al. and Zeng et al. reported reduced choroidal thickness in cases of idiopathic macular holes and also in fellow unaffected eyes.20,21 In contrast, Schall and coworkers denied this finding.22 These different findings may be due to EDI-OCT only allowing us to take manual measurements of choroid thickness at several points, as it cannot create choroid thickness maps.

Our group recently reported alterations in the outer retina preceding macular hole formation,23 which may develop secondary to choroid dysfunction and not only in correlation with vitreomacular traction. We also confirmed reduced blood flow with a retina flow-meter in cases of idiopathic macular holes (Figure 3).24 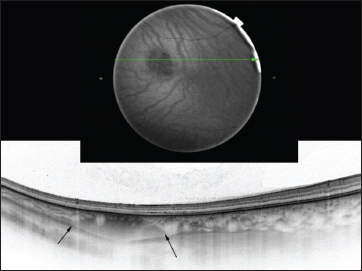 High myopia is known to be associated with several fovea disorders, such as retinoschisis, macular hole, and neovascularization. With the exception of retinal pigmentary changes around the optic nerve disc, most optic disc changes have not been widely addressed.

In a little more than two decades, OCT technology has progressed to the point at which we can visualize the retinal anatomy with a precision not seen before. Swept-source and EDI-OCT allow us to obtain information about the vitreoretinal structures that can guide treatment in common retinal diseases, such as AMD, as well as pathologic myopia and choroidal nevi. With enhanced ability to image the choroid, retina, and vitreous, our diagnostic capabilities are greater than ever. RP