The management of intraocular foreign bodies requires a synthesis of multiple considerations. These include the setting (time, place, mechanism) of the injury, the presence or absence of endophthalmitis at presentation, the location of the injury and associated manifestations, extraocular injuries sustained at the time of injury and systemic status, and postoperative considerations, including anticipated need for future surgery and possible postoperative complications.1

In addition to causing mechanical trauma and potentially introducing infection to the eye, foreign bodies that penetrate or perforate the globe may introduce toxic effects on ocular structures.

After an injury, the wound should be closed as soon as possible; systemic and topical antibiotics and tetanus prophylaxis should be administered. Unless the patient presents with endophthalmitis (which dictates immediate foreign body removal), controversy persists regarding the timing of removal of the intraocular foreign body.2

Those who advocate immediate removal of the intraocular foreign body cite the potential advantages of a decreased rate of proliferative vitreoretinopathy and endophthalmitis compared to delayed surgery, with the efficiency of taking care of the situation with a single procedure.3

Those who advocate delayed removal allude to the advantages of decreased bleeding compared to immediate surgery. They point out that the time interval between the event and surgery often allows for spontaneous separation of the posterior vitreous cortex, aiding in complete removal of the vitreous scaffold, which could potentially buttress PVR tissue.4 Immediate administration of intravitreal antibiotics may allow for delayed removal of intraocular foreign bodies.

Here, we are fortunate to have comments from Tim B. Hopkins, MD, a retina and ocular trauma surgeon and assistant professor of surgery at the F. Edward Hebért School of Medicine, Uniformed Service University of the Health Sciences, and from Marcus Coyer, MD, assistant professor and retina surgeon, Uniformed Services University of the Health Sciences and Walter Reed National Military Medical Center in Bethesda, MD.

I have seen a significant number of wounded warriors returning with severe ocular and adnexal trauma, which oftentimes includes IOFBs. Unfortunately, most of the ocular injuries are a result of improvised explosive devices.1 More than one-third involve bilateral ocular injuries.2 When isolating IOFB cases, the bilateral nature increases significantly, as one might expect from the very mechanism of injury.3

These ruptured globes are closed, usually a few hours from the time of injury, by my forward-deployed colleagues. Our troops almost always receive systemic, broad-spectrum antibiotics within the first hour after injury, which are continued until evacuation to the United States. Interestingly, military ophthalmologists have rarely encountered cases of traumatic endophthalmitis, even those with IOFBs.4

Knowing IOFBs represent a significant risk factor for endophthalmitis, military retina surgeons try to remove IOFBs as soon as the patient is stable. However, circumstances beyond our control often delay IOFB removal. During the first few days in the stateside military treatment facility (MTF), a returning wounded warrior has comorbid injuries that threaten life and limb and preclude me from operating on known retained IOFB(s).

My approach to timing IOFB removal, when no other vision threatening pathology is present (eg, retinal detachment) has shifted from urgent to elective. I have found several benefits to elective IOFB removal, among them emotional, physical, and technical factors.

First, in the emotional realm, immediate IOFB removal usually means the patient cannot participate in the decisions. The patient is either unconscious or heavily sedated due to comorbid head/brain trauma, often for weeks. The family is in shock, most often from seeing a much disfigured loved one in an ICU. Delaying the planned isolated (no retinal detachment) IOFB removal often allows the patient to participate in the informed-consent process later on.

Second, I have learned to take advantage of the eye’s healing ability. Having an adequate view to perform a safe vitrectomy and IOFB removal is paramount. I have used both a temporary KPro (Boston Keratoprosthesis, Massachusetts Eye & Ear Infirmary) and endoscope when the axial view was not an option.

Using the temporary KPro means having a cornea surgeon available to assist in the case. My case times are significantly longer for both techniques. The outcomes are commensurate with the severity of the injury.

In contrast, in delayed IOFB removal, I have watched many corneas heal sufficiently to allow me to use a standard noncontact widefield viewing system with shorter operating times. In 10-14 days, choroidal hemorrhages liquefy and drain more easily and completely. The ocular adnexal repairs of colleagues heal, decreasing the chances of wound or graft dehiscence.

Third, the surgery is technically easier, especially with a posterior vitreous detachment, in this population of young people. For me, the ocular endoscope, although I am comfortable using it, has a steep learning curve. It adds a degree of difficulty over a standard noncontact widefield viewing system, which is difficult to quantify. The endoscope is also one more piece of complex equipment that can break, or require attention — a potential distraction in an already nonroutine case

My experience may not directly translate to the civilian setting. However, it supports the practice that primary emergent IOFB removal is not a requirement in cases of good primary closure with early antibiotic treatment.

Intraocular foreign bodies presenting in the military system are unique, given the logistical constraints and evacuation patterns of injured service members.

It is rare for me to examine a patient with an isolated small (2 mm or less) foreign body in the midvitreous. Rather, I receive patients with corneal avulsion injuries, opaque corneas, uveal prolapse, and numerous life-threatening nonocular injuries. In many cases, the injuries are bilateral.

Generally, a patient arrives at our facility three to seven days postinjury. All of the patients have undergone prior exploration and primary globe repair. The majority have nonocular injuries, such as extremity amputations and abdominal injuries.

Given these factors, it is difficult to declare an emergency for the eye condition upon the patient’s arrival, so my predecessors and I at Walter Reed National Military Medical Center (Eric Weichel, John Dick, Jeff Blice, Dave Mazur, Dal Chun, and Tim Hopkins) do not consider the presence of an intraocular foreign body an emergency. Instead, we ensure that patients are on broad-spectrum antibiotics and schedule the patient for surgery on the next regularly available OR date.

When I reach the operating room, I use a 20-gauge approach for most cases. If lens injury is present, I perform pars plana lensectomy, except in rare cases of isolated anterior-chamber foreign bodies. A thorough vitrectomy is accomplished using a wide-angle visualization system. 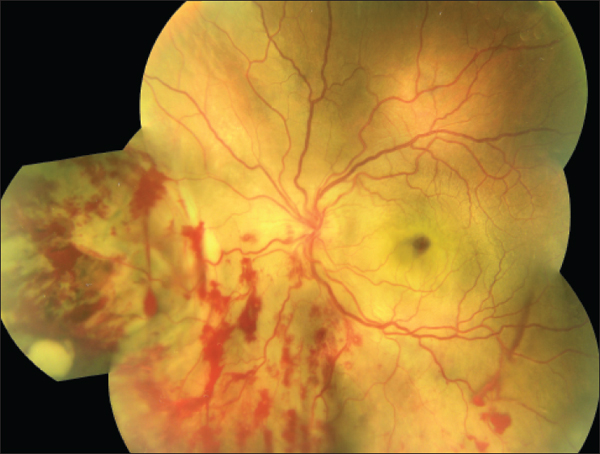 Chorioretinitis sclopetaria is often seen in the setting of ocular trauma.

In many cases, the corneal clarity or injury, or both, degrade to such an extent that I cannot achieve adequate visualization. In these cases, I utilize an endoscopic vitrectomy system to perform the vitrectomy and remove the retained intraocular foreign bodies.

If an entrance or impact wound exists within the vitreous base, I often place a prophylactic encircling buckle, particularly in cases of degraded corneal clarity (it is assumed there will be residual vitreous in these cases and the buckle might reduce anterior loop traction). If a retinal impact site or perforation site are present posteriorly, I attempt to clean/debride any vitreous from the wound. This is often very difficult, if not impossible.

I achieve foreign-body removal through an enlarged sclerotomy in most cases, using Greishaber diamond-dusted forceps or basket forceps. In cases of very large IOFBs, I can create a scleral tunnel and remove them through the anterior chamber.

In most cases, primary IOL implantation is not advantageous. Often, we use gas or silicone oil, as we are concerned about the risk of reoperation and want to minimize surgical times given the nonocular injuries. In isolated cases, such as bilateral injuries or mild trauma, I will consider and have performed primary IOL implantation.

In cases of associated retinal detachment with IOFB injuries, the surgical goals remain the same, but we expedite the timing of surgery. We will use a long-acting gas tamponade vs a silicone oil tamponade, depending on the severity of the trauma, size, and location of retinal breaks, the patient’s ability to position postoperatively, and fellow eye status. RP