Doctors have three choices to create slides for their talks. Which is best for you?

We’ve all been there. It’s the second day of AAO Subspecialty Day at 2:30 in the afternoon. You’re hanging on only long enough to make it to the late breaking session to learn which anti-VEGF therapy is least likely to cause an artherothrombotic event in your patient.

Standing between you and this pearl of wisdom is two hours of ROP and pediatric uveitis. Eight minutes have never gone so slowly.

Giving talks is an art form that bridges the gap between information and entertainment. Success allows your message to “stick” better with your audience, which is the ultimate goal.

As a speaker, it’s your job to communicate your ultimate message effectively and to connect with as many audience members as possible. Although it’s difficult to control your subject matter (and its inner attainment value) or the time slot you’re given, what you can control is the style of your presentation, which can have a dramatic impact.

Your style can be greatly aided by the presentation software that you choose. Fortunately, we now have more than one choice. Physicians are no longer relegated to traditional “yellow text on a blue background” Microsoft PowerPoint slides (although I must admit some of the best talks I’ve ever heard came from speakers using this slide layout; great speakers are great regardless of the format).

Today, presenters have two main choices for presentation software. PowerPoint is still the leader in terms of reliability and ubiquity. The popularity of Apple products has led to a surge in the use of Apple’s Keynote software for medical presentations.

Although there have always been challengers to the big two, Prezi (San Francisco, CA) is the newcomer, offering the greatest “wow effect” and using unique transitions and a free-flowing style that lends itself well to certain presentations.

This article will review these three offerings and look at whom can best benefit from their programs.

Benefits: For one, everyone has PowerPoint. There will never be an issue with running it at a conference or finding someone who has a copy on their laptop. It’s very stable and is compatible with either PC or Mac.

Downsides: It’s not as dynamic as Keynote with regard to transitions and effects. It’s more difficult to manipulate images as stylishly and sometimes videos don’t transition properly.

Best for: PowerPoint is the choice for those who prefer words on their slides (bullet points), for industry talks, and for anyone using a PC. 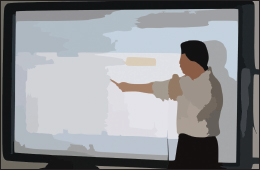 Unfortunately, I can’t impart much first-hand knowledge of PowerPoint; I transitioned to Keynote five or six years ago. In general, PowerPoint is great for slides to utilize words and thoughts (more verbal slides).

PowerPoint can also be made to behave a lot like Keynote when it comes to manipulating photos. However, I’ve found this process requires a fair amount of effort within the program (resizing images seems to take more clicks and effort than with Keynote). In addition, I’ve struggled with embedding videos inside of PowerPoint talks and having them run/export natively from within the file itself.

On the upside, PowerPoint is incredibly robust and has a solid backup strategy, so very little data are lost if the program crashes. In addition, if you’re a PC user, it’s the obvious choice and, in some instances, the only choice, depending on the style of your talk.

If you’re using an Apple, you can purchase a copy of PowerPoint that will run natively on your Mac. A PowerPoint created on a Mac will run on a PC and vice versa without losing anything when transitioning to a different type of computer.

Finally, every conference will have PowerPoint installed on their presentation computers. Most conference IT professionals can troubleshoot PowerPoint easily should disaster arise at the last minute before giving a talk.

Benefits: Compared to PowerPoint, Keynote has better graphics. Video- and photo-heavy presentations seem to run more smoothly. The option also exists to give your talk from an iOS device.

Downsides: Keynote still isn’t available at all meetings, which may require giving your talk from your own laptop. Conversion issues can arise when importing a PowerPoint into Keynote. Slides with images and bullets won’t be as well laid out as with PowerPoint.

Best for: Keynote is best for visually heavy talks (with images, graphics, and videos) and for those who prefer to present visually rather than verbally (more pictures than words on slides).

Keynote is an Apple product and only runs on Macs and iOS devices. These files can only be exported to PowerPoint from Keynote: a Keynote file cannot be opened by PowerPoint unless exported from Keynote as a PowerPoint.

Also, PowerPoint files can be opened by Keynote. However, issues exist with fonts, image cropping, transitions, etc. Although 90% of what you created in Keynote will look fine in PowerPoint, making corrections to the remaining 10% can be maddening.

Keynote has some unique features that seem much more intuitive then PowerPoint. These include:

•  Transitions. Transitions between slides in Keynote can include doorway movements, dissolve, cube, etc. These transitions can spice up a talk, but overuse can become a distraction. My advice is to stick to dissolve, except for an occasional doorway or magic move.

•  Magic move. This transition can be dazzling if used correctly. It allows an object to be moved or zoomed through slide transitions. It’s great for navigating flowcharts or diagrams within a talk or emphasizing areas of pathology.

•  Instant alpha. This feature allows the background of any image to be removed after it’s been imported onto the slide. It can class up any talk that has an object in it.

•  Mask with shape. This feature allows you to give images unique, rounded edges or other unusual shapes.

•  Unique image effects. These include reflection, shadow, and picture frame (which works great for videos).

Using Keynote on the iPad

Many presenters do not realize they can create and give Keynote presentations with any Apple device. All you need is an iOS device, like an iPad or even and iPhone, the Keynote software, and an adapter with which to connect the device to a VGA cable.

Presenting from an iPad or iPhone has a distinct effect. However, it can be difficult to control slides remotely. It can also be a challenge to develop a talk on an iOS device because they are not as powerful or intuitive. Using these devices to type or manipulate images can also be a struggle as can using “copy,” and “find,” features.

Downsides: This software has a steep learning curve and it lacks options for editing or transitioning images.

Best for: Talks that rely on understanding a hierarchy of information. Once one develops the ability to navigate the software, any PowerPoint or Keynote talk will be just as impressive when using Prezi.

Prezi is a Web-based presentation app that has gained a lot of traction and attention in the last six to 12 months. A desktop version is available for download at a moderate cost.

Prezi’s uniqueness is tied to its relatively free structuring of information. It is as if you have an open canvas and can place any content anywhere you like, making any piece of information any size. You can cluster information together or connect your slides through their order. The lack of structure can be helpful if the information is not linear.

However, it is important the content of the talk have discipline and structure. Prezi is more akin to storytelling. A properly organized Keynote or PowerPoint talk will lend itself to being converted into a Prezi.

As noted, the learning curve is steep with Prezi. It takes a while to learn how to get slides and verbiage in the desired order and location. Transitions between slides may be difficult to manipulate.

Finally, Prezi has had issues with crashing, so use caution when creating a Prezi. It does not automatically backup as frequently as PowerPoint and Keynote. Loss of data can be an enormous issue.

One last word of caution: some of the movements that make the software unique can induce motion sickness if overused. My approach to using Prezi is to create my talk in Keynote and then export the slides as images and use those images to create my Prezi.

Choose the software that best matches your speaking style. Do not be afraid to try new presentation software. It can rekindle a spark of creativity with some talks. Finally, try to avoid giving your talk on the afternoon of day two of a meeting.

Part two of this series will focus on “add-on” software that can be used to create better presentations. RP