The Value of Systemic Evaluation for Patients with Choroidal Melanoma

Choroidal melanoma (Figure 1) is associated with a high mortality rate: 18% to 43% of patients with the disease die within 10 years of diagnosis and treatment.1 Death is associated with distant (usually hepatic) metastasis. The highest incidence of metastasis is during the first three years after diagnosis, but metastasis may first be detected years later, prompting the recommendation of periodic systemic evaluations, including annual or semi-annual liver function tests and ultrasonography of the liver, and annual chest X-rays.2 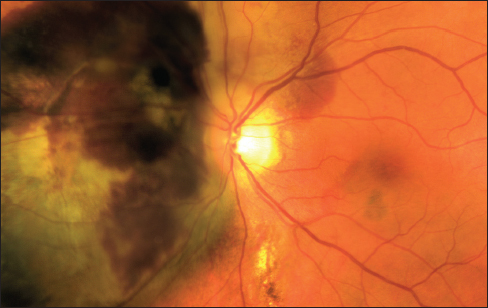 These points may lead one to question the value of systemic evaluation for patients with choroidal melanoma. We are fortunate to have discussion on this topic this month from Carol Shields, MD, associate director and attending surgeon on the Ocular Oncology Service at Wills Eye Hospital and professor of ophthalmology at Thomas Jefferson University, Evangelos Gragoudas, MD, Whitten Professor of Ophthalmology at Harvard Medical School and director of the Retina Service at Massachusetts Eye and Ear Infirmary, and Anne Marie Lane, MPH, a research associate with the Retina Service at MEEI.

Is Genetic Screening Worth the Trouble?

In the management of uveal melanoma, the standard of care has been to monitor patients after treatment on an annual or biannual basis for metastasis. Standard tests include medical evaluations, measurement of liver enzymes evaluation of the screening tools used in both the large tumor and medium tumor clinical trials of the Collaborative Ocular Melanoma Study,1 the investigators found that less than 3% of 11,948 chest X-rays performed were abnormal. As a result, they recommended that radiography only be required at baseline or when triggered by other abnormal test results.

Although the authors acknowledged the limited benefit of liver function tests (LFTs) — the sensitivity and positive predictive value of at least one abnormal LFT were 14.7% and 45.7%, respectively — they recommended that “routine surveillance of LFTs in conjunction with diagnostic imaging studies such as ultrasonography, MRI, or other scans” should continue.

The rationale for completing regular metastatic evaluations is the belief that — as is the case with several other cancers — early detection of and treatment for metastasis will lead to improved survival times. However, despite such monitoring and regardless of treatment for metastasis, improved survival rates in patients with uveal melanoma have not been realized.2 Given these circumstances, many ocular oncologists have begun to question the value of extensive and frequent systemic evaluation for early detection of metastasis.

At the Massachusetts Eye and Ear Infirmary, we compared patients who were diagnosed with metastasis based on annual liver function testing and patients who were diagnosed after developing symptoms, to determine whether longer-term survival was associated with routine surveillance.3 Although differences in mortality were observed in the first year after diagnosis of metastasis in favor of the group diagnosed by routine surveillance, by the second year after metastasis diagnosis, the cumulative rates approached 100% in both groups. More importantly, there was no difference between the groups in median time to metastatic death from diagnosis of the primary tumor, suggesting that any short-term differences were due to lead-time bias.

Consistent with these findings is an extensive review of the available literature regarding the efficacy of surveillance testing for metastasis in patients with uveal melanoma.4 Based upon 31 studies completed between 1980 and 2009, it was concluded that there is no convincing evidence that the currently accepted protocols used for detecting metastasis are beneficial for improving survival.

These findings support a conservative approach to surveillance. At the present time, performing annual LFTs, followed by imaging studies (CAT, MRI, ultrasound) if these tests are abnormal, seems reasonable. Annual monitoring should be done to provide patients with the opportunity to undergo new treatments that may become available.

If there are new clinical trials for which the patients may be eligible, more frequent liver-imaging studies should be performed according to the trial's protocol. The decision to proceed with more extensive evaluations (MRI, PET/CAT scans, questionable liver biopsies) outside of clinical trials must be carefully considered because these evaluations are done at great expense, can cause discomfort and anxiety to the patient, and may be of limited value. Extensive workup for the diagnosis of metastasis should be undertaken only after a detailed discussion with the patient of the risks and benefits.

Behind that Melanoma is a Patient: The Value of Systemic Testing for Choroidal Melanoma

Uveal melanoma carries an ominous prognosis. The 10-year risk for metastasis is approximately 12% for small melanoma, 25% for medium melanoma and 50% for large melanoma.1 Metastases typically occur in the liver and later the lung, skin, bone and other sites.2

At most centers, screening consists of twice-yearly physical examinations and liver function tests, and annual chest radiography and abdominal imaging. There is debate regarding screening for metastasis, as some clinicians believe that therapeutic intervention is of no benefit, whereas others argue that there is a benefit. I believe that screening provides both tangible (physical) and in tangible (psychological) benefits to the patient.

The same applies to genetic testing for uveal melanoma prognosis. Melanoma genetic prognostication by DNA analysis is offered to all patients in our clinical practice. Currently, approximately 70% of patients agree to testing. Genetic testing is obtained following enucleation or by fine needle aspiration biopsy (FNAB) in patients treated by plaque radiotherapy.3

The results of our first 500 cases of FNAB-sampled genetic prognostication revealed disomy 3 (good prognosis) in 48%, partial monosomy 3 (intermediate prognosis) in 27%, and complete monosomy 3 (poor prognosis) in 25%.3 A similar study of 452 patients with choroidal melanoma found remarkably high predictive value of DNA testing, with melanoma-related mortality of 0% for disomy 3, 55% for monosomy 3, and 71% for monosomy 3 plus 8q gain.4

Based on these reports, we can now identify the 25% of patients at high risk for mortality and treat them with neoadjuvant therapy. In contrast, we can reassure 50% of patients, those with disomy 3 melanoma, that they are at low risk for metastasis. They benefit with relief at knowing their lack of risk.

But why perform liver/lung monitoring or genetic testing if we have no cure for the patient? There are several reasons.

First, let's discuss the tangible benefits. There is continued improvement in systemic control of metastatic uveal melanoma. Patients with liver metastasis have prolonged survival with chemoembolization and immunoembolization using intrahepatic artery technique.5,6 No longer do they survive for simply three to four months, but now it is not unusual for these patients to survive one to three years or longer and with fairly good quality of life. This allows the patient precious time with family and friends.

Second, another tangible benefit is that there is exciting ongoing work regarding the pathways that lead to melanoma development.7 This involves tumor evaluation for GNAQ, GNA11, BAP1 and other factors in the MAP kinase pathway. Targeted therapies for pathway abnormalities are available.

For example, a patient with a defect in the MAP kinase pathway might be treated with targeted therapy of 17-allylamino-17-demethoxygeldanamycin (17-AAG). Identification of pathway abnormalities and institution of neoadjuvant therapy could be key in control of micrometastasis.8

Now, let's discuss the intangible benefits. These include the important emotional and psychological aspects. Behind that melanoma is a real person with feelings. Cook et al. studied the psychological aspects of cytogenetic testing for uveal melanoma.9 They found that 97% of patients wanted testing, and no patient regretted having testing. In fact, patients reported feeling they had greater control of their own lives.

Kasparin et al. studied the psychological consequences of genetic testing for cutaneous melanoma.10 Those patients identified as “low risk” were relieved but perceived themselves still at some risk. Those identified as “high risk” accepted the information “calmly,” understood the information and increased precautionary steps to avoid factors leading to cutaneous melanoma development.10 They indicated that testing elicits a complex array of emotional, behavioral, cognitive and familial responses for the patient and family members.

So with an open mind, there are several reasons for uveal melanoma systemic surveillance and genetic prognostic testing. The patient should be offered both. A result indicating high risk would allow for an educated, timely strategic plan for therapy. A result indicating low risk would yield immense relief and forward confidence. This is unquestionably important for the patient's medical and psychological care. Behind that melanoma is a patient. As physicians, we must care for the entire patient.6 RP