Among other findings, reduce-fluence and low-dose PDT look promising.

In the time since my reviews appeared in Retinal Physician in September 2008 and March 2010, continued study of CSC has occurred to guide us in epidemiology /prevention, diagnosis, and management of this disorder. In this update, I will summarize recent findings regarding CSC.

The exudation in CSC is due to hyperpermeability at the retinal pigment epithelium, rather than neovascularization. The hyperpermeable RPE sites are associated with a disruption in the choroidal circulation and choroidal vascular congestion. The cause of the increased choroidal permeability is unknown, but choroidal venous stasis, choroidal ischemia, and inflammation have been proposed to play a role.

CSC can lead to visual impairment: The resultant neurosensory macular detachment yields symptoms of micropsia, metamorphopsia, and reduced visual acuity. Although the majority of cases are self-limited, resolving spontaneously after a number of weeks, some cases will be chronic, lasting six months or longer.

Despite the idiopathic nature of the disease's pathogenesis, it is known that CSC is associated with states of hypercortisolism, such as Cushing's syndrome, pregnancy, and systemic glucocorticoid therapy, as well as following stressful life events.

CSR has a predilection for occurrence in young men (often in those with a “Type A” personality under perceived stress); it presents most frequently as a unilateral disorder. The natural history of CSC includes a several-week period of visual disturbance in the affected eye, followed by spontaneous resolution in the majority of patients. 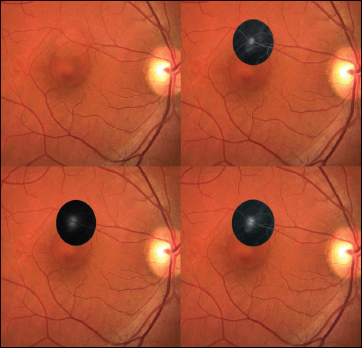 However, the affected patient frequently has high visual demands, and recurrences may be noted in 30% to 50% of patients. Recurrent episodes, especially if they are chronic, can be accompanied by histopathological changes that are associated with irreversible visual loss.

A recent retrospective review of untreated CSC patients followed for three or more years showed that during follow-up, 52% of patients experienced ≥1 episode of CSC recurrence. Also, patients with a history of psychiatric illness (adjustment disorder and depression) were associated with an increased risk of CSC recurrence (hazard ratio = 3.5).3

The occurrence of CSC is potentiated in those predisposed by the administration of steroids. Corticosteroids upregulate transcription and expression of adrenergic receptor genes and may increase the affects of adrenergic stimulation on certain target tissues. Therefore, corticosteroids may cause changes in blood pressure and fluid homeostasis.

Certainly, counseling the CSC patient regarding avoidance of steroids (oral, intravenously, inhaled, intra-articular, and topical) is important. Recently, loss of visual acuity was reported in a patient, associated with CSC following a steroid injection into the shoulder bursa.4

Sympathomimetic agents (such as pseudoephedrine, oxymetazoline, or 3,4-methylenedioxymethamphetamine) may also initiate a CSC episode in a predisposed patient.5

The Raf/MEK/ERK pathway in a cell involves a chain of proteins, beginning at a cell surface receptor, that is involved in cell signaling. This signal chain is stimulated by growth factors, ending in DNA-coded cell division. A mutated protein in the chain can result in “constant-on” signaling, resulting in uncontrolled cell division and cancer.

Patients currently under treatment with MEK/ERK inhibitors should be informed about the possibility of developing CSR and its self-limited nature.6 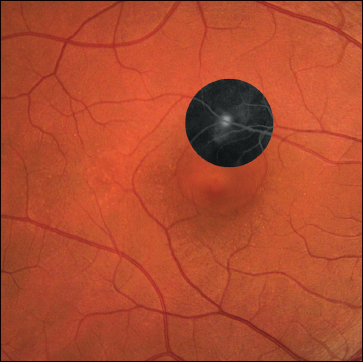 The occurrence of a positive challenge and dechallenge and second challenge seems to implicate PDE-5 inhibitors (used for the treatment of erectile dysfunction) in certain cases of CSC.7

Focal occlusion of the choroidal microcirculation associated with interaction between Helicobacter pylori and the vascular endothelium could explain the mechanism of choroidal ischemia and the development of CSC in H. pylori-infected patients.8

Also, H. pylori urease activates platelets; this activation in the choroid could initiate the choroidal vascular congestion and choroidal ischemia that may lead to CSC.9

Overactivation of the hypothalamic-pituitary-adrenal axis and sympathetic nervous system, seen with the disrupted and poor quality sleep characteristic of obstructive sleep apnea, may contribute to the development of CSC.10 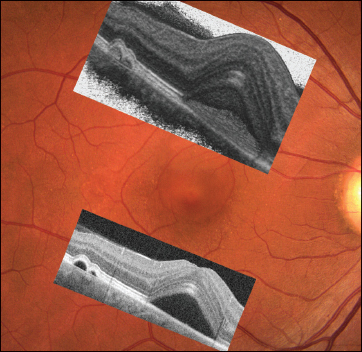 Choroidal thickness has been shown to be related to leakage from the RPE, choroidal vascular hyperpermeability, and punctate hyperfluorescent lesions. These findings provide evidence that CSC may be caused by focally increased hydrostatic pressure in the choroid.11

Enhanced depth imaging (EDI) OCT uses “swept-source” OCT imaging to increase imaging depth resolution; it is useful in studying the choroid. Swept-source OCT uses a wavelength swept laser as the light source. Swept-source OCT in practice can achieve much less loss in sensitivity with increasing imaging depth, as compared with conventional SD-OCT — less than half of what is observed in SD-OCT implementations.

Also, current swept-source OCTs use a longer wavelength, which penetrates deeper within tissue, as compared with the conventional wavelengths used in standard SD-OCT devices.12

Enhanced depth imaging SD-OCT demonstrated a very thick choroid in patients with CSC, consistent with choroidal vascular congestion. This finding provides additional evidence that CSC may be caused by increased hydrostatic pressure in the choroid.13

Macular microperimetry detects decreased macular sensitivity in CSC and may be helpful in determining CSC treatment response to photodynamic therapy. The value of testing macular function by central microperimetry in chronic CSC has been shown.14

These data highlight the value of functional mapping for patients with symptomatic CSC and indicate that visual acuity alone may underestimate the functional benefit of treating this group of patients.15

Recently, fundus autofluorescence (FAF) imaging has been used to study fundus diseases. In normal FAF images, the optic disc and retinal vessels appear dark because of their lack of autofluorescent fluorophores. In eyes with CSC, FAF images tend to show patchy increased autofluorescence in the macular area.

Indocyanine green angiography has demonstrated staining of the inner choroidal vessels, in the mid-stages (approximately 10 minutes after dye injection) of a study, as areas of ICG hyperfluorescence from the posterior pole to the peripheral fundus.18

Multifocal electroretinography (mfERG) may be useful in objectively evaluating the functional changes in central serous chorioretinopathy. Visual acuity and OCT central foveal thickness improvement have been shown to correlate with macular mfERG responses after PDT treatment of CSC.19

In recurrent or persistent cases, treatment varies depending upon the location and nature of the leak. If the lesion is focal and extrafoveal, focal photocoagulation remains popular, but in cases in which the leak is foveal or the leakage pattern is diffuse, PDT has been shown to be beneficial.

Photodynamic therapy may allow for faster resolution of the neurosensory retinal detachment than laser.20 ICG-guided treatment with PDT was first demonstrated to be efficacious by Yannuzzi et al. This ICG angiographically guided treatment works best in patients who exhibit the most intense hyperfluorescence on ICG angiography.21,22 In eyes without hyperfluorescence, another treatment could be explored to absorb the subretinal fluid.23

Photodynamic therapy may be given in the “standard” fluence and dose (the parameters used in treating wet AMD: 83 seconds of 689-nm light wavelength spot at an exposure of 600 mW/cm2, five minutes after a 10-minute infusion of verteporfin dose 6 mg/m2, yielding 50 J/cm2 fluence), in low fluence (“half” that used in the treatment of standard wet AMD: 3 mg/m2 for 42 seconds) or in “half” dose (verteporfin 3 mg/m2 vs standard wet AMD treatment) for the treatment of CSC.

An important consideration is the potential for collateral damage that PDT might cause due to its effect on the choroid and the RPE. PDT may cause further RPE damage in areas with disrupted RPE in eyes with chronic CSC.

Atrophic RPE changes have been noted in areas with previously normal RPE after application of PDT for chronic CSC performed in the same manner as that used to treat wet AMD.24

A shorter irradiation time using the standard dose of verteporfin may be safer for eyes with CSC. Evidence has accumulated that lower PDT fluence and dosage may be beneficial in CSC. A multicenter, retrospective study indicated that half-fluence PDT was as effective as conventional PDT, while minimizing PDT's adverse effects on choriocapillaris perfusion and retinal thickness.25

A recent prospective, longitudinal study evaluated microperimetry data on chronic CSC patients treated with standard-fluence vs low-fluence PDT. The results indicated a significant improvement in macular sensitivity after PDT in eyes with chronic CSC, with greater efficacy in low-fluence-treated eyes.26

A retrospective review of 19 patients over 12 months showed that ICG angiography-guided half-fluence PDT with verteporfin is effective in treating acute symptomatic CSC, resulting in visual improvement and complete resolution of exudative macular detachment.27

Chan and associates modified the PDT protocol by using a half-dose of verteporfin to treat CSC, and no RPE atrophy developed in that study.28

In one interventional case series, half-dose verteporfin PDT in cases of CSC induced significant increases in central 10º, 20º, and paracentral 10º to 20º sensitivity, as well as PDT laser spot area retinal sensitivity, over six months.29

Multifocal electroretinography demonstrated improved retinal function at the central macula in CSC patients after treatment with half-dose verteporfin PDT.19 While treatment of chronic and recurrent CSC appears to be most efficiently performed with PDT, other options to be considered may be on the horizon.

Small case series have shown potential benefit of treating CSC with bevacizumab.31,32 However, another case series showed no beneficial effect of bevacizumab on CSC.33

Finasteride (an inhibitor of dihydrotestosterone synthesis), 5 mg daily, was shown to elicit a positive response in a small series of patients with chronic CSC, with recurrent exudation noted after discontinuance.34

Aspirin has been shown in one study to be beneficial in allowing resolution of CSC.35 The treatment effect may be associated with aspirin's anti-inflammatory and antiplatelet effects, its ability to reduce serum levels of tissue plasminogen activator-1, and its action on inhibiting the hyperfunction of the HPA axis — all potentially beneficial in counteracting choroidal vascular congestion and ischemia and inflammation in CSC.

A dosage of 75 to 100 mg may provide the best activity in this regard because at higher doses, aspirin could have a paradoxical effect of vasoconstriction, predisposing to local and systemic hemorrhagic events.

As glucocorticoids are implicated in the development of CSC, glucocorticoid inhibition with rifampin has been suggested as a potential treatment modality. Rifampin increases the metabolism of endogenous steroids through its induction of the enzyme cytochrome P450,3A4.36

Mifepristone (formerly RU-486) is an antagonist of glucocorticoids and progesterone receptors; it has a weak antiandrogen action. Also, mifepristone inhibits cortisol-induced peripheral vasoconstriction. A treatment response was seen in a group of 16 patients with chronic CSC treated with 200 mg daily mifepristone for 12 weeks; longer-term treatment is most likely necessary in such patients.38

Ketoconazole exerts its potential effects in the treatment of CSC by inhibiting some steps in steroid synthesis, resulting in decreased levels of cortisol, androgen, and aldosterone and in elevated progesterone.39 These effects seem to be present at the minimum dosage of 400 mg/day.

An additional action of ketoconazole is its direct antiglucocorticoid effect as an antagonist at the receptor level. One study indicated a treatment response at eight weeks when a dose of 600 mg daily was given for four weeks.40 Current study on this medication for treatment of CSC is, however, limited by the short follow-up and the number of patients recruited.

Hypothalamic-pituitary-adrenal axis and sympathetic nervous system overactivation, seen with disrupted and poor quality sleep, may contribute to the development of CSC. A case report emphasized the possible importance of identifying and treating obstructive sleep apnea to allow for the resolution of CSC in some individuals.41

A small case series used metronidazole and amoxicillin 500 mg three times daily for two weeks and omeprazole once daily for six weeks as an H. pylori eradication regimen in CSC patients. Compared to a control group that was not given this treatment, the treated patients experienced enhanced absorption of subretinal fluid.42

From 1866, when Graefe first described recurrent central retinitis,43 to 1967, when Gass provided the classic description of the pathogenesis and clinical features of the condition that he called idiopathic central serous choroidopathy,44 to the present, much study and effort continues to be directed toward the understanding and treatment for patients with CSC.

Ongoing efforts include study regarding methods of evaluation, understanding of pathogenesis, and strategies for the treatment and prevention of this disease, which can cause significant short-term and long-term vision loss in affected individuals. RP