The prospect of obtaining functional imaging of posterior segment activity holds much allure for retina specialists, as it could complement our traditional reliance on structural imaging in the form of photography, angiography and OCT. With fundus autofluorescence (FAF) becoming a more affordable and practical option for office-based use, clinicians are rightly wondering how this rough gauge of metabolic activity might augment our patient care efforts.

The major source of FAF is lipofuscin contained within retinal pigment epithelium cells.1 FAF imaging is a unique imaging approach that allows evaluation of abnormal lipofuscin deposition in the RPE cells that may occur with disease in the outer retina and the subretinal space.

FAF imaging offers information distinct from that obtained via fundus photography, fluorescein angiography and optical coherence tomography. Many feel that FAF imaging has been shown to be useful with regard to understanding pathophysiologic processes, differential diagnosis disease analysis, assessment of phenotype and genotype associations, utility for prognostication of disease progression and assessment of new therapies.

The most valuable utility of FAF imaging may be in the evaluation and prognosis in patients with AMD, especially the atrophic form — the total amount of hyperautofluorescence in the macula may be a marker for overall disease activity and risk of progression.3

At this time, FAF is mostly a research tool. However, it is becoming more popular because appropriate camera lens filters are becoming more available, FAF is noninvasive and provides information regarding the health of the RPE.

How useful is FAF for us in the office as an “everyday” utility in clinical practice? Is there enough evidence to show that FAF findings play a role in modifying disease management — or is this modality suited best for research purposes at this time?

This month, Steffen Schmitz-Valckenberg, MD, from the Department of Ophthalmology, University of Bonn, Germany, will discuss the utility of FAF in the clinic.

The Advantages of FAF are Clear

Fundus autofluorescence (Figure 1) imaging allows for the rapid and noninvasive assessment of metabolicchanges at the level of the outer retina and RPE.1 Beyond research applications, FAF imaging is particularly helpful as a screening tool in the clinic to get a fast overview of any pathological alterations in these retinal layers. 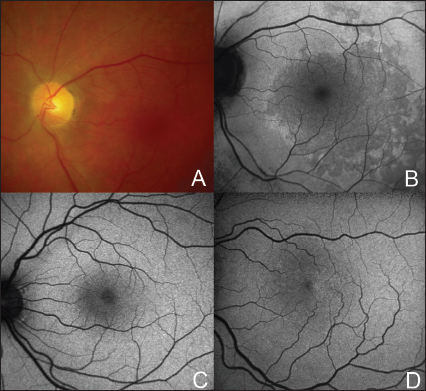 Before sending patients to a time-consuming functional test, such as electrophysiology or visual field testing, I would recommend performing a central FAF scan in any patient being evaluated for unknown visual loss. For example, FAF findings may greatly help to establish the early diagnosis of retinal and macular dystrophies. Compared to other imaging modalities, disease manifestation and the extent of area involved may be more evident. In this context, FAF imaging is also helpful to distinguish AMD from lateonset of macular dystrophies mimicking age-related changes.

The non-invasive nature of FAF imaging is attractive for monitoring patients in the long-term. The ability of FAF to monitor progression of atrophy in nonexudative AMD is a key application.2

FAF findings do have a functional correlation beyond loss of function over areas of atrophy. Relatively increased signal intensities at the border of atrophy in nonexudative AMD correlate with partial retinal dysfunction. In patients with retinitis pigmentosa and cone dystrophies, parafoveal rings of increased FAF have been noted, which tend to shrink or enlarge with disease progression, respectively.3 These rings demarcate areas of preserved photoreceptor function. In retinitis pigmentosa, a gradient loss of sensitivity is present outside the arc of the ring with increasing eccentricity.

In addition to gaining more insight in disease manifestation at the level of the outer retina and RPE, FAF imaging allows for the assessment of macula pigment in the central macula. Here, the signal is usually partially masked by luteal pigment (lutein and zeaxanthin). In children with nonprogressive visual dysfunction, diagnosis of foveal hypoplasia may be established (no or altered macular pigment absorption). In adults, early diagnosis of idiopathic juxtafoveolar retinal telangiectasia type 2a (MacTel) is possible.4 Here, the FAF signal in the central macula is characterized by depletion of macular pigment. It appears that these distinct changes occur before manifest alterations seen by invasive fluorescein angiography.

FAF imaging adds to our armamentarium to diagnose and manage patients. It is a non–time-consuming, easy-to-perform and noninvasive imaging method. Particularly in disorders of the outer retina, the application offers the opportunity to identify disease-related abnormalities and to determine the integrity of the RPE. Notably, it represents not just a technique to visualize structural changes but actually allows for metabolic mapping and correlation with retinal function. Several studies have demonstrated its clinical relevance, and promising future applications are numerous.

Last but not least, FAF imaging should not be regarded as a standalone technique. FAF intensities always must be compared with the clinical exam. For clinicians, FAF imaging becomes even more attractive in combination with other emerging technologies, such as SD-OCT. RP