Comparing Ozurdex and Anti-VEGF for RVO

Retinal vein occlusion is the second most common retinal vascular disease after diabetic retinopathy. Fortunately, we have pharm acologic approaches to counteract the inflammation, cytokines and VEGF factors that play a role in in creasing retinal vascular permeability in patients with venous occlusive disease: the sustained-delivery, bioerodable dexamethasone intravitreal implant (Ozurdex) and monthly intravitreal injections of ranibizumab or bevacizumab. How does a clinician choose between these possibilities? We seek scientific evidence to guide our choices, but to date there has been no head-to-head study comparing these agents.

The first of these trials, the COMO study in Europe and Israel, began enrollment of approximately 400 patients this summer. Dexamethasone implants will be given at baseline, month 5 and month 10 if needed vs monthly ranibizumab injections for six months and as needed monthly through month 12. Patients will be followed for 12 months; the primary endpoint will be mean change from baseline BCVA at 12 months.

The BRAVO, CRUISE and GENEVA trials are three studies demonstrating great efficacy of these agents (especially ranibizumab), but they cannot serve as comparative studies. For instance, the BRAVO and CRUISE (ranibizumab) studies included patients (overall) who had a more recent onset of macular edema (more than half had a short duration) than the patients in the GENEVA study (more than 80% had macular edema for a duration >90 days); subgroup analysis of patients with short duration (<90 days) of macular edema in the GENEVA dexamethasone study gave VA improvement results (48% gaining >15 ETDRS letters at 270 days) that approached the improvement seen in the BRAVO (61% at 6 months) and CRUISE (50% at 12 months) studies.

Ozurdex provides stable drug levels in vitrectomized eyes, as opposed to the rapid clearance seen for ranibizumab in that setting, so such eyes may be one scenario in which there may be a clear preference at this time. What about other scenarios? We will examine that question this month. 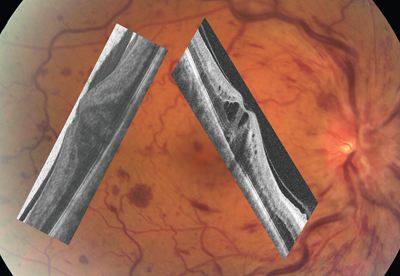 Anti-VEGF agents and the Ozurdex dexamethasone (DEX) implant are reasonable options for treat ment of patients with CRVO or BRVO that are not mutually exclusive, but choices must be made based on relative benefit/risk ratios as to which option will be the first-line treatment and which will take an adjunctive role.

The results of the CRUISE study demonstrate that intraocular injections of ranibizumab provide excellent efficacy with little risk in patients with CRVO (Table 1).1,2 The effects of ranibizumab in BRVO were equally impressive (Table 2).3,4 These benefits are remarkable and were completely maintained through one year by six additional months of injections as needed for recurrent edema. 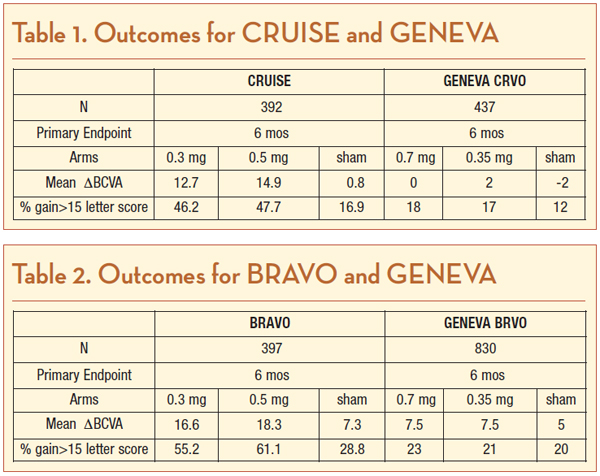 The GENEVA trials were two phase 3 studies with an unusual and problematic design that included both BRVO and CRVO patients in the same population.5 While CRVO and BRVO are related, the natural history of BRVO is substantially better, making the results difficult to interpret.

The subgroup analyses examining BRVO and CRVO groups separately provided the information most relevant to patient care. Injection of either a 0.7-mg or 0.35-mg DEX implant showed no efficacy in patients with CRVO (Table 1) or BRVO (Table 2) at six months. Thus, ranibizumab injections are clearly superior to injections of DEX implants every six months. However, both patient populations showed some evidence of benefit at earlier time points. The peak effects were seen at two months, and there was substantial drop-off between two and three months (Table 3).

Based on DEX�s shorter-than-anticipated duration of action, it would be useful to know the month 6 efficacy and safety of three injections, each two months apart, but based on the current state of knowledge, ranibizumab is favored for primary therapy.

My recommendation for treatment of CRVO is to give six monthly injections of 0.5 mg ranibizumab. After six months, it is best to continue monthly follow-up visits, and ranibizumab injections for recurrent edema have been shown to maintain visual benefit to at least one year.2 Some patients continue to have recurrent edema after a year or longer of treatment,6 and we do not yet have information to guide how to manage such patients.

An ongoing clinical trial is investigating whether laser photocoagulation to areas of capillary nonperfusion can reduce the frequency of ranibizumab injections required. Although most patients respond quite well to ranibizumab injections, in rare patients who have substantial residual edema and reduced vision after six monthly injections, it would be reasonable to consider a DEX implant.

The comparative analysis is very similar for patients with BRVO and favors ranibizumab; however, integration of drug treatment with grid laser therapy is an additional consideration. Visual acuity improves rapidly after an injection of ranibizumab, whereas benefit occurs slowly after grid laser therapy, and the presence of intraretinal hemorrhages in the macula often precludes laser for several months. My recommendation for BRVO with macular edema is to give six monthly injections of ranibizumab. This treatment plan has the advantage of causing more rapid clearing of hemorrhages, in addition to improving vision and macular edema.4 Even the small percentage of patients that would have experienced spontaneous improvement obtain benefit from more rapid return of vision.

Macular edema secondary to RVO is a common cause of visual impairment. Several options are available to combat this sight-threatening complication, but the decision as to which treatment modality to utilize can often present challenges.

Although the standard of care years ago was focal/grid laser for branch RVO patients, the advent of intravitreal injections (corticosteroids and anti-VEGF agents) has led to the potential for promising outcomes with fewer ad verse effects from laser.

Numerous case studies have shown that the anti-VEGF agents ranibizumab and bevacizumab can cause regression of macular edema when administered intravitreally. The CRUISE and BRAVO studies have also demonstrated that anti-VEGF agents are efficacious. Their success, however, is transient; retreatment is generally needed every four to six weeks. Furthermore, it has also been suggested that intravitreal anti-VEGF therapy can contribute to macular ischemia, which is often present in patients with retinal vein occlusions and can lead to visual loss.4,6

Corticosteroids have a much broader effect. These agents exhibit anti-inflammatory properties, reduce vascular permeability, decrease fibrin deposition, stabilize endothelial tight junctions and inhibit synthesis of VEGF, prostaglandins and other cytokines. Although dexamethasone is more than three times as potent as triamcinolone acetonide, its half-life in the vitreous is only five to six hours.

Ozurdex, the biodegradable polymer delivery system, allows the potency of dexamethasone to be delivered in sustained release for up to six months. (In our own personal experience, the effects of the implant last three months, on average). The continuous release of dexamethasone provides a consistent level of drug over an extended period, and effectively eliminates the medication peaks and troughs inherent with frequent injections. The longevity of the medication is a tremendous benefit because follow-up visits and the need for repeat intravitreal injections are minimized.

Though the benefits of Ozurdex are many,1-3,7 its side effect profile limits its utility in some patients. We are careful when using Ozurdex in patients with glaucoma or a history of steroid response, given the risk of IOP elevation. We also inform phakic patients of the potential risk of cata ract progression prior to administering Ozurdex. With that said, given its duration and excellent side effect profile and given that Ozurdex does not generally cause macular ischemia, Ozurdex is generally our first-line approach in RVO. In the GENEVA study, it demonstrated efficacy in treating macular edema from vein occlusions with IOP elevation and cataract progression much less than reported with triamcinolone.5

Although both dexamethasone and anti-VEGF agents clearly reduce macular edema in RVO, one cannot definitively compare the CRUISE/BRAVO and GENEVA studies as the inclusion and exclusion criteria for these studies clearly differed. Rather, a head-to-head study would provide definitive evidence of whether the agents alone or in combination would provide superior results. RP