Clinically significant macular edema—this was historically one of the most important, basic and fundamental phrases in fellowship training. Born in the era of the landmark Early Treatment Diabetic Retinopathy Study, it has endured many treatment eras.

As retina specialists, we have long used the three criteria indicating “clinically significant” macular edema (CSME) as important signals to treat our diabetic patients' retinas locally, to protect them from suffering vision loss. CSME, as defined by the ETDRS, exists with any of the following findings upon contact lens biomicroscopic ophthalmoscopy at the slit lamp:

► Retinal thickening within 500 μm of the center of the fovea.

► Hard, yellow exudates within 500 μm of the center of the fovea with adjacent retinal thickening.

► At least one disc area of retinal thick ening, with any part within one disc diameter of the center of the fovea.

In 1987, the ETDRS was the first study to provide a treatment paradigm in diabetic macular edema using laser therapy, to reduce moderate vision loss in patients with CSME by approximately 50%.1

Much has changed since 1987, though. The field of retina has seen dramatic improvements in diagnostic techniques and imaging, and newer medical and surgical treatments are more efficacious and safer.

Optical coherence tomography, generally the preferred diagnostic test to characterize macular anatomy in 2011, determines areas of macular edema with much more precision than our clinical examination with slit-lamp biomicroscopic ophthalmoscopy. OCT allows for micron-resolution crosssectional imaging of the retina, using low-coherence interferometry to produce an image of optical scattering from internal tissue microstructures in a fashion that is comparable to ultrasonic pulse-echo imaging. A correlation between retinal thickness measured by OCT and best-corrected visual acuity has been demonstrated to exist.2 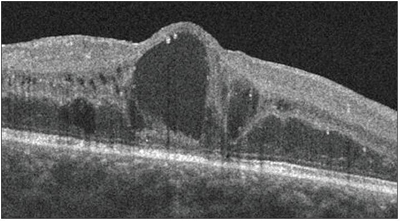 OCT demonstrates the three basic structural changes of the retina from DME: retinal edema, retinal cysts and serous retinal detachment. OCT is not currently required to establish a macular edema diagnosis and is not compelled by practice guidelines; however, OCT has gained popular acceptance as an additional technique to help identify and evaluate macular pathology.3 Quantitative measurement of macular thickness and analysis of the foveal architecture allow for a precise and reproducible way to monitor macular edema.

With OCT, we can now discover areas of subtle macular edema that would have evaded detection with contact lens slit-lamp biomicroscopy alone. Prior to the availability of OCT, these subtle, previously undetectable changes would not have been deemed “clinically significant.” Detection of these regions forces us to make a decision, however: should we initiate treatment “earlier,” before “classic” signs of CSME are noted with contact lens biomicroscopy? If we do, will this result in better outcomes? Or, alternatively, should we monitor more frequently once these changes are seen and hope that improved available systemic care will allow for resolution of these changes, only treating “locally” when classic CSME signs become manifest? Should we have a new, OCT-defined characterization of CSME: “tomographically significant macular edema”?

Clinically significant diabetic macular edema (CSDME) is based on a clinician's subjective assessment of the fundus, using fundus biomicroscopy and/or stereo fundus photography to determine the presence of threshold edema as defined by the ETDRS. Subclinical diabetic macular edema (SCDME) has been typically defined as edema that is recognized clinically but does not rise to the level of being clinically significant and recently, with the advent of OCT, includes patients with intraretinal fluid that is not appreciated clinically.

The important clinical questions that arise are: (1) What is the rate of conversion from subclinical edema to clinically significant edema; (2) How do clinical observations correlate with OCT findings; (3) How quickly will subclinical leakage edema become significant; and (4) Do all patients with subclinical DME require therapeutic intervention?

The gold standard to determine the need for therapy has been clinical assessment. With the advent of OCT, the question of how good clinicians are in identifying retinal thickening compared to OCT has been evaluated. Several studies have addressed this question and have shown a poor correlation between a clinician's assessment of retinal thickening via fundus biomicroscopy and edema identified on OCT, with OCT demonstrating a higher rate of fluid detection.2,3 OCT along with clinical assessment has been shown to be useful in following the progression of SCDME to CSDME.4

The progression of SCDME to CSDME using OCT has been shown to occur in one study in 31.4% of patients over a median of 14 months. There were no OCT characteristics that helped predict who would progress to CSDME. In this study, the authors showed that the median time to treatment was 13 months and that only a small percentage of patients (11%) required treatment within four months of their initial visit. The authors also found that a substantial fraction of individuals with SCDME experienced spontaneous resolution.4

Lastly, studies have explored the use of OCT to define tomographically significant macular edema (TSME),5 but these studies have been limited because they have included only central macular thickness (CMT) readings, and therefore, they are not directly comparable to the ETDRS clinical definition, which includes thickening outside the central subfield.

Thresholds have been suggested for TSME that take into account only the CMT reading using TDOCT. It has been recommended that, with a CMT ≤250 µm, no treatment be instituted and that CMT of ≥300 µm should be considered for focal laser.6

In conclusion, OCT has become the norm in assessing retinal thickening in diabetic patients. Patients with SCDME on OCT do not need imme diate therapeutic intervention and can be safely monitored on a four-month schedule for the development of CSDME. Treatment of OCT-defined SCDME, based on our current knowledge, is not recommended.

OCT Evaluation is the New CSME

Optical coherence tomography was first used in 1993 as an imaging modality that provided an “optical biopsy” of the human retina.1 Since that time, the speed, resolution, three-dimensional imaging capability and image registration of this technology have led to its popularity and widespread usage as a valuable modality to examine the macula.

Diabetic macular edema is an important cause of visual impairment in patients with diabetic retinopathy.2 Prior to the OCT era, the decision to treat was based on the criteria of clinically significant macular edema, as defined by the ETDRS protocol in 1987.3 This classification scheme includes the location and transverse area of retinal thickening but not axial thickening. The amount of axial retinal thickening, more than any other measured variable, has been shown to correlate with visual acuity in DME.4

The fact that OCT measures axial retinal thickening, or central retinal thickness, in a standardized, objective manner helps to explain the usefulness of this imaging modality in the management of DME. Sadda et al. developed a software algorithm for the Stratus OCT to detect CSME that correlated well with clinical grading and standard OCT analysis.5

OCT has been shown to compare well with the historical gold standard tests—fundus stereophotography or biomicroscopy—in the diagnosis of DME,6 and in clinical practice, DME is often demonstrated on OCT when it cannot be appreciated on fundus examination.

OCT is also useful in evaluating changes in DME over time and in response to treatment. In fact, OCT measurements may be a more sensitive indicator of changes in retinal thickness, when compared with fundus photography.7

OCT is likely the most commonly used imaging modality in the management of DME, as it provides important information on the axial retinal thickness, can demonstrate retinal edema that is not appreciated on clinical examination and fundus photography, and can provide objective and quantitative information about response to treatment. OCT assessment may lead to earlier diagnosis and potential treatment of DME, compared to the traditional ETDRS protocol.

Is “tomographically significant macular edema,” or edema appreciated on OCT, the new CSME? There is evidence of a paradigm shift. Numerous recent studies have used mildly increased central retinal thickness in diabetic patients, along with visual acuity, as a treatment criterion, especially when assessing the efficacy of anti-VEGF therapy.8 In these studies, CSME has been neither an inclusion criterion nor an outcome measure.

Earlier diagnosis of DME with OCT imaging could translate into closer monitoring, more intensive systemic diabetes management, and earlier or more frequent ocular treatment of DME, which may be associated with beneficial visual outcomes. RP