Diagnostic considerations and a case study.

Angioid streaks represent a rare ophthalmic condition that has very specific ophthalmoscopic features but is caused by different etiologies. This interesting condition draws our attention because it requires good history-taking and because it sometimes requires a great deal of workup to determine the cause, despite 50% of cases being idiopathic.

In 1889, Robert W. Doyne, MD, was the first person to describe angioid streaks. He reported the case of a man who had received injuries to both eyes: “In all directions throughout the choroid of both eyes, especially around the discs, are irregular, jagged lines, nearly all deeply pigmented … The irregularities and jags in their outline exactly correspond in most places and are probably due to rupture of the pigment layer of the retina.”1

The name “angioid streaks” was coined in 1892 by Herman J. Knapp, MD, a German-born American ophthalmologist, as “the conversion of extravasated blood into streaks of dark brown or black pigment in the retina.”2 Subsequently, in 1929 Groenblad and Strandberg independently related the occurrence of angioid streaks to pseudoxanthoma elasticum (PXE).3,5

APPROACHING A PATIENT WITH ANGIOID STREAKS

Most of the time, the initial diagnosis of an abnormal macula or of optic disc changes is made during a routine ophthalmoscopic examination of the eye, based on patient complaints of metamorphopsia or reduced vision. In addition, in certain cases in which the family history is positive for angioid streaks, a screening examination will reveal the presence of the characteristic signs of the disease. After making the initial diagnosis of angioid streaks by ophthalmoscopic examination of the posterior pole, we must determine whether this condition is associated with a systemic disease that the patient and family will need to be aware of or that may need to be treated.

Certain ophthalmoscopic findings are seen mostly in patients with angioid streaks. At times, angioid streaks can be difficult to identify unless a careful examination of the posterior pole is performed, especially the peripapillary area. Angioid streaks usually present as linear gray or dark red lines, with irregularly serrated edges lying beneath normal retinal blood vessels. The streaks intercommunicate in a ringlike fashion around the optic disc in 27% of cases and radiate outward in a tapering fashion from the peripapillary area in 73% of patients. The streaks run a convoluted course and tend to terminate abruptly. Angioid streaks usually do not extend past the equator.11,12

Other associated findings in patients with angioid streaks may include peau d'orange or leopard-skin spotting, consisting of speckled yellowish mottling of the posterior pole mostly apparent in the temporal macula. This finding may antedate the appearance of angioid streaks. It is seen more frequently in patients with PXE and is caused by alterations at the level of Bruch's membrane, as demonstrated by the diffuse pattern of hyperfluorescence seen on indocyanine green angiography.

In addition, peripapillary chorioretinal atrophy, focal pe ripheral chorioretinal scars (salmon spots), and reticular pigment dystrophy of the macula may be present at the time of diagnosis. Optic nerve head drusen (hyaline bodies) may antedate the appearance of angioid streaks, and they may be the earliest clinical manifestations of PXE. As many as 25% of patients with angioid streaks have clinical or echographic evidence of disc drusen. These hyaline bodies are associated with neovascularization in the peripapillary area and, in some patients, are associated with acute visual loss due to the effect of pressure on the optic nerve head.

Crystalline bodies are typically seen in the midperipheral fundus or inferior to the optic nerve. They are multiple, round, small and subretinal lesions. Usually, these crystal line bodies cause some atrophy of the retinal pigment epithelium.

Optic atrophy may be seen in patients with Paget's disease of the bone. It cannot be explained solely on the basis of bony compression.6

Severe visual impairment may be caused by one of the following conditions in approximately 70% of cases:4,10

• CNV with subsequent serous and hemorrhagic detachment of the fovea (the most serious complication).
• CNV development, which occurs in 72% to 86% of all patients,7 and once a patient develops CNV in one eye, it becomes bilateral in 50% of cases within 18 months of the initial diagnosis.10
• Choroidal rupture secondary to trivial trauma, with secondary hemorrhage involving the fovea.
• Foveal involvement of a streak with damage to the RPE and choriocapillaris (may result in permanent loss of central visual acuity).

Many times the diagnosis of angioid streaks is a straight-forward one, but in certain cases, when associated with subretinal hemorrhage and scarring, it may be a real challenge.

Pseudoxanthoma elasticum is an uncommon inherited disorder of the connective tissue. It has generalized effects on the elastin fibrils in the dermis, arterial walls, heart, gastrointes tinal tract and Bruch's membrane, resulting in mineralization and deposition of phosphorus.

The four types of inheritance of PXE include two that are autosomal dominant and two that are autosomal recessive. It is the most common systemic disorder associated with angioid streaks. Diagnosing PXE is important because 85% of patients develop ocular involvement, usually after the second decade of life. The combination of PXE and ocular involvement is referred to as Grönblad-Strandberg syndrome.7,12

Histologically, degenerative changes and calcifications of the elastic tissues in the skin and arteries are present. The following systemic findings may help the ophthalmologist confirm the diagnosis of angioid streaks secondary to PXE, as well as address complications.

• Dermatologic findings include yellow papules, “chicken skin” arranged in a linear or reticulate pattern, in plaques over the side of the neck, antecubital fossae, axillae, groin and paraumbilical area.
• Cardiovascular manifestations include accelerated hypertension at an earlier age due to atherosclerosis, which may be related to renovascular disease, premature coronary artery disease, peripheral vascular disease and mitral incompetence.
• Some patients develop genitourinary bleeding as part of PXE.
• Neurologic findings may include cerebrovascular accidents, intracranial aneurysms, and cerebral ischemia.

Paget's disease is a chronic, progressive and, in some cases, inherited disease, characterized by bone deformity. It may be confined to a few bones, or in some patients, it represents a generalized abnormality that gives rise to enlargement of the skull, kyphoscoliosis, deafness and deformities of long bones. However, angioid streaks occur in fewer than 2% of these patients. Osteoclastic activity with an osteoblastic reaction occurs. Although the etiology is unknown, some clinicians believe it is related to a slow virus infection, measles or respiratory syncytial virus. Both male and female patients are affected equally.

• Skin and musculoskeletal — Thin, hyperplastic skin that heals poorly, hyperextensible joints that may predispose to recurrent falls, hydrarthrosis and pseudotumor formation over the elbows and knees.
• Cardiovascular disease — Bleeding diathesis, dissecting aneurysms, spontaneous rupture of large blood vessels and mitral valve prolapse.
• Other — Diaphragmatic hernias and diverticula of the GI and respiratory tracts.

The frequency of angioid streaks increases with age; the rate of occurrence is approximately 1.5% in younger patients and increases to 22% in older patients. Complications, such as AMD and CNV membranes, are uncommon in this sub-group of patients with angioid streaks. In general, CNV membranes and serous detachments of the macula are less common in patients of sub-Saharan African ancestry. 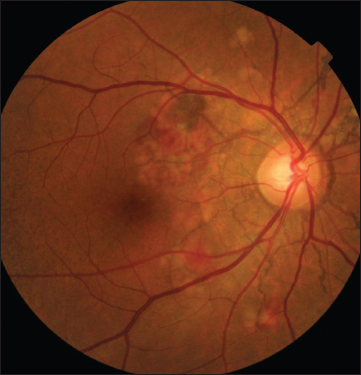 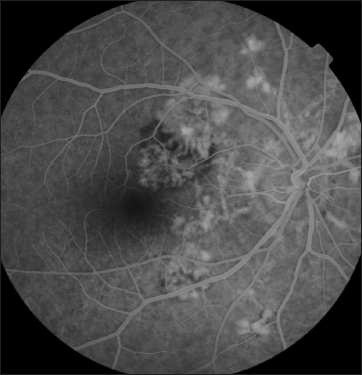 Figure 1b. Late-phase fluorescein angiography showed the extent of the streaks.

The following case study is of a 48-year-old male patient who presented with metamorphosia and reduced vision in the left eye of two months' duration. His visual acuity was 20/20 in the right eye and 20/40 in the left eye. He was asymptomatic all his life, with no family history of similar conditions. 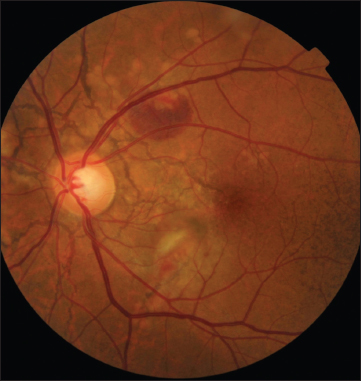 Figure 2a. The left eye showed a similar picture as the right, with one streak involving the center of the fovea. 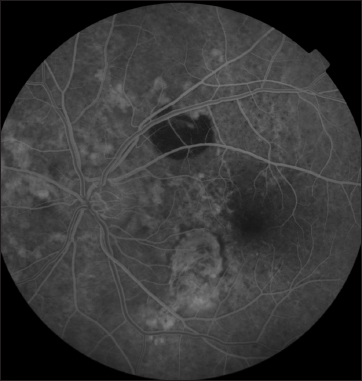 We did an extensive workup for him, and it turned out to be negative for the most common systemic associations.

A color photograph of the patient's right eye (Figure 1a) showed characteristic features of angioid streaks: irregular lines around the peripapillary area with intercommunicating branches. There was a subretinal hemorrhage, over which retinal blood vessels were crossing superionasal to the fovea; there was also a subretinal neovascular membrane that was approaching, but did not involve, the center of the macula. Also, we noticed RPE scarring around the disc and in the nasal macula as well.

Late-phase fluorescein angiography of the same eye (Figure 1b) showed the extent of these angioid streaks, with staining caused by subretinal scarring and a subretinal neovascular membrane within the superior macula.

Color fundus photography of the left eye (Figure 2a) showed a similar picture as above, but we noticed that one streak actually involved the center of the fovea and caused distortion of vision. Inferionasal to the fovea, there was a large subretinal neovascular membrane approaching the fovea. Intravenous midphase fluorescein angiography (Figure 2b) showed a clear subretinal hemorrhage superiorly and a growing subretinal membrane inferionasally.

Angioid streaks are a rare ophthalmic condition with specific ophthalmoscopic features that are caused by many conditions. The basic pathological association among all causes is damage to the elastic lamina of Bruch's membrane. Early diagnosis is important to lessen the severity of vision loss due to CNV membranes or trauma. Patients with angioid streaks are strongly advised to wear polycarbonate eyeglasses and to report for eye exams at regular intervals. RP