“Treat and Extend” Dosing for Wet AMD: Optimal or Daring?

The treatment of choroidal neovascularization in neovascular (“wet”) age-related macular degeneration, the leading cause of vision loss in our ever-expanding mature population, has undergone a paradigm shift over the last decade from laser and photodynamic therapy to pharmacologic approaches with intravitreal injections of anti–vascular endothelial growth factor agents. But what is the best dosing schedule for these patients using the currently available agents?

The ANCHOR (treatment of predominantly classic CNV)1 and MARINA (treatment of minimally classic/occult CNV)2 studies demonstrated that monthly intravitreal 0.5 mg ranibizumab treatments for 24 months were associated with 95% of the participants losing fewer than 15 letters of visual acuity compared to about 60% of the control cohort. In addition, 30% to 40% of participants demonstrated improvements in vision of at least 15 letters (three lines).

Monthly injections, however, may be expensive and practically difficult in this mature patient population.

Nevertheless, monthly intravitreal injections of antiangiogenic agents have been shown more effective than less frequently administered injections for the treatment of wet AMD.

Less frequent anti-VEGF dosing, as undertaken in the PIER study3 (in which patients received quarterly injections after an initial series of three monthly injections), provided results inferior to those obtained in trials using monthly dosing.

Using a different approach, the PrONTO (prospective OCT imaging of patients with neovascular AMD treated with intraocular ranibizumab) study4 attempted to tailor the dosing to the individual needs of the patient based on visual acuity, macular examination, or OCT evidence of exudation. Although this approach was associated with good visual results after a 24-month period, it does require monthly visits, clinical examinations, and OCT testing with patients to determine if or when patients will need retreatment.

Unfortunately, some patients managed with this strategy will return with irreversible vision loss if they have developed macular hemorrhages in the injection-free interval.

So, in clinical practice, how do we optimize current anti-VEGF treatment for our patients? Is TAE optimal — or daring — at this time? In this month's column, Drs. Carl Regillo and John Thompson discuss the benefits, drawbacks and alternatives of treat-and-extend dosing.

The “treat and extend” (TAE) regimen of anti-VEGF therapy for neovascular AMD was first proposed by K. Bailey Freund, MD, in New York City several years ago as an alternative to the traditional as needed (PRN) or “treat and observe” (TAO) style of therapy.1-3 With the TAE approach, there is a treatment rendered at every visit. At first, visits and treatments are frequent, approximately every month or so. Once the macula is dry, the encounters are gradually spread apart by approximately one to two weeks until there is a recurrence. Some clinicians extend out to two months if tolerated, others three months. Few physicians spread the treatment interval out more than that. If there is evidence for recurrent neovascular activity on a given follow-up examination (eg, edema or subretinal fluid on OCT, leakage on angiography, new hemorrhage on ophthalmoscopy, etc.), then the treatment interval is shortened. Ideally, the clinician attempts to find the optimal treatment interval for a given patient in an attempt to keep the macula dry and minimize recurrent neovascular growth or leakage. Theoretically, this should allow for the best possible visual outcome with the fewest number of treatments, examinations, and tests. 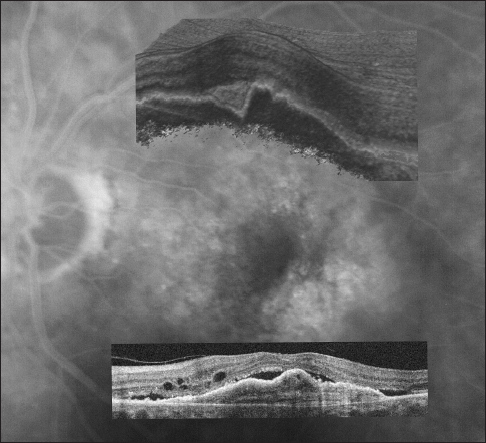 The main potential advantages of TAE over continuous monthly injections such as what was performed in the pivotal phase 3 ranibizumab studies (MARINA and ANCHOR) are greater safety (ocular and systemic), convenience, and cost-effectiveness. The potential advantages of TAE over TAO, if the latter is practiced with monthly follow-up, are greater convenience and less frequent testing. Depending on which drug is used (ranibizumab or bevacizumab) and the mean number of treatments, the overall cost may be more or less with TAE compared with TAO. The potential drawback to any individualized approach or any regimen with less than monthly, continuous dosing whether it is TAE, TAO, every six weeks, or every eight weeks, etc., is lower efficacy.

To date, there are more published studies utilizing TAO types of individualized regimens compared to TAE. With the former, the efficacy results have been variable. Some studies show one-year results that appear comparable to the MARINA and ANCHOR ranibizumab studies, but most do not.4-9 Those TAO studies in which there is a mean number of ranibizumab or bevacizumab injections of between 5.6 and 7.0 treatments in the first year have the best results. Those with a lower mean number of treatments have suboptimal visual outcomes.

With TAE, the visual results have been more consistently good.10-12 Our group on the Retina Service at Wills Eye Institute published results of a retrospective study using ranibizumab to treat neovascular AMD in a TAE fashion that were on par with the phase 3 studies. In that study, there was a mean of eight treatments in the first year and seven in the second year.11 We have also had similarly good results with bevacizumab (unpublished data, Shienbaum et al., ARVO abstract 2010). A more recent study out of Paris retrospectively compared TAO- to TAE-treated groups. The TAE group was found to have significantly better visual outcomes with a mean visual acuity change at one year of 10.8 letters compared to 2.3 letters gained from baseline. The mean number of ranibizumab treatments in the two groups was 7.8 and 5.2, respectively.12

In summary, recently published studies using the TAE style of individualized anti-VEGF therapy by intravitreal injection with either ranibizumab or bevacizumab have shown very favorable visual results. Although there are no prospective comparative trials comparing a continuous, monthly dosing regimen to a TAE regimen at this time, the approach appears to be a reasonable alternative. TAO approaches may also yield good results, but very close monthly follow-up and a relatively high mean number of treatments are needed to yield good visual outcomes.

Although the TAO approach is being put to the test against monthly dosing in several large, prospective, randomized controlled trials, such as the CATT trial, there are no studies under way to date that are comparing the TAE regimen to monthly dosing, and so how the TAE approach stacks up to the gold standard for either ranibizumab or bevacizumab will not be known any time in the near future.

Treat and Extend, or Treat, Extend and Regret?

I have used a modified treat-and-extend protocol with ranibizumab and bevacizumab in my practice and have analyzed the results of constant dosing vs extended dosing. This protocol was developed as a result of observations about my patients in the SAILOR study that used a schedule of three monthly doses followed by PRN dosing and a second phase of the SAILOR study that required only a single dose followed by PRN dosing. I saw recurrences and visual acuity loss in a number of these patients and immediately questioned the wisdom of extended dosing and office visits.

My treatment regimen for bevacizumab was similar, but dosing was given every six weeks for the first year, followed by every three months from months 12-18, and PRN dosing after 18 months since it was my impression that eyes treated with bevacizumab every six weeks fared similarly to eyes treated with ranibizumab every four weeks. Most patients followed this regimen of regular dosing during the first year with extended dosing during the second year. If patients missed visits or refused to continue regular dosing before one year, they were categorized as having extended dosing during that interval.

I analyzed the slope of the visual acuity using multiple linear regression analysis of visual acuity in 165 consecutive eyes. The dosing schedules were defined as follows: The induction phase was the first three doses followed by a regular dosing phase (approximately q4wk for ranibizumab and q6wk for bevacizumab) for the remainder of the first year. During the second year, eyes were treated with extended dosing and office visits (less than every six weeks) as described above. If a recurrence developed, then regular dosing was repeated three times and repeat extended dosing was attempted when the eye was stable.

These data raise the question of how retina specialists can avoid continuing monthly dosing of anti-VEGF agents on all patients with choroidal neovascularization indefinitely. Analysis of individual eyes in the data set confirmed what all retina specialists know: Some eyes remain stable on extended and even PRN dosing of anti-VEGF agents, but recurrences can cause visual acuity loss at any time. It was impossible to predict when choroidal neovascularization would again become active, even using spectral-domain OCT in most of the eyes on extended dosing. When recurrence develops, the baseline visual acuity may not be regained with regular dosing.

Visual acuity is an important factor in the decision about whether to chance extended dosing. Eyes with good visual acuities (20/100 or better) are at greatest risk of visually significant (to the patient) vision loss when CNV recurs. These eyes should be followed frequently (no less often than every two months if there is no remaining subretinal or intraretinal fluid) and regular dosing every one to two months is prudent. Eyes with visual acuities ≤20/200 (especially when the fellow eye has better vision) may be treated (and possibly followed) less often as the risk of visually significant vision loss is lower. Eyes with ≤20/200 in the treated eye and even worse visual acuity in the fellow eye may wish to be treated more aggressively.

The risks of extended dosing in anti-VEGF therapy should be discussed with the patient so that they can participate in the decision and assume the risks if they wish to consider extended dosing and visits. Only by factoring all of these considerations can patients be treated optimally for choroidal neovascularization. RP