Another patient is referred to you with a rhegmatogenous retinal detachment. You greet the anxious patient and significant others, perform an examination, and tell them that anatomical success is the rule in the vast majority of cases. You inform them of the different methods that can be used to treat the detachment and present the chances of success with a single surgical procedure for each, along with the risks.

Which procedure would you choose, or “sway” them towards?

The answer to this question depends on many factors — many of which are surgeon-driven. Surgeons are influenced by their experiences: when they trained, where they trained, who their mentors were and experience since training. 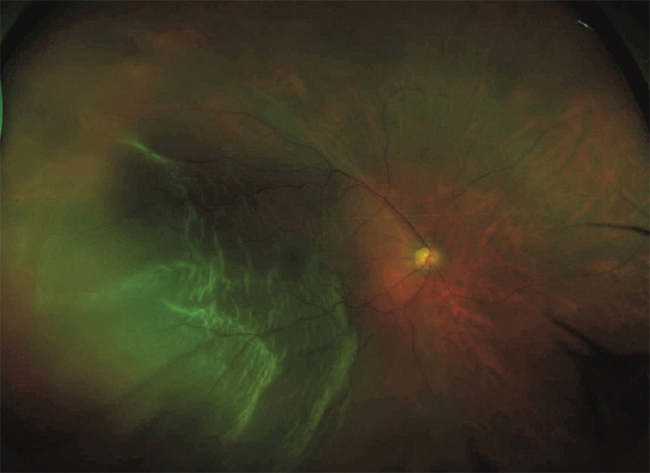 Usually, in a rhegmatogenous retinal detachment, the posterior vitreous cortex has become separated from the retinal surface. The vector forces that ensue favor vitreoretinal traction at the vitreous base region, which sometimes leads to retinal tear formation and subsequent retinal detachment.

However, in some cases of retinal detachment, the posterior vitreous cortex has not become separated from the retinal surface, and peripheral retinal breaks occur (for instance, inferior retinal detachments that were associated with peripheral retinal lattice degeneration with holes or inferior-temporal dialysis in a younger individual); scleral buckling may be appropriate at this point.

For the typical retinal detachment with posterior vitreous separation, especially if the patient is pseudophakic, pars plana vitrectomy for repair of the detachment has gained favor.

Fortunately, complications are uncommon with each procedure, but they may occur.

The main disadvantage of a primary pars plana vitrectomy approach in a phakic individual is acceleration of cataract. There may be an increased risk for epiretinal membrane formation and proliferative vitreoretinopathy with the vitrectomy approach as well.

Potential issues with scleral buckling include motility disorder, ptosis, anterior-segment ischemia, induced myopia and band exposure. Surgical manipulation during scleral buckle surgery is more extensive than with pars plana vitrectomy; there is an increased potential for postoperative pain with the scleral buckle procedure. However, scleral buckling has its many advocates. Many of these advocates contend that effective scleral buckling requires more skill and practice than vitrectomy, and they argue that the demise of scleral buckling techniques is due to insufficient training in the modern era and declining reimbursement rates.

So the debate continues…

In the management of primary retinal detachment, we are fortunate to have multiple procedures available to achieve retinal reattachment. However, the presence of options (scleral buckling, vitrectomy and pneumatic retinopexy) inevitably invites comparisons and controversy. Furthermore, there are many influences on each of these options, with surgeon familiarity and expertise being among the more problematic for any comparison.

Having acknowledged that many detachments may be managed equally well by each of these techniques, it is possible to offer broad outlines that include my own preferences in light of available data and my own experience. The easiest place to start is with primary postcataract detachments: vitrectomy (alone, although some overly cautious surgeons insist on adding an almost-certainly-redundant buckle) is currently my favored choice over primary scleral buckling. In support of the position, I note that recent series have documented impressive success rates with vitrectomy alone,1 and this also provides an important additional advantage with absence of refractive shift inherent in buckling — a shift that is most unwelcome in today's increasingly demanding cataract/refractive patient. There are some data that suggest that pneumatic retinopexy can also be as successful in appropriately configured postcataract cases as in phakic cases,2 but most retinal surgeons (myself included) select vitrectomy over pneumatic in these cases for all but the most optimistic of pneumatic indications in the most understanding patients.

The discussion becomes more controversial in phakic primary detachments. Scenic overlook one is pneumatic retinopexy: some surgeons are oriented to try a pneumatic if possible, and others never perform one even in the most favorable cases (and despite data that indicate a failed pneumatic does not further bias a given eye against reattachment).3

The variable physician-patient dynamic surrounding pneumatic renders its use rather predictable, and suffice it to say that if the detachment falls into a favorable category, and the physician and the patient are so willing, then pneumatic is certainly a fine initial option for a substantial percentage of primary cases.

The crux of the controversy in primary detachment management lies in the choice between scleral buckling vs vitrectomy in phakic cases where pneumatic is not being offered. While reattachment rates are quite comparable between the two techniques, there are concerns regarding the crystalline lens with vitrectomy and its attendant intraocular tamponades and with the general morbidity of scleral buckling. Both surgeries are excellent options for primary phakic detachment, and each surgeon will have a bias. However, in my opinion, vitrectomy is an increasingly attractive option for these cases, and my bias toward vitrectomy in phakic cases also is clearly revealed.

Regardless of any of our biases, the role of scleral buckling is, for many reasons, in steep decline. Recent analysis of Medicare claims data shows that scleral buckle procedures without vitrectomy decreased 69% from 8,691 in 1997 to 2,660 in 2007.4

Management of primary retinal detachment is increasingly by vitrectomy, with a substantial subgroup of those trying a pneumatic, and a shrinking subgroup of those who favor and remain expert — it's hard to imagine them becoming expert with these numbers — in the technique of scleral buckling.5

The primary objective of retinal surgery is not to reattach the retina with the fewest operations; it is to restore the predetachment vision! Pneumatic retinopexy restores predetachment quickly and in a cost-effective fashion.

Recognizing that a retinal detachment can be reduced to (1) a retinal tear with (2) subretinal fluid, Drs. George Hilton and Sandy Grizzard published 25 years ago the first description of the modern pneumatic retinopexy procedure for reattachment of the retina.1 Later, Dr. Hilton initiated a randomized, prospective clinical trial evaluating pneumatic retinopexy as a valid operation: 15 formally trained retinal specialists from seven centers were invited to participate. Initial data from the 198 eyes were reported in 1989.2 Eighty-nine percent of pneumatic retinopexy eyes vs 67% of eyes treated with scleral buckle with the macula detached for two weeks or less (with two years follow-up) obtained 20/50 or better acuity, which was statistically significant.3 If the pneumatic retinopexy failed and the patient was treated with another pneumatic retinopexy, the visual acuity results were still better than a successful scleral buckle surgery.

Ultimately, patient selection remains of paramount importance in obtaining excellent, efficient results with pneumatic retinopexy. Rhegmatogenous retinal detachments associated with retinal tears between 11 and one o'clock and along the horizontal meridians are most successfully managed with pneumatic retinopexy, while breaks in the oblique meridians are more difficult to close. The surgeon should be prepared to reoperate no longer than three to five days (if cryopexy was used) after the primary pneumatic surgery to minimize excessive inflammation, macular pucker and proliferative vitreoretinopathy. If there are elevated breaks at the horizontal meridians, it is beneficial to perform the surgery in one session, rather than as a staged procedure. Pneumatic retinopexy should be reconsidered if the surgeon cannot examine the entire retina, if the patient cannot position, if extensive lattice exists, or if the fellow eye had a giant retinal tear.

I check all patients on day 1. If the break is not closed on day 1, I suspect something is wrong. I restrict activity for about two weeks. Eyes with multiple retinal breaks are indicative of more areas of vitreoretinal traction, so new breaks may be expected in these cases if pneumatic retinopexy is attempted. Pneumatic retinopexy may work well in total retinal detachment, but the surgeon may be more likely to miss a retinal tear in these cases. Success rates may be somewhat lower in pseudophakic eyes; pseudophakia is not a contraindication for performing pneumatic retinopexy. Three-hundred sixty degree laser applied between the insertion of the vitreous base and ora serrata should be considered for eyes presenting with multiple breaks and significant lattice and for pseudophakic detachments.

A 1990 video of Dr. Hilton's narration describing pneumatic retinopexy is available on YouTube at http://www.youtube.com/watch?v=ywIAegb5xsY.

The variety of anatomic presentations of rhegmatogenous retinal detachment is enormous, and an individualized approach to repair of the detachment in each patient is essential. The key is to fit the surgical solution to the problem.

In general, the goals are:

1. To have the best possible final visual outcome.
2. To have the fewest surgical procedures (including avoiding cataract surgery).
3. To have the lowest risk of serious, vision-threatening complications.

In this light, the broad general principles that I would advocate are:

Second, young patients who present with chronic peripheral detachments with round holes and lattice in an inferior location are not uncommon. These can often be managed with segmental scleral buckling with little effect on refractive error and great certainty of successful repair. Vitrectomy alone in this setting is ill advised because the vitreous is still attached and difficult to remove completely.

Third, patients with an inferotemporal dialysis due to trauma are successfully repaired with segmental buckpathology is seenling with a greater than 90% likelihood of stable reattachment with one operation.5

In pseudophakes, vitrectomy or vitrectomy combined with scleral buckling has been shown to result in a very high rate of anatomic success.6 Vitrectomy alone has the advantage of preserving refractive status and makes sense if noncomplex peripheral pathology is seen.7 However, the use of vitrectomy has been reported in one study to be the single strongest predictor for PVR.8 It is for this reason that we think the inclusion of a scleral buckle will help mitigate the risks of a very troubling complication of surgical repair of a retinal detachment, that being recurrent detachment with PVR. Indications for the addition of a scleral buckle to the vitrectomy procedure include patient age less than 55 years old, pre-existing PVR, media problems such as dense vitreous hemorrhage or marked cortical changes in a phakic patient, and peripheral capsular opacification in pseudophakic eyes.