As clinicians, we are confronted several times daily with a patient presenting with retinal vascular disease and macular edema. We communicate with the patient's primary care provider and any appropriate specialists (endocrinologist, cardiologist, nephrologist, etc.) to treat and optimize systemic contributing factors.

For several years, the only decision for local treatment was whether or not the patient was eligible for laser treatment based on the results of landmark studies such as the Early Treatment Diabetic Retinopathy Treatment Study and the Branch and Central Retinal Vein Occlusion studies.

Now, armed with the results from the Diabetic Retinopathy Clinical Research Network, the CRUISE and BRAVO studies, the FAME and RISE studies, and the Ozurdex GENEVA study group, retina specialists have more, and improved, options for our RVO patients.

In this month's column, I have given the participants, Sharon Fekrat, MD, and Dennis Marcus, MD, four clinical vignettes from which to comment. These cases represent some of the more common scenarios that we face daily as retina specialists.

1. How would you treat a 55-year-old Type 2 diabetes patient with vision of 20/25 with no subjective visual complaints, clinically significant diabetic macular edema and intraretinal fluid on SD-OCT?

In this clinical scenario, visual acuity is good and the patient is essentially asymptomatic. Thus, I would recommend observation with good systemic control of glucose, blood pressure, and lipids and reevaluation in four months. If the edema increased at the four-month follow-up visit and the VA decreased, I would offer focal/grid laser treatment initially. If there was concurrent severe NPDR or non–high-risk PDR in the same eye, I would then treat the CSME with focal/grid laser prior to the needed PRP.

2. How would you treat a 50-year-old patient with a nonischemic CRVO of three weeks duration, 20/30 vision and very mild macular edema?

Given the good safety profile and the effectiveness of anti-VEGF agents, I would treat with intravitreal bevacizumab every four weeks for a total of three injections in this case. I would treat on the day of presentation with no “waiting period”—early treatment was demonstrated to be superior to delayed treatment in CRUISE.

If there was no improvement in macular thickness four weeks after the third bevacizumab injection, I would then initiate intravitreal ranibizumab per CRUISE. Non-Medicare patients, such as this 50-year-old, are concerned about the out of pocket costs of ranibizumab and generally prefer a bevacizumab trial first. In my anecdotal experience, treatment with anti-VEGF agents may delay or prevent conversion to an ischemic perfusion status.

After discussion of all the options of observation, intravitreal anti-VEGF injections and intravitreal steroid injections (dexamethasone implant and triamcinolone), I would recommend intravitreal anti-VEGF therapy. I think the anti-VEGF data for treatment of CRVO is very positive and I would commit the patient to at least three or four monthly injections and then consider observation with as-needed dosing, treat and extend dosing, or continued monthly dosing based on the patient's response. The Horizon study data evaluating extended ranibizumab therapy in CRVO indicates that prn dosing may result in a loss of the visual gains obtained during more frequent dosing in the CRUISE study.

As the patient has mild edema, is young and is treated early, I would still consider treat and extend or prn dosing of anti-VEGF therapy after the three or four monthly injections, although continued monthly injections would always be an option. I discuss the similarities and differences between ranibizumab and bevacizumab with regard to FDA approval, efficacy data, safety concerns and cost. Patients often prefer bevacizumab due to cost concerns. 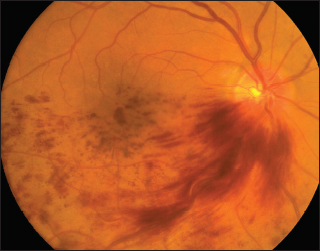 Because some hemorrhages can take months to clear, grid-pattern laser is not initially an option.

3. How would you initially manage a 70-year-old hypertensive woman with a perfused BRVO diagnosed one week ago, associated with a visual acuity of 20/200 and dense intraretinal hemorrhage?

Because dense intraretinal hemorrhage can take months to clear, grid-pattern laser is not initially an option. As a result, I would initiate treatment on the day of presentation with an anti-VEGF agent to promote more rapid clearance of intraretinal hemorrhage than with observation alone and to also concurrently promote resolution of associated macular edema. I begin my anti-VEGF treatment with intravitreal bevacizumab because it is less expensive than ranibizumab, particularly for the non-Medicare patient and for the Medicare-only patient.

I would suggest a second intravitreal bevacizumab injection four weeks later and a third another four weeks later. If there is no improvement in the macular edema on OCT, I would switch to intravitreal ranibizumab per BRAVO. When the intraretinal hemorrhage has sufficiently cleared and determination of the macular edema as perfused on fluorescein angiography, combination treatment with the addition of grid-pattern laser photocoagulation per BVOS would be recommended.

I would continue to treat with intravitreal ranibizumab monthly, and then use the treat and extend approach until the effect of the grid-pattern laser is realized. This can take as long as one year, as demonstrated in SCORE.

My approach would be similar to scenario number 2 for CRVO but I would include laser therapy monotherapy or combined therapy as additional therapeutic options for discussion. Given the dense hemorrhages and severity for this BRVO, I would recommend at least three to four monthly loading doses of anti-VEGF therapy and would prefer treatment over observation despite the short duration of disease. With BRVO, I would certainly consider a treat and extend or prn dosing regimen if the patient responded with visual acuity gain and OCT thinning. Continued monthly dosing would be considered if edema persists, especially for a more severe BRVO, as described. With clearing of retinal hemorrhage, and residual edema, laser would also be considered later as an adjunctive therapy.

4. A 74-year-old hypertensive has had seven monthly bevacizumab in jections to treat macular edema associated with CRVO. Acuity had improved from 20/200 to 20/40 with resolution of macular edema (890 μm initially, improved to 210 μm). The photoreceptor IS/OS junction and ELM are only mildly disrupted. The edema has returned (370 μm) and vision is now 20/80. How would you proceed?

Given the previous excellent response to bevacizumab, I would recommend continuing monthly bevacizumab therapy. I would explain to the patient that CRVO patients often require chronic therapy and that monthly therapy will likely result in the best visual outcome. Given the CRVO Horizon Study data demonstrating that prn dosing of ranibizumab results in a loss of visual gains in CRVO, I would recommend resuming monthly therapy for at least three to four months and then contemplate a treat and extend approach. If the edema returns or persists with monthly anti-VEGF therapy, I would discuss intravitreal steroid as a second-line option in a pseudophake. RP