Vascular Lesions of the Peripheral Fundus

Distinguishing them from malignancies is essential.

Vascular lesions of the peripheral ocular fundus may arise from either the retinal or choroidal circulation and may be simple malformations, benign tumors or the product of abnormal vascular proliferation. These lesions, although benign, frequently present as an elevated mass in the peripheral fundus and may be misdiagnosed as a malignant melanoma arising either from the peripheral choroid or ciliary body. In this article, I shall discuss both retinal and choroidal vascular lesions, paying particular attention to those that may be confused with a malignant neoplasm.

• Peripheral Exudative Hemorrhagic Chorioretinopathy. Although choroidal neovascularization arising in the macular region (neovascular age-related macular degeneration) is well recognized as an important cause of visual loss, neovascularization arising from the peripheral choroid is less well recognized. In 1980, Annesley1 reported a series of peripheral hemorrhagic lesions in 32 eyes of 27 patients, using the term peripheral exudative hemorrhagic chorioretinopathy (PEHCR) to describe this condition. He noted that this condition predominantly affected the elderly population, occurred almost exclusively in Caucasians, was frequently bilateral and had a propensity for the inferior temporal fundus.1 Such findings have been confirmed by subsequent studies.2 Alternative terms for this condition include: eccentric disciform, extramacular disciform and peripheral disciform.2

Clinically, PEHCR typically presents as a raised mass in the temporal fundus posterior to the equator. Their color, contour and surface appearance are extremely variable and are, to a large extent, dependent on the age of the lesion. Newly evolved lesions may appear as a uniformly deeply pigmented, dome-shaped mass with a smooth surface and well-defined margin due to the presence of recent subretinal hemorrhage. With time, the lesion becomes more heterogeneous in appearance, as the subretinal blood becomes organized and fibrosis develops. At this stage, the lesion may have an extremely irregular contour and may even appear multilobed (Figure 1). 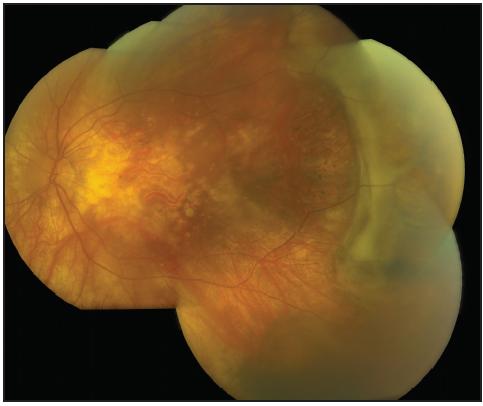 Figure 1. Peripheral exudative hemorrhagic chorioretinopathy. This is an extensive mature lesion. Note the sharply defined edges of the main part of the lesion, suggesting organization and contraction of an old subretinal hemorrhage. There is accompanying AMD.

Eventually, there may be complete reabsorption of the blood, leaving an irregular amelanotic fibrous mass. Subretinal fluid and extensive subretinal exudate are frequently observed in cases of PEHCR, the latter serving as a useful sign in differentiating these lesions from choroidal melanomas where there is generally no — or only minimal — subretinal exudation at the base of the lesion. An associated vitreous hemorrhage may be observed in approximately 25% of cases;2 again, this may be a useful feature in differentiating the lesion from a malignant neoplasm where such hemorrhage is uncommon.3

Fluorescein angiography may demonstrate patchy blocking of the choroidal fluorescence as a result of hemorrhage or retinal pigment epithelial changes; CNV is, however, rarely observed.2 Ocular ultrasonography will confirm the presence of an elevated lesion that may have high intermediate, though internal, reflectivity.2 In my experience, it is quite common to see a degree of acoustic heterogeneity within the same lesion.

A cleft separating the lesion from the underlying choroid can be observed in over 50% of cases,2 and this again is a valuable sign in distinguishing these lesions from a peripheral melanoma. In most instances, PEHCR can be differentiated from a peripheral melanoma by careful examina tion of the lesion with the indirect ophthalmoscope and 90 D lens.

PEHCR is bilateral in approximately one-third of cases, and for this reason it is important to carefully examine the peripheral fundus of the fellow eye. Obviously, the finding of a similar peripheral lesion in the fellow eye would strongly support the diagnosis of PEHCR. In cases where the diagnosis is still uncertain, periodic observation can be extremely valuable in differentiating these lesions.

• Circumscribed Choroidal Hemangiomas. These benign vascular tumors usually appear as a discrete round or oval, orange/reddish lesion with an indistinct peripheral margin.4 The majority arise at the posterior pole or adjacent to the optic disc. Involvement of the peripheral choroid is extremely uncommon. In a series of 71 cases of circumscribed choroidal hemangiomas, 68 (95.8%) were located entirely posterior to the equator, and in the three remaining cases, only part of the tumor extended anterior to the equator.5 For this reason, the diagnosis of a circumscribed choroidal hemangiomas arising wholly or mainly anterior to the equator must be made with extreme caution.

• Varix of the Vortex Vein Ampulla. A varix arising at the ampulla of a vortex vein is an uncommon but well recognized choroidal malformation that may simulate a small peripheral choroidal melanoma.6-9 The true incidence of these lesions is unknown because they are, without exception, asymptomatic and vary in size dependent on the position of gaze. Thus, it is probable that such lesions are underdiagnosed. Ampullary varices may be multiple and bilateral.6,9,10

Clinically, varices of the vortex vein ampulla appear as uniformly deep red or grayish, smooth, dome-shaped lesions arising in the equatorial region of the fundus (Figure 2). In patients with pale fundi, the prominent choroidal vasculature that drains into the ampulla may be seen surrounding the lesion. The posterior edge, in my experience, appears more sharply defined, giving rise to a shadow-like effect on the base of the lesion. Subretinal fluid or exudates are not associated with varices of the vortex vein ampulla. Varices appear more prominent when the patient's gaze is directed toward the site of the lesion, and indeed they may completely disappear when the eye is in the primary position or when digital pressure is applied to the globe. The change in the appearance of a varix with gaze provides the clinician with a simple method of differentiating them from other choroidal lesions. 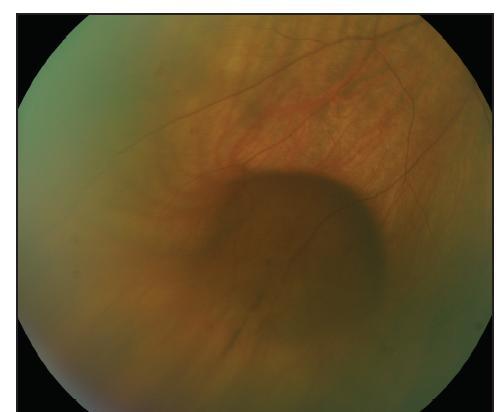 • Retinal Capillary Hemangiomas. These benign vascular tumors may be juxtapapillary or peripheral in location.11 They are multiple in approximately one-third of patients and bilateral in up to 50% of cases.11 The association with von Hippel–Lindau disease is well established and the prevalence of this condition in patients with a solitary or multiple retinal capillary hemangiomas is reported to be between 20% and 58%.12

Clinically, peripheral retinal capillary hemangiomas appear as round, circumscribed, orange- to red-colored retinal lesions that usually arise in the temporal peripery.13 Prominent feeder vessels lead to and from the tumor, which is typically surrounded by intraretinal and/or subretinal exudation. Macular changes, including epiretinal membranes and retinal exudation, may occur as a remote effect of these tumors.12 Peripheral retinal capillary hemangiomas usually do not present a diagnostic problem, particularly when the patient is known to suffer from von Hippel–Lindau disease or there is a family history of this condition. Ancillary investigations are usually unnecessary; however, fluorescein angiography may occasionally be of value in demonstrating the vascular nature of atypical lesions.

• Cavernous Hemangiomas of the Retina. These rare vascular tumors were first described by Niccol and Moore in 1934.14 Clinically, these lesions appear as grape-like clusters of blood-filled saccular spaces arising from the inner layers of the midperipheral or peripheral retina (Figure 3).15 Occasionally, such lesions may occur on the surface of the optic disc. In contrast to capillary hemangiomas, there are no prominent feeder vessels or retinal exudation. 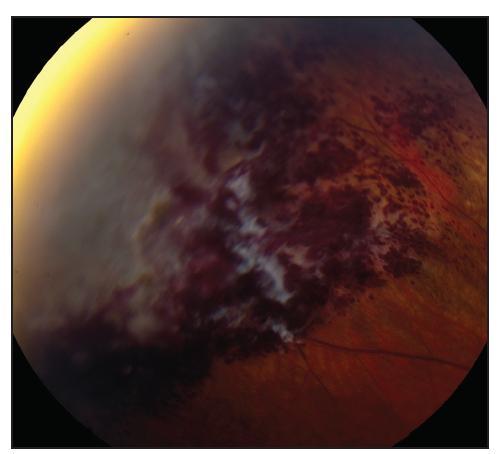 Figure 3. An extensive peripheral cavernous hemangioma of the retina. Note the absence of prominent feeder vessels and subretinal exudate.

In general, peripheral retinal cavernous hemangiomas are asymptomatic, although occasionally they may be associated with vitreous hemorrhage or reduced vision secondary to macular ERMs.11 The majority of retinal cavernous hemangiomas are unilateral solitary lesions of less than two disc diameters in size. Rarely, circumferential retinal cavern ous hemangiomas involving 360° of the peripheral retina have been described.16 The fluorescein angiographic features are highly characteristic, with a low-flow system and late filling in the venous phase. The saccular dilatations typically have a fluorescent cap with a hypofluorescent base as a result of sedimentation of the erythrocytes from the overlying plasma.11

While the majority of retinal cavernous hemangiomas are sporadic, familial cases inherited as an autosomal dominant trait and associated with cerebral cavernous malformations have been reported.17-19

• Retinal Vasoproliferative Tumors. Though uncommon, these are now recognized as a distinct clinical entity. In 1983, two major series that identified their clinical features appeared consecutively in the same issue of Ophthalmology.20,21 Similar lesions have been reported in the literature both prior to and following these reports using a variety of terms that, to some extent, delayed the recognition of these tumors as a distinct disease entity.22

Vasoproliferative tumors generally appear as globular or dome-shaped lesions arising in the peripheral retina (Figures 4 and 5). The color is variable, and while most are described as either yellow or pink, some are described as white, gray or even reddish in appearance.23 Their vascular nature can be determined by the presence of telangiectasic vessels either on the surface of the lesion or embedded in the deeper tumor matrix. Small clusters of aneurysms of varying size may be associated with the latter vessels. Although these tumors lack the markedly dilated and tortuous feeder vessels that are typically seen in association with capillary hemangiomas, normal or slightly dilated retinal vessels may be observed entering the posterior aspect of the lesion.23 The tumor may be partially obscured by the presence of hemorrhage, either in the overlying adjacent vitreous or on the surface of the mass. 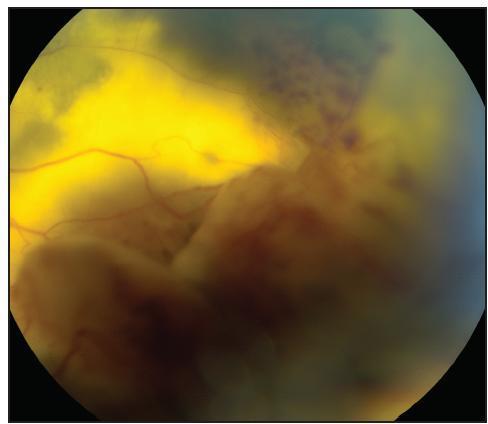 Figure 4. A large vasoproliferative tumor in the inferior temporal retina. Abnormal telangiectatic vessels can be seen on the surface and within the tumor. There is extensive accompanying subretinal exudate.

Over 80% of vasoproliferative tumors are associated with sub- and/or intraretinal exudation, which is often extensive and may, on occasion, involve the posterior pole.24 An exudative retinal detachment accompanies these tumors in approximately 50% of cases.24 The majority of vasoproliferative tumors occur in the peripheral retina and can involve the ora serrata, with over 50% involving the inferior temporal quadrant.24 In keeping with other peripheral retinal vascular tumors, these lesions may be associated with macular lesions, including ERMs and cystoid macular edema.24

Retinal vasoproliferative tumors may be idiopathic (74%) or occur in association with another ocular condition (26%). Idiopathic tumors are generally solitary in nature, whereas secondary tumors may be multiple. The latter have been described in association with a number of pre-existing ocular problems, including inflammatory conditions such as toxoplasmosis,24-26 toxocariasis24 and intermediate uveitis.24 They have also been described in association with a number of congenital conditions, including retinitis pigmentosa,24,27-29 retinochoroidal coloboma24 and Waardenburg's syndrome.30 The associations also include Coats' disease,31 retinopathy of prematurity32 and sickle-cell disease,33 and they may also follow retinal detachment surgery.24,34

Ancillary investigations, such as fluorescein angiography or ultrasonography, are of limited value in differentiating vasoproliferative tumors from other retinal lesions. In many cases, the peripheral location of the tumor makes it difficult, or even impossible, to obtain adequate angiographic images. In cases where it is possible to perform angiography, lesions typically fill rapidly in the early phase and become increasingly hypofluorescent with diffuse leakage in the late phases. The dilated telangiectatic vessels and aneurysms may be more apparent during angiography. Vasoproliferative tumors appear as a solid lesion, lacking choroidal excavation, with medium to high internal reflectivity on standard ultrasonography.24

Histologically, vasoproliferative tumors are composed of both glial and vascular elements, and this has led to speculation that these lesions are reactive proliferations rather than true tumors.35-38

Vascular tumors of the peripheral choroid or retina are uncommon and may provide the clinician with a difficult diagnostic problem. In general, ancillary investigations, such as fluorescein angiography, are of limited value due to the peripheral nature of these lesions. Meticulous examination of the lesion is required to establish the diagnosis and differentiate a benign vascular tumor from a peripheral choroidal or ciliary body melanoma. It should be noted that all types of retinal vascular tumors may be associated with macular problems, in particular, ERM formation, and for this reason it is important to undertake a careful examination of the peripheral retina in cases of apparent idiopathic macular edema or ERMs, particularly in instances when the condition is unilateral and in a young patient. RP