A review of pathophysiology, diagnosis and treatment

Optic disc pit is a rare, congenital excavation of the optic nerve head, first described by Wiethe1 in 1882. The pit is thought to arise from incomplete closure of the superior end of the embryonic fissure and to be one manifestation in a spectrum of congenital optic disc anomalies, including morning glory syndrome, juxtapapillary staphyloma and optic nerve coloboma. Prevalence of the condition is estimated at between 0.02%2 and 0.19%3 with men and women affected equally.4 Ten to 15% of optic disc pits are bilateral, and most are located in the temporal region of the optic disc, usually with temporal peripapillary atrophy.4,5

The diagnosis can be made on slit-lamp funduscopic exam or with direct or indirect ophthalmoscopy. Most patients with an optic disc pit demonstrate visual field defects in the affected eye. These defects include arcuate scotomas, peripheral localized constrictions (usually involving less than one quadrant) and, occasionally, a nasal or temporal step4 without progression. More worrisome are central visual defects that arise secondary to serous macular detachment, a condition often associated with optic disc pits.

Prior to the development of optical coherence tomography,10 the nature of these retinal detachments was accurately described by Lincoff et al.,11 who proposed that two distinct parts of the retina are affected: the inner layers develop cystic and schisis-like spaces, while the outer retina may secondarily detach as fluid accumulates in the subretinal space. The maculopathy can be discovered on slit-lamp funduscopic evaluation or with direct or indirect ophthalmoscopy. Fluorescein angiography and OCT may provide further elucidation.

Improved visualization techniques, most notably OCT, have increased our understanding of the physical structure of the maculopathy associated with optic disc pits and the course of the disorder with various treatment regimens.12-33 These improved techniques have also confirmed the bilaminar nature of the maculopathy, with primary inner-layer schisis and secondary outer-layer detachment. Indeed, OCT is now the mainstay of pre- and post-treatment documentation.

Most investigations of optic disc pits and associated serous macular detachment fall into two general categories: elucidation of the pathogenesis and evaluation of treatment modalities. These categories are not mutually exclusive because the presumed etiology often dictates which treatment modality is most appropriate.

There continues to be some disagreement over the source of the fluid, seen within and below the retina in patients with optic disc pits, that leads to the associated macular detachments. Three hypotheses predominate, each with varying levels of supporting evidence: posterior vitreous abnormalities; cerebrospinal fluid (CSF) leaks from the subarachnoid space; and fluid conduction through Bruch's membrane and the retinal pigment epithelium. Finally, there is a fourth hypothesis, proposing that immature or unsupported vessels within the optic disc pit leak the fluid that is seen intra- and subretinally in optic disc pit–associated maculopathy.34 However, this hypothesis fails to define the role of the optic disc pit and thus has little support.

The most broadly supported hypothesis proposes that the source of the intra- and subretinal fluid seen in optic disc pit maculopathy is from vitreous fluid associated with posterior vitreous abnormalities. Liquefaction of the posterior vitreous and detachment from the retina cause traction on the optic disc and inner retina, allowing liquefied vitreous fluid to enter the optic pit and migrate laterally, causing intraretinal schisis and subretinal detachments. First proposed by Sugar35 in 1964, this concept has been supported by several subsequent authors.4,36-41 Brown et al.,4 demonstrated that three-fourths of patients with optic disc pit–associated maculopa-thy also had posterior vitreous detachments (PVDs).Further, most optic disc pit patients without maculopathy did not have PVD. 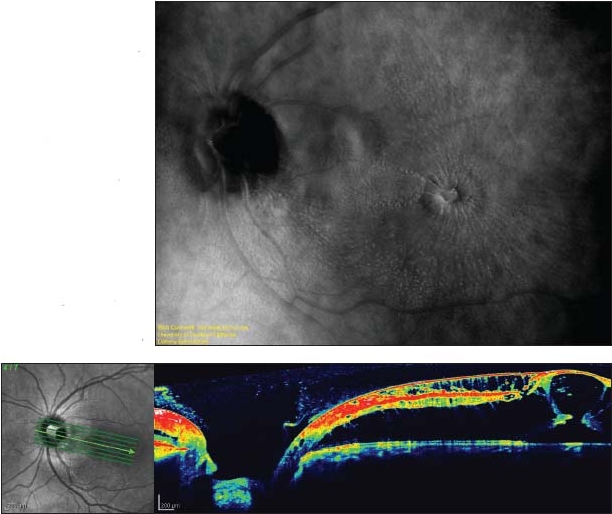 In 1998, Postel et al.41 reviewed seven patients with optic disc pit and serous macular detachment. In each case, the authors noted a torn "diaphanous tissue" overlying the pit, suggesting traction at the posterior pole. More recently, in 2005, Hirakata et al.15 evaluated 11 affected patients successfully treated with vitrectomy and gas tamponade. The authors credit their success to the use of vitrectomy, which released the optic nerve head and macula from vitreous traction. In 2007, using OCT, Theodossiadis et al.16 studied posterior vitreous findings in 38 eyes with optic disc pit maculopathy. Twenty-eight eyes (74%) had vitreous abnormalities. In 2008, Patton et al.13 described a 43-year-old male with optic disc pit maculopathy. Over the next two years, despite no treatment, the patient's vision improved, and the sub- and intraretinal fluid resolved, as evidenced by OCT. The authors postulate that a PVD may have initiated the macular detachment and that, as the vitreous completely separated from the macula, the traction resolved, and the patient's vision gradually improved.

The higher intracranial pressure relative to the intra-ocular pressure could force the cerebrospinal fluid to pass intraretinally, leading to the unusual schisis-like findings typical of optic disc pit maculopathy. In 2004, Johnson and Johnson43 suggested that CSF pressure transmitted to the pit through various mechanisms might explain cases of optic disc pit maculopathy in children and adolescents, who are too young for vitreous changes to be taking place.

In 2006, Kuhn et al.44 presented a patient with macular detachment associated with optic disc pits who was treated originally by vitrectomy with silicone oil implantation and peripapillary laser retinopexy. Nine years later, during a neurological assessment that included magnetic resonance imaging for persistent headaches, emulsified silicone oil was found intracranially. Presumably, the oil passed from the vitreous space, through the optic disc pit, and into the subarachnoid space along the optic nerve sheath, demonstrating a case of direct communication of CSF with the optic disc pit.

The third hypothesis suggests that the fluid is conducted from the choroidal vasculature through Bruch's membrane and the RPE. Historically, this source has not received much support.34 However, in 2004, Vedantham and Ramasamy14 described a patient with fluorescein angiographic evidence of fluid leak through the RPE, while other sources of fluid were ruled out.

Because optic disc pits are rare, there is no clear consensus about the best treatment for associated macular detachment. Furthermore, studies examining this topic tend to be small, retrospective, noncomparative and nonrandomized. Nonetheless, some outcome trends can be seen with treatment modalities that have been in use for several years. More recent descriptions of novel techniques show promise, which will require future confirmation.

Before deciding which treatment to use, ophthalmologists must decide whether treatment is warranted. Sobol et al.7 followed 15 patients with untreated optic disc pit –associated serous retinal detachments for an average of nine years. Visual outcomes were poor overall, and all of the eyes that lost vision did so in the first six months, indicating not only that the macular detachments require treatment, but that treatment should not be delayed.

Since then, most publications on the topic have supported surgical management, but several case reports have also shown success with expectant management.13,14,19 Vedantham and Ramasamy14 describe a case in which the patient's visual acuity rapidly improved from 1/60 to 20/30 over a one-month period despite no treatment. Spontaneous resolution of the intra- and subretinal fluid was documented with OCT. Patton et al.13 describe a similar case in which the visual and anatomical improvement took place over two years.

Once the decision to treat is made, a number of treatment modalities are available. With such disagreement over the source of the fluid responsible for the detachments, this variety is not unexpected. Whatever treatment is chosen, the idea is to readhere the outer retina and prevent further fluid ingress. To combat traction on the optic disc pit and retina, pars plana vitrectomy is most often performed.5,15,17,20,22,26,29,41 Variations on this procedure include limited preretinal vitrectomy,27 posterior hyaloid resection,5,40 and internal limiting membrane peeling.29,30

To prevent reaccumulation of fluid via a presumed communication between the optic disc pit and the macula, laser photocoagulation of the temporal peripapillary retina has been performed.5,26,29,36,37,41 Studies using focal laser alone have demonstrated less than satisfactory anatomical results41 and equivocal visual outcomes.34

Various combinations of the methods discussed above have been employed in recent years, with a seemingly growing consensus that a triple treatment, employing vitrectomy, laser, and gas (with or without posterior hyaloid dissection), may produce the best outcomes.5,26,29,41,46 A summary of studies using this regimen, up to 1998, is presented by Postel et al.41

García-Arumí et al.5 describe 11 patients with optic disc pit maculopathy who underwent pars plana vitrec-tomy, posterior hyaloid dissection, peripapillary diode laser prior to retinal reapplication, and C3F815% injection. OCT, before and after treatment, confirmed successful resolution of the macular detachment in all 11 patients. Nine of the 11 patients gained at least two Snellen lines as their macular detachments resolved. In 15 months of follow-up, two patients had a recurrence of their macular detachments. Hirakata et al.15 presented a series of patients who received similar treatment, but without the use of laser. Their patients had similar outcomes with no cases of recurrence.

Several authors have published reports describing the results of novel techniques for treating optic disc pit–associated serous macular detachment. In a case report, Spaide et al.20 proposed making half-thickness cuts to the retina with a bent 25-gauge needle. This maneuver, along with vitrectomy, was to allow intra- and subretinal fluid to escape. The posterior hyaloid was left intact. Intraocular gas was not used to prevent premature closure of the surgical fenestration. The patient's visual acuity improved from 8/400 preoperatively to 20/20 one month after surgery. This procedure avoids placing laser burns in the retinal tissue adjacent to the optic nerve head. A similar procedure is described by Schaal et al.,27 who used a 27-g cannula to make three-quarter–depth cuts, accompanied by a limited preretinal vitrectomy.

In contrast to the passive drainage of retinal fluid through surgical fenestrations, a more active approach was used by Jalil et al.17 They describe a patient with optic disc pit–associated serous macular detachment, whose vision improved after subretinal fluid was drained with a 42-g cannula, along with vitrectomy, induction of posterior vitreous detachment, and ILM peel. No laser retinopexy was used around the cannula insertion site. The procedure was completed with a fluid-air exchange followed by internal gas tamponade with 14% C3F8. Before surgery, the patient's visual acuity was 1.00 LogMAR; eight months after surgery the visual acuity was 0.4 LogMAR. A similar procedure is described by Ziahosseini et al.,26 though this surgeon also applied argon laser to the retinotomy site.

In summary, optic disc pit with associated serous macular detachment is a rare but sight-threatening disorder. However, improved visualization techniques, most notably optical coherence tomography, and evolving surgical interventions have improved outcomes. Further studies will follow the outcomes of these and other novel surgical techniques, providing further clarity to the pathophysiology and treatment of optic disc pit–associated serous macular detachments. RP