Clinical hallmarks of DR can be associated with a variety of diseases.

Diagnosing diabetic retinopathy (DR) is considered part of the daily "bread and butter" of the retinal specialty. We are familiar with the hallmarks of the retinal manifestations of the disease, which include but are not limited to intraretinal hemorrhages, microaneurysms, capillary dropout, telangiectasia, cotton wool spots and exudates, as well as macular edema, retinal neovascularization, vitreous hemorrhages and tractional retinal detachments in the advanced stages.

At times, however, patients present with retinal pathology mimicking DR, and it is necessary to consider other etiologies in the differential diagnosis, especially in the presence of a negative work-up for diabetes (see Table 1). These conditions present with features typically seen in DR, either individually or in combination. While the most common differential diagnoses include hypertensive retinopathy, radiation retinopathy, ocular ischemic syndrome and vascular occlusive disease, other less frequent conditions — such as infectious etiologies, inflammatory and autoimmune diseases, cancer and paraneoplastic retinopathies, muscular dystrophies and craniofacial disorders, among others — need to be considered.

In most cancer patients, the diagnosis has been established before presenting to an ophthalmologist. However, in rare instances, ocular symptoms and examination lead to the diagnosis of leukemia or other blood dyscrasias. While many of the lymphomas and leukemias can directly infiltrate the retina and choroid with tumor cells, it is usually the associated retinopathy, secondary to hyperviscosity, anemia or thrombocytopenia, that closely resembles diabetic retinopathy.

Lymphoma in general is considered to be one of the "Great Masqueraders." It can involve almost all ocular structures, including the retina, choroid, vitreous and optic nerve. While most changes are infiltrative in nature, retinal hemorrhages have been described in patients with T-cell lymphoma,8 and optic nerve infiltration may resemble diabetic papillopathy.9

Multiple myeloma is a malignancy of plasma cells in the bone marrow mainly characterized by the appearance of paraproteins (Bence-Jones) in serum and urine. Advanced disease can lead to so-called endorgan damage, including hypercalcemia, renal insufficiency, anemia and bone lesions. Findings in the retinal vasculature that have been described include tortuosity, scattered hemorrhages, microaneurysms throughout the posterior pole, and, in the later stages, retinal venous occlusive disease.12 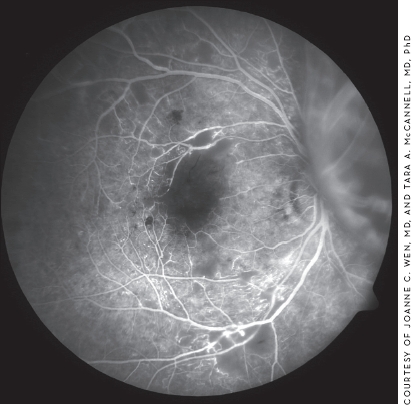 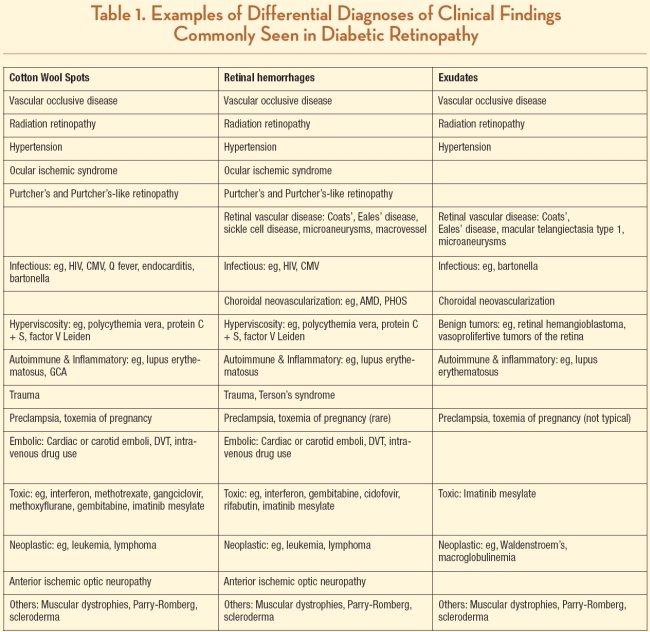 Hyperviscosity is thought to be the origin of microangiopathy involving the retinal vasculature in many of these cases. Polycythemia vera is an example of a chronic myeloproliferative disease with hyperviscosity secondary to an overproduction of erythrocytes and platelets. Ocular findings include retinal vascular occlusions, hemorrhages, cotton wool spots, ischemic optic neuropathy, vascular tortuosity and markedly delayed arterial and venous recirculation time on fluorescein angiography.13-15

Ocular ischemic syndrome is a condition that can be either unilateral or bilateral in nature and is characterized by delayed choroidal filling time on fluorescein angiography, possible disc and retinal vessel staining, peripheral ischemia, microaneurysms, macular edema, cotton-wool spots and even neovascularization. The lack of vascular tortuosity in the presence of narrow arteries and dilated retinal veins may give retinal specialists a clue toward the correct diagnosis; so does the presence of anterior-segment inflammation.

Unlike diabetes, these patients can first present with ocular pain, in addition to sudden or gradual loss of vision. Carotid artery stenosis (internal and external), giant cell arteritis and vascular occlusive disease of the aortic arch, ophthalmic artery, central retinal artery and vein, as well as cilliary arteries, have to be ruled out.16-20

Retinal findings have been described in several inflammatory, collagen-vascular and autoimmune disorders, such as systemic lupus erythematosus, panarteritis nodosum, sarcoidosis and Takayasu arteritis. Cotton-wool spots and, less frequently, hemorrhages seem to be the most common findings, except for Takayasu arteritis, which presents as an ocular ischemic syndrome with widespread microaneurysms.21

Facioscapulohumeral muscular dystrophy (FSHD), also known as Landouzy-Dejerine, is an autosomal-dominant inherited form of muscular dystrophy affecting the skeletal muscles of the face, shoulder and upper arms. Sensorineural hearing loss, retinal telangiectasia, exudates and retinal ischemia have also been described.22 Most cases of FSHD are associated with the deletion of integral copies of a tandem repeated 3.2kb unit (D4Z4 repeat) at the subtelomeric region 4q35. Genetic testing is available for patients.23

Duchenne's muscular dystrophy is a severe and rapidly progressing form of muscular dystrophy with X-linked inheritance (dystrophin gene Xp21). It usually becomes symptomatic in early childhood and initially affects lower extremities and the pelvis. Only a few case reports of retinal involvement are available. One of the most striking cases has been reported by Ober and coauthors; this 18-year-old patient presented with widespread vascular abnormalities, including beading, tortuosity, neovascularization and leakage.24

Craniofacial abnormalities can affect the eye in many ways, most frequently due to involvement of the orbital configuration and muscular alignment. Rarely, retinal disorders are described.

Parry-Romberg is characterized by slowly progressive hemifacial atrophy starting in the first or second decade of life. Several neurological symptoms (including seizures, intracranial vascular malformations and trigeminal neuralgia) have been described, in addition to other symptoms, such as alopecia and vitiligo. The origin is unknown and several hypotheses with regard to a potential infections/inflammatory etiology vs a disruption or disturbance of the sympathetic innervations have been proposed. Ophthalmic findings include a wide variety of problems mostly related to the progressive atrophy of periorbital and ocular tissues, eg, ocular misalignment, enophthalmus and pupillary abnormalities. In the posterior segment, retinal neovascularization, telangiectasia, peripheral ischemia retinal vasculitis and exudative detachments have been reported.11,25-27

Linear scleroderma "en coup de sabre" is a localized form of scleroderma with facial involvement but lack of systemic fibrosis. Together with Parry-Romberg, it is considered to be part of the linear scleroderma spectrum. In the retinal vasculature, tortuosity, neovascularization, ischemia, cotton wool spots, telangiectasia and lipid exudation have been described.11,28

Macular telangiectasia type 1 has many overlapping features with Coats' disease. Both can present with diabetic features, including microaneurysms, exudates, hemorrhages and telangiectasia. Frequently, the age of the patient can aid in the correct diagnosis. But delayed diagnosis or adult-onset Coats' disease represents greater diagnostic challenges. Less well known is that macular telangiectasia type 2 may also show parafoveal microaneurysms, in addition to the typical telangiectatic changes on fluorescein angiography.11

Retinal macrovessels are a rare congenital disorder with a large "aberrant" vessel crossing the horizontal raphae. Adjacent vascular changes have been described, which can include vascular tortuosities, arteriovenous anastomosis, changes in the macular capillary bed, aneurysms and hemorrhages.29-31

In summary, clinical hallmarks of diabetic retinopathy can be associated with a wide variety of diseases. After excluding the most common differential diagnoses, rare conditions have to be considered. While this article gives an overview of several diseases, there are obviously many more conditions that directly or indirectly can resemble features of diabetic retinopathy.

It is important to remember that the ophthalmologist may aid in making the correct diagnosis and facilitating these patients' access to appropriate care and treatment. RP