Thanks to Dr. Melamud et al. for the photo essay of the 28-year-old woman with peripapillary choroidal melanoma obscuring the optic nerve head (Retinal Physician, July/August 2008). The B scan images are not depicted, but assuming that no posterior extension is detected, could proton beam therapy have been considered in this patient? With proton beam therapy, the patient would likely have developed some loss of vision and would have some risk of neovascular glaucoma, but to my knowledge young healthy patients with peripapillary lesions may do surprisingly well, keeping the eye and maintaining some ambulatory vision.

Thank you for asking me to participate in the discussion of the photo essay in Retinal Physician.

We treat all patients with choroidal melanomas involving the optic nerve with proton beam irradiation, and we have treated more than 100 patients to date. There is certainly a high incidence of radiation papillopathy, but a large number of patients can maintain some vision for a long period of time.

I do not see any reason for enucleating these eyes, since the incidence of metastasis is the same with both treatments.

We would like to comment on the article by Dr. Melamud et al. regarding a case of juxtapapillary choroidal melanoma obscuring the optic disc managed by enucleation.

In the past, enucleation was the only alternative for management of juxtapapillary or epipapillary choroidal melanoma. Developments in radiation design over the past 20 years, however, have allowed refined methods of plaque radiotherapy and charged-particle radiotherapy to safely and effectively manage these difficult tumors.1-5 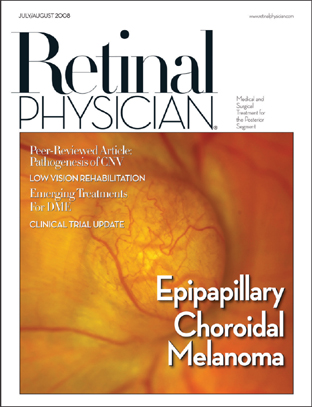 Choroidal melanoma touching, or even completely overhanging or encircling the optic disc, can now be treated successfully with plaque radiotherapy,6,7 with equivalent survival to enucleation.8

Over a 31-year period, we have treated 650 cases of juxtapapillary melanoma, with an overall tumor control rate of 89%, metastatic rate of 10%, and mortality rate of 3%. In a subanalysis of 141 eyes with choroidal melanoma overhanging the optic disc, tumor control was achieved in 90% of cases, metastatic rate was 13% and mortality rate was 3%.6 Thus, it should be understood that custom designed plaque radiotherapy is safe and effective for juxtapapillary choroidal melanoma, even if the tumor overhangs the optic disc.

Regarding visual acuity, naturally the results following radiotherapy are superior to those following enucleation, but poor central visual acuity was found in 65% of eyes following plaque radiotherapy in our whole series. Conversely, 35% of eyes maintained visual acuity of better than 20/200 at mean follow-up of 52 months. This could be very important to the patient, particularly if the opposite eye had limited vision.

Although enucleation was an acceptable treatment in the case reported by Melamud et al., the melanoma was relatively small and located on the nasal side of the optic disc, and the visual acuity (not reported by the authors) was probably good. Additionally, the authors did not mention or illustrate the pathology findings on the enucleated eye. Inclusion of the pathology could have provided an opportunity for an instructive clinicopathologic correlation.

In this day and age, custom designed plaque radiotherapy should, therefore, be considered and discussed with all patients who have juxtapapillary melanoma, even when the optic disc is obscured. In our experience, this approach has allowed 87% of patients to avoid enucleation.

We appreciate Dr. Dahr's letter and the invited commentaries by Dr. Gragoudas and Drs. Sagoo, Shields, and Shields. To clarify, the purpose of our report was to highlight modern ophthalmic photographic imaging techniques useful in the diagnosis of ocular melanoma and was not intended as a discussion on therapy for peripapillary or epipapillary uveal melanoma.

With regard to this case, the high-resolution ultrasound (not shown) did not demonstrate extension into the optic nerve. This was confirmed by orbital imaging performed prior to surgery and by subsequent histopathology, which confirmed the tumor was confined to the prelaminar location.

We discussed several options with the patient, including: enucleation, notched plaque brachytherapy with adjuvant transpupillary thermotherapy, and proton beam radiotherapy. On our Ocular Oncology Service, we favor globe-sparing therapies for our patients when appropriate. So, in this case, we recommended a radiotherapy option, while noting the risks of vision loss, glaucoma, and secondary enucleation; the patient, however, chose primary enucleation.

Juxtapapillary, circumpapillary, or epipapillary choroidal melanomas are challenging neoplasms due to their posterior location and proximity to important vision and vascular structures. Enucleation has been a common treatment for such tumors.

The Collaborative Ocular Melanoma Study (COMS) group reported that in 590 COMS-ineligible patients in whom enucleation was performed for tumors less than 15 mm in greatest basal diameter, 281 (48%) had juxtapapillary tumors.1 The COMS medium size tumor arm (brachytherapy versus enucleation) excluded melanomas within 2 mm of the optic nerve and actually considered such tumors, when less than 8 mm in apical height, for entry into the COMS large tumor trial.2 So we lack globe-sparing treatments for these tumors whose efficacy has been validated by large, prospective, randomized clinical trials.3

There have been important contributions toward globe-sparing radiotherapy in such tumors near the optic disc.4,5 It is clear that eyes can be retained at a very high rate though visual acuity declines over time.6,7 Local tumor control seems to favor charged-particle radiotherapy (helium ions or protons) compared to plaque therapy alone.3,7 Factors involved with these differences include challenges with accurate plaque placement around such posterior tumors and plaque edge lift effecting — factors that may be minimized with the use of deep slotted notched plaques, altered radiation dosing, ultrasound confirmation of plaque placement, and adjuvant transpupillary diode thermotherapy.8,9 Vascular complications may still be significant.4

Patient perceptions about treatments in oncology settings can often drive their decisions to choose one therapy over another. Increasing data on comparative therapies will continue to help clinicians to better guide their patients with challenging tumors.