In 1958, Walter Kempner, a Department of Medicine professor at Duke University School of Medicine, documented with fundus photographs the reversal of diabetic retinopathy following adherence to a regimented rice/fruit dietary program.1

For 13 of 44 patients with specific diabetic retinopathy findings, improvement in the fundus picture became apparent for both eyes during the period of observation (Figures 1 and 2). For 7 patients the retinopathy cleared in only 1 eye. Nine patients showed indication of retinopathy progression. For 15 cases there was no change.

WALTER KEMPNER: WHO WAS HE?

Walter Kempner was born on May 17, 1903 in Berlin, Germany. His physician parents were medical researchers who worked with Robert Koch, discover of the tubercule bacillus. Kempner's father made the first antitoxin for management of Bacillus botulinis infection.2 His mother, the first female to be a medical professor in Germany, established the pathogenecity in humans of the bovine strain of Mycobacterium tuberculosis.

After completing medical studies at the University of Heidelberg in 1926, Kempner worked in 1927-28 and again in 1933-34 at Berlin's prestigious Kaiser Wilhelm Institute of Cellular Physiology in the laboratory of Otto Warburg, the 1931 Nobel laureate for cellular physiology.3 From 1928 to 1933 he was assistant physician at the University of Berlin School of Medicine and the Medizinische Klinik der Charité, a leading hospital in Berlin. 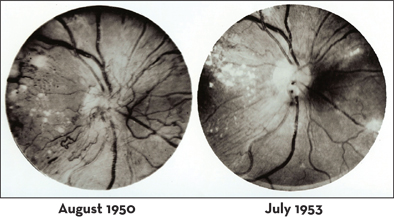 In 1933, Frederic M. Hanes, medical chairman for the fledging Duke University School of Medicine, looked eastward to Germany for a faculty recruit. Kempner, apprehensive of the anti-Jewish prejudice sweeping across Germany, accepted Hanes' proffer and became, in 1934, Duke's first full time department of medicine faculty member. His responsibilities were teaching and medical research.

At Duke, Kempner continued studies begun at the Willhelm Institute on oxidative and fermentative metabolism and by 1939 had published 23 reports — alone, in conjunction with associates, or by associates under his close supervision. His experiments with animal kidney tissues in a low-oxygen environment led to a far-reaching medical proposal: the use of a radical dietary regiment (rice/fruit with only 50 mg of sodium) to compensate for renal metabolic dysfunction. 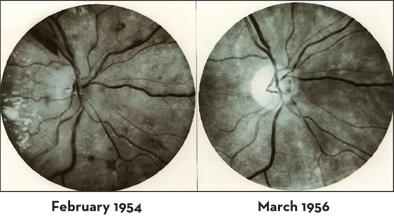 Initially, the diet was employed for patients with malignant hypertension for whom life expectancy was measured only in months. His salvage rate for such patients was remarkable, if not astounding. At the 1944 annual meeting of the American Medical Association, Kempner presented results which documented decrease in heart size, improved kidney function, and hypertensive retinopathy reversal.4 Soon, patients with vascular diseases learned of the dietary program and flocked to Kempner's Duke University clinic. Rather quickly, the medical center was transformed from a university hospital that offered local services to an internationally known institution for the treatment of vascular, cardiac, retinal, and renal diseases.

Kempner's results, outstanding by any measure, were dismissed by many medical professionals. Those who were able to observe firsthand were impressed, nevertheless. For those with kidney disease, in the words of Eugene Stead,5 the illustrious and much respected chief of internal medicine at Duke, "the edema, hypercholesteremia, hyperproteinemia, and hypertension responded well [to the Kempner regimen]". Then, in further defense of Kempner, Stead noted, "He demonstrated that nephrotic children wasting large amounts of protein [also] did well on the rice diet. The proteinuria decreased dramatically and the children showed good growth".

Banks Anderson, MD, head of the Duke Department of Ophthalmology, was also complimentary, as Barbara Newborg, MD, a longtime associate of Kempner recorded:6

"An ophthalmologist from Boston wrote,
questioning the validity of the eyeground
photographs, implying that they must in
some way have been falsified. The chairman
(Anderson) assured him that the pho-
tographs were made by Duke's medical
illustration department, and added, 'I have
seen these amazing results for myself.' "

Kempner commenced his dietary program in 1942 for patients with end-stage vascular disease, but rather quickly the concept was extended to all types of hypertension, to heart failure, to renal insufficiency and, in time, to diabetes, and obesity. He recognized that the latter was as serious a disease as hypertension.

In the 1950s, diuretics were introduced for the management of high blood pressure. And still later the direct application of Kempner's dietary regimen diminished as a large array of blood pressure medications — Beta blockers, ACE inhibitors, angiotensin antagonists, and calcium channel blockers — became available for the management of hypertension. Kempner could take solace in knowing, nevertheless, that his regimen could provide comparable, if not better, results.

In 1972, at age 69, Kempner became an emeritus professor at Duke. Honors finally began to come his way. The Archives of Internal Medicine published a Kempner symposium.7 A Walter Kempner professorship was established at Duke. In 1983, the German Bundespräsident conferred the Grosse Verdienstkrenz (highest Order of Merit) on Kempner. In 1997, at age 93, he died in his sleep after having experienced no premonitory symptoms. Kempner never married. The entirety of Kempner's estate, the principal of which consisted of a $7 million security portfolio, was left to the Duke University School of Medicine.

Kempner's 1958 diabetic retinopathy report was not reviewed in ophthalmological journals of that day for reasons that are not now apparent, and the oversight extended, in subsequent years, to textbooks devoted to the subject of diabetic retinopathy. Now, 50 years following the initial demonstration of diet-induced reversal of diabetic retinopathy, his contribution is given belated notice with publication of the foregoing material. RP