A relatively small group of systemic medications can cause a variety of retinal toxicities. The toxicities can be grouped into categories such as pigmentary retinopathies, crystalline retinopathies, retinal vasculopathies, and retinopathies characterized by retinal edema or folds. Here we present a case of topiramate (Topamax, Ortho-McNeil Neurologics) causing transient angle closure and retinal folds. We follow with a review of the literature regarding topiramate toxicity, as well as a brief review of the other major categories of pharmacologic retinal toxicity.

A 26-year-old woman reported to the emergency room with a chief complaint of sudden, painless loss of vision in both eyes. Her past medical history was significant for depression and migraine headaches. She had recently been started on topiramate for her migraines. In the emergency room, her vision was noted to be 10/200 in both eyes, her intraocular pressures (IOPs) by tonopen were 18 mm Hg OU, and computed aximal topography of the head was normal. Twelve hours later, she was seen by an ophthalmologist; her vision remained unchanged and pressures remained normal. She was noted to have shallow anterior chambers, and on undilated fundus examination, she was seen to have retinal striae in the macula of both eyes.

DISCUSSION AND REVIEW OF LITERATURE

Topiramate is a sulfamate-substituted monosaccharide approved for the treatment of seizures and prophylaxis against migraines. This medication was first reported to cause a syndrome consisting of acute myopia and retinal striae by Sen et al. in 2001.1 Subsequently, several reports described induced myopia and bilateral angle-closure glaucoma associated with topiramate.2-6 In all, over 115 cases have been reported since 2001.7 While the exact biochemical mechanism by which topiramate causes this syndrome is unknown, ultrasonography has demonstrated ciliochoroidal effusions causing forward movement of the lens-iris diaphragm. This secondarily causes myopia and angle closure. The retinal striae may be caused by mild vitreoretinal traction. Symptoms typically occur within 1 month of initiating topiramate therapy. All of the changes are usually reversible after discontinuation of the medication; peripheral iridotomy is not beneficial in this syndrome because the angle closure is not caused by pupillary block. In cases of very high IOP, Rhee et al.8 suggested that the combination of mannitol and methylprednisolone may induce a more rapid resolution after stopping the medicine. 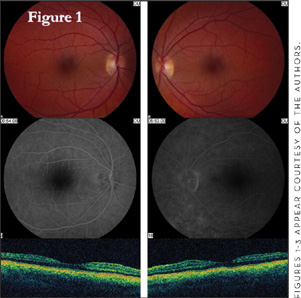 In addition to topiramate, several related medications (generally containing sulfa) may induce a similar syndrome of transient myopia, nonpupillary block-angle closure, and retinal folds. Again, the underlying mechanism is thought to be ciliary body swelling, choroidal effusion, and anterior displacement of the lens-iris diaphragm. As with our patient, FA generally shows no vascular leakage, supporting the concept that the folds are caused by mild vitreous traction on the macula. Other drugs associated with this syndrome include sulfanilamide,9 acetazolamide (Diamox, Duramed Pharmaceuticals),10 metronidazole (Flagyl, Pfizer),11 and hydrochlorothiazide.12 Similar to topiramate, when these other medications are identified and discontinued, the retinal abnormalities generally return to normal.

OTHER CATEGORIES OF RETINAL TOXICITY

Numerous other medications may also cause retinal toxicity. We will discuss the more common medications that cause pigmentary and crystalline retinopathies, retinal vasculopathies, and retinopathies characterized by macular edema. A more comprehensive list of medications is listed in the Table online at http://www.retinalphysician.com/toxicity/.

■ Quinolines. Chloroquine and hydroxychloroquine (Plaquenil, Sanofi Winthrop Pharmaceuticals) are quinoline antimalarial medications used in the treatment of autoimmune diseases such as systemic lupus erythematosis and rheumatoid arthritis. The toxicity associated with these drugs is bilateral bull's-eye maculopathy (Figure 2).13 The precise mechanism by which this occurs is unknown, but the drugs bind to melanin in the retinal pigment epithelium (RPE) and affect photoreceptor metabolism. In less advanced cases, the only findings may be loss of the foveal light reflex and nonspecific pigmentary abnormalities. In end-stage cases, atrophy of the RPE and retina may affect the entire fundus in association with retinal vascular narrowing, causing a retinitis–pigmentosa-like syndrome.

The American Academy of Ophthalmology recommended guidelines for monitoring patients on hydroxychloroquine therapy.13 Suggested at initiation of therapy is a baseline examination consisting of a dilated posterior-segment examination, along with Amsler grid testing or automated perimetry. Baseline fundus photographs and FA are helpful in patients with pre-existing macular pigmentary changes. Patients are classified as being at a higher risk of developing toxicity if they exceed 3 mg/kg/day of chloroquine, or 6.5 mg/kg/day of hydroxychloroquine (calculated based on ideal body weight), have been on medication in excess of 5 years, have a high fat level body habitus or renal or liver disease, or are older than 60. These patients should be monitored at least yearly. If signs of toxicity develop, the internist or rheumatologist should be consulted to determine if the medication can be discontinued. Toxicity may progress even after the medication has been discontinued.15

Figure 2a. Color photograph OD revealing a classic Bull's eye lesion in a patient on hydroxychloroquine therapy for rheumatoid arthritis. Figure 2b. FA highlights the area of pigment loss.

■ Thioridazine. Thioridazine is a phenothiazine antipsychotic agent known to cause a pigmentary retinopathy. While its use in the United States has declined over the years, recent case reports still have described toxicity due to both acute16 and long-term17 use. Toxicity manifests as decreased vision, nyctalopia, and dyschromatopsia.18 Mild, nonspecific macular pigmentary changes are seen initially and may be followed by salt-and-pepper pigmentary loss. This pigment loss may coalesce into broader zones of atrophy and eventually be followed by nummular areas of RPE loss and choriocapillaris (Figure 3).19 In severe cases, generalized changes may occur, including vascular attenuation, optic atrophy, and diffuse pigmentary alterations, with virtually complete loss of the choriocapillaris and RPE.20 Discontinuation of the drug may allow for spontaneous improvement on rare occasion; more commonly visual loss remains or even progresses. This is felt to be secondary to a continued decline in function of the previously damaged cells, rather than a prolonged effect of the drug.21 Therefore if a patient is found to have retinal pigmentary disturbance due to thioridizine, the medication should be discontinued.

■ Tamoxifen. The estrogen antagonist tamoxifen, an estrogen antagonist, is primarily used in the management of metastatic breast adenocarcinoma. Toxicity in the form of retinal crystals may be asymptomatic or may cause mild central visual impairment along with dyschromatopsia.22 These latter visual symptoms generally occur secondary to development of cystoid macular edema (CME).

White refractile deposits (crystals) in the posterior pole, generally in a circular pattern surrounding the macula, may be associated with pigmentary changes. In advanced cases, CME may develop. FA and OCT can confirm the presence of CME, though the crystals are not seen on FA.

Figure 3a. Color photograph OD of a patient on long-term thioridazine therapy who developed nummular pigmentary loss, which as seen on FA (Figure 3b), and also included loss of the underlying choriocapillaris.

Asymptomatic patients with retinal crystals may be monitored. Most patients may be continued on the medication, as it is truly needed in the treatment of their underlying disease process. Patients with documented vision loss or CME, however, should discontinue the agent to limit or prevent permanent visual compromise.23 It is estimated that approximately 2% to 3% of patients on the recommended therapeutic dose of tamoxifen will develop retinal crystals.

■ Canthaxanthin. Canthaxanthin is a carotenoid pigment used in vitiligo and photosensitivity disorders. Ocular abnormalities are rarely seen when canthaxanthine is used to treat these conditions. In some countries, the drug is marketed as an over-the-counter, oral sun-tanning agent. Toxicity is characterized by an asymptomatic ring of yellow-orange crystals in the macular region.24 FA is usually normal, but abnormalities may occur on perimetry, electroretinogram, electro-oculography, or dark adaptometry.25

When retinal crystals are seen on clinical examination, it is recommended that the patient discontinue the drug, since it lacks a true medical indication. Upon discontinuation, the crystals generally resorb slowly, with corresponding improvement in electrophysiologic parameters.26

■ Quinine. Quinine is an antimalarial associated with a distinct toxicity from that of chloroquine and hydroxychloroquine. Quinine is used for benign nocturnal muscle cramps and may cause toxicity with acute overdose. The syndrome is characterized by headache, nausea, vomiting, tremor, hypotension, and loss of consciousness and is associated with profound vision loss, which may be irreversible.27 There is mild retinal edema and venous dilation in the acute phase. Over several weeks, arteriolar attenuation and optic atrophy develop. Hemodialysis may be beneficial in the treatment of an overdose. Visual outcomes, however, are extremely variable. Even with recovery of central visual acuity, peripheral fields may remain constricted.

Several medicines have been associated with the development of CME. Latanoprost (Xalatan, Pfizer) and other prostaglandin agents may cause reversible CME, particularly in patients with a history of intraocular surgery, retinal vein occlusion, iridocyclitis, epiretinal membrane, or diabetes.28,29 The sympathomimetic agents epinephrine and dipivefrin (Propine, Allergan) are no longer commonly used to treat glaucoma in the United States, but they had been associated with CME, particularly in aphakic eyes.30,31

Finally, niacin is used to treat hyperlipidemia and hypertriglyceridemia. It causes an unusual toxicity that clinically resembles CME but lacks angiographic leakage.32,33 This pseudo-CME is probably caused by intracellular fluid accumulation, as opposed to true edema, which is in the extracellular space.34 Treatment is discontinuation of the medication, which generally allows for rapid resolution of the pseudo-CME and restoration of visual function.

We describe here a case a 26-year-old female with transient visual loss, narrow angles, and retinal striae after starting topiramate for migraine headaches. Signs and symptoms resolved after discontinuation of the medication. Topiramate likely causes this syndrome by causing ciliochoroidal effusions and forward movement of the lens-iris diaphragm, in turn leading to myopia, angle closure, and vitreomacular traction. A number of other medications, mostly containing sulfa, can lead to a similar syndrome.

Numerous other medications can cause a variety of retinal toxicities in the setting of therapeutic or supratherapeutic dosages. General patterns of toxicity include pigmentary retinopathies, crystalline retinopathies, retinal vasculopathies, and macular edema. It is important to elicit a careful history in patients with possible medication-induced retinal toxicities, as discontinuation of the medication can in many cases prevent further visual loss or even lead to restoration of vision. RP