Not Just a PVD: Differential Diagnosis of Flashing Lights

In 1935, R. Foster Moore first described subjective vertical streaks of light in patients who had normal fundus exams and whom he thought had a rupture of a peripheral retinal cyst. He felt these to be of no sinister consequence. Six years later, Verhoeff more correctly made the association of Moore's lightning streaks with vitreous shrinkage, but still had no proof of its prognostic importance.1 In 1954, Berens was able to draw the conclusion that these subjective streaks may not be benign but can be associated with a variety of ocular pathology including focal infection, choroidal tumors, and retinal detachments, obligating the ophthalmologist to pursue a diligent clinical exam when "flashes of light" is a chief complaint.2

Flashes of light, photopsias, or phosphenes are an entoptic phenomenon. Entoptic images are visual perceptions that are produced or influenced by structures within the eye. They may arise from opacities in the ocular media or from normal landmarks or pathologies of the ocular fundus. The most recognizable entoptic phenomenon can be observed by rubbing the eye or applying oculodigital pressure to the globe, eliciting a circular and perpendicular pattern of lights. Another example of entoptic phenomenon is the ability for patients to see their retinal vasculature during a slit-lamp exam or by indirect ophthalmoscopy.

The entoptic phenomenon of momentary phosphenes or flick phosphenes can occur in the eye with quick eye movements in normal, healthy individuals, as described by Nebel3 and personally observed by Verhoeff. These phosphenes that occur in normal eyes share a common pathophysiology with eyes having pathology: mechanical stimulation or irritation of retinal receptors. A detailed clinical history, family history, and dilated funduscopic examination will help differentiate the ominous causes of flashes of light, especially in patients with a normal-appearing fundus. A unifying principle in evaluating the differential diagnosis of "flashes" is that, while unilateral photopsias most often point to local ocular causes, bilateral symptoms typically describe chiasmal or retrochiasmal etiologies and systemic processes.

The top 3 most common causes of unilateral photopsias or phosphenes that an ophthalmologist will encounter are caused by (1) posterior vitreous separation, (2) retinal break/tear, and (3) migraine with aura (with or without headache). Less common causes included in the differential diagnosis of photopsias or phosphenes will be discussed briefly and listed as predominantly unilateral or bilateral in nature.

UNILATERAL CAUSES OF FLASHES OF LIGHTS

Monocular photopsias can be broken down into 3 categories: mechanical, inflammatory, or vascular. Mechanical stimulation of photoreceptors by vitreous traction on the peripheral retina during vitreous separation or retinal tear is the most common etiology. Posterior vitreous detachments (PVDs) occur in most patients over 50 years of age, with up to 40% of patients with acute symptomatic PVDs experiencing flashes of light.4 Fifteen percent of these patients will have a retinal tear, while patients without evidence of a retinal tear have a 2% to 5% chance of developing a retinal break in subsequent weeks.5 Photopsias can subside after the vitreous has fully separated or after retinal detachments or breaks have adequate chorioretinal adhesion and relief of vitreous traction (Figure 1). 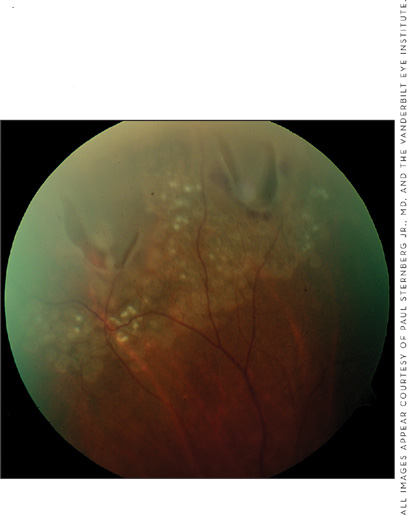 Figure 1. Patient with 2 horseshoe tears in periphery with complaints of photopsias prior to laser retinopexy.

Flashes of bright light induced by eye movement in a dark room have been reported in normal patients3 but also in patients with optic neuritis and multiple sclerosis.6 It has been proposed that these phosphenes are induced by mechanical effects of movement on sick peripapillary receptors of an abnormal optic nerve.

Inflammatory causes of photopsias are due to outer retinal or photoreceptor irritation from focal infection or inflammation. Flashes of light have been described in ocular toxoplasmosis7 and birdshot chorioretinopathy/vitiligo chorioretinopathy8 and in the spectrum of diseases that includes acute zonal occult outer retinopathy (AZOOR), multiple evanescent white dot syndrome (Figure 2), acute idiopathic blind-spot enlargement syndrome, punctuate inner choroidopathy, multifocal choroiditis and panuveitis, and acute macular neuroretinopathy.9-12 In AZOOR, photopsias are a frequent and important diagnostic symptom, accompanying visual loss or visual defects in up to 70% of eyes. Photopsias can either precede or follow onset of visual loss. They have been described as occurring in the field of the visual loss with the quality of flickering or shimmering.13 An antecedent viral-like illness has been described in association with the onset of most of these conditions.

Photopsias due to uveal melanoma,2,14-15 uveal metastasis,16 and choroidal hemangiomas17 may be explained by both an adjacent inflammation and a tractional/mechanical process by a subretinal or retinal mass effect.

Other examples of a combined inflammatory and mechanical stimulation of phosphenes, but from an extrinsic, periocular source, are sinusitis/ethmoiditis2 and possibly thyroid eye disease.18 In thyroid eye disease, Danks and colleagues18 propose that tight inflamed inferior recti or traction of the inferior recti in upgaze can cause local extrinsic distortion of neural receptors (much like rubbing the eye) and yield superior flashes of light or photopsias. 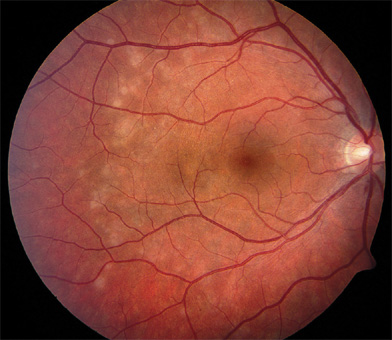 Vascular causes of unilateral phosphenes include retinal vasospasms. Patients often experience monocular transient loss of vision accompanied by a pattern of flashing lights, similar to that of transient ischemic attacks. Retinal vasospasms, often incorrectly referred to as retinal/ocular migraine,19 are seen in less than 1% of patients with a previous history of migraine. Affected patients are usually under 40 years of age20 but also have been described in children.21 These symptoms are explained by transient retinal hypoperfusion19 and can be brought on by bending over or exercise, usually lasting less than 30 minutes.20,22 Funduscopic exam rarely will reveal narrowing of retinal vessels during the symptomatic attack without other associated neurologic findings. This diagnosis must be a diagnosis of exclusion, first ruling out amaurosis fugax from vascular occlusion. Similarly, transient ischemic attacks or even a cerebrovascular accident can present with temporary vision loss accompanied by photic sensations; a thorough neurologic history and exam should be taken immediately.23-24

A photic phenomenon that can blur the diagnosis in the setting of flashes of light in a normal-appearing exam include dysphotopsia from intraocular lens (IOL) placement after cataract surgery, termed pseudophakia dysphotopsia. Patients experience flashes, streaks, or reflections emanating from a central point of light that has been reported to spontaneously resolve in two-thirds of patients. These lights are due to illusions and not true phosphenes. Symptoms can be severe enough to warrant IOL exchange and may be related to artificial lens material or shape.25

Migraine is also a common cause of unilateral cases of flashes. Twenty-eight million people in the United States are affected by migraine. Migraines have a specific time course and succession of events and can occur with or without aura. The auras usually precede headaches but can also follow the onset of headaches. Among the auras, visual auras are the most common and are often described as having a shimmering and scintillating quality that begins in the central vision and evolves into a small scotoma with zigzag lights and colors that outline the scotoma. As time goes by, this scotoma enlarges and moves temporally into a crescent shape with the open area closest to the center of the visual field. The aura usually develops over 4 to 6 minutes, progresses for 30 minutes, and subsides before 60 minutes.26

Less than 3% of migraine sufferers develop aura without subsequent headache, previously termed acephalgic migraine and sometimes confused with other causes of photopsias in light of a normal fundus exam.26 These patients may have a strong family history of migraine without a personal history of migraine. This entity and unilateral retinal vasospasms can be easily confused, but there should be a diagnosis of exclusion to rule out cerebral ischemia.27 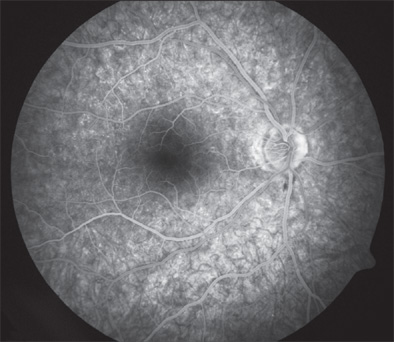 Auditory-visual synesthesia is a rare example of unilateral phosphenes induced by sound. Specifically, patients with subacute or chronic optic neuropathy can experience photopsias or waves of light/colors when normal sounds are heard by the ipsilateral ear. These sounds are usually recognizable, although startling to the patient and may resolve if the neuropathy improves.28

BILATERAL CAUSES OF FLASHES OF LIGHTS

Bilateral causes of phosphenes or flashes of lights can be grouped into vascular effects on the cerebral cortex, medication-related side effects, and bilateral retinopathies.

The most common cause of bilateral flashing phenomenon is migraine with aura, although it is unilateral in up to 70% of patients.26

Since bilateral symptoms often point to the cerebral cortex or postchiasmal pathology, it is not surprising that ischemia or edema to the cerebral cortex including the visual cortex can cause bilateral symptoms of phosphenes. Reported unusual causes of phosphenes include local cerebral edema to the temporal-occipital lesion in an occipital dural arteriovenous malformation,29 cortical injury to both occipital lobes after removal of a posterior falx meningioma.30 and infarct of the occipital lobe presenting as an atypical migraine causing photopsias in 1 patient in Japan.31

The bilateral perception of widespread flickering or "snow" on a television screen can point to various forms of drug-related side effects. Drugs such as digitalis, quetiapine (Seroquel, AstraZeneca), paclitaxel, quinine, and quinidine32-36 have been implicated in patients who may have an otherwise normal-appearing exam, although the pathophysiology remains unknown. Photopsias have also been reported in a patient with occupational contact with fish anesthetic M-222, which resolved after treatment.37

An uncommon cause for bilateral luminous images is the Charles Bonnet syndrome. In this condition, often seen in patients with vision loss from age-related macular degeneration, the source of light is a visual hallucination arising from the visual cortex after deafferentation from the central visual pathway.44

Flashes of light are a common visual symptom, most often warranting an urgent retinal exam to rule out a retinal tear or retinal detachment from the mechanical effects of vitreous tugging on the retina. However, there is a lengthy list of possible conditions that can lead to this complaint. In generating a differential diagnosis, it is helpful to distinguish unilateral photopsias from bilateral. While photopsias are often seen as part of the "aura" associated with a unilateral ocular migraine, migraine is the most common etiology for patients with bilateral flashes. RP